Top
Home / Software / Tired of Skype? These Are The Best Skype Alternatives 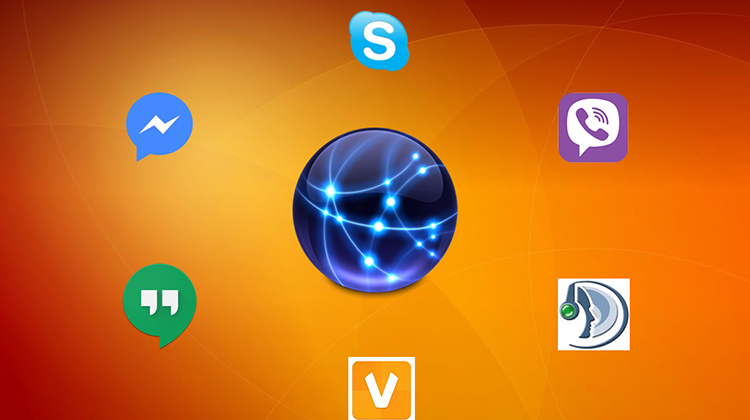 The Internet has made it simple, easy, and cheap to communicate with people on the other side of the world. Skype might be the most popular communication app, but it's not perfect. If Skype doesn't work well on your devices, or you just plain don't like it, in this guide we will check the best free Skype alternatives. Between them, you are sure to find one that fits your personal needs and preferences.


The beginning of online calls

The idea to transmit audio and video through the Internet was first developed during the 70’s. Due to technical limitations, however, it was at the very beginning of the 21st century that real-time audio and real-time video began to increase significantly regarding public distribution.

The bandwidth that telephone calls can cover is relatively small (64Kbps uncompressed). Because of the incremental development of the bandwidth, companies were able to switch to Internet calls using the bandwidth strength, to minimize the cost of their telephone bills.

Programs such as Skype gave customers the opportunity to make their phone calls via the Internet.

The result was the rapid increase of the audio input transferred through the Internet networks, and it is known as voice over IP, VoIP, or Internet Telephony.

Skype is one of the most popular applications for Internet calls, if not the most popular. Skype made its debut in 2003, while from 2011 the rights belong to Microsoft, who paid 8,5 billion dollars to buy the app.

The application supports a wide variety of devices. Among them, we can find smart TVs, wearable devices, and the X-box. The list also includes mobile phones and computers.

With Skype, we can contact other users with voice or video calls, no matter their location or distance. It is also possible to send text messages, video messages, photos, or any other kind of data, such as GIFs, documents, etc. 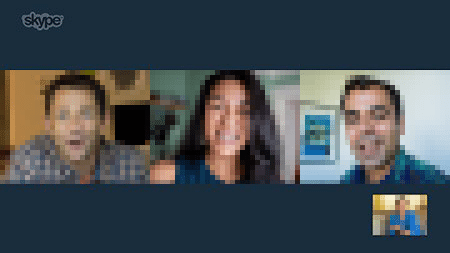 Furthermore, Skype gives us the option to share our screen during a call, which is a rather handy feature.

As we already mentioned, the application runs on a broad range of devices and supports Windows, Linux, Android, and iOS.

Finally, we can access Skype on multiple devices with the same account. The synchronization between the different devices is done automatically, provided the user logs in with their account.

There are several more applications that are as popular as Skype and offer similar features. Below we will see the best Skype alternatives for every usage.

Viber is one of the best Skype alternatives since it offers many high-quality features at no cost. 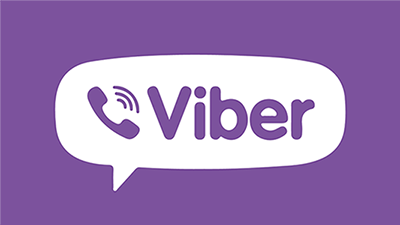 Viber launched in December 2010 for iPhone devices, and on the 19th of July 2012, it became available for Android devices as well.

To use the application, the only thing we need is our cell phone number.

It is also possible to share stickers, which come in the form of thematic bundles and that we can download from a vast library. Many packages are available for free, while there are also some paid ones. 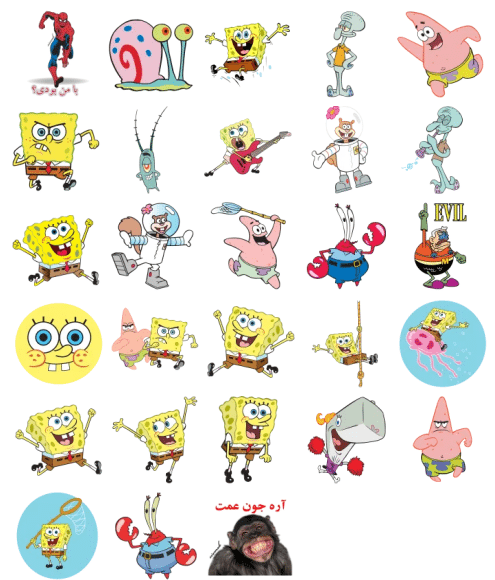 Unlike other apps, Viber does not require to add contacts on your contact list. After installing the application, the user can see which of his phone's contacts use the app.

Viber is available on Android, iOS, Windows, and Linux, and we can synchronize our contacts automatically.

Messenger is perhaps one of the best-known means of social networking. From 2008, the ability to send messages via Facebook was passed down to Messenger.

Apart from sending text messages, emoticons, photos, and other types of multimedia content, Messenger is also capable of video calls.

Thus, it is considered as one of the best Skype alternatives for those who seek to use only the basic features regarding communication.

Messenger is an all-in-one application, and its user-friendly interface offers calls of high quality. With a few clicks on the screen, you can contact your Facebook friends by initiating either voice or video calls. 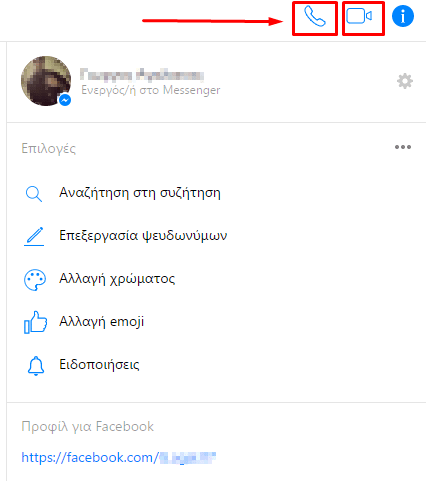 Of course, with Messenger, we are not limited only to the above functions. We are also able to do other things simultaneously during a call, such as send emojis, Likes, or to share our screen.

About a year ago, the developers announced users would be able to receive and send SMS through Messenger. Even though they implemented the feature, it is available only on Android devices.

Google Hangouts is an online application offered by Google, and it is the successor of Google Talk. It was released in May 2013.

Its user-friendly interface is one of the best characteristics of Google Hangouts. Despite not being as popular as the other apps, it offers an innovative service named Hangouts Live which makes it a rather competitive application. 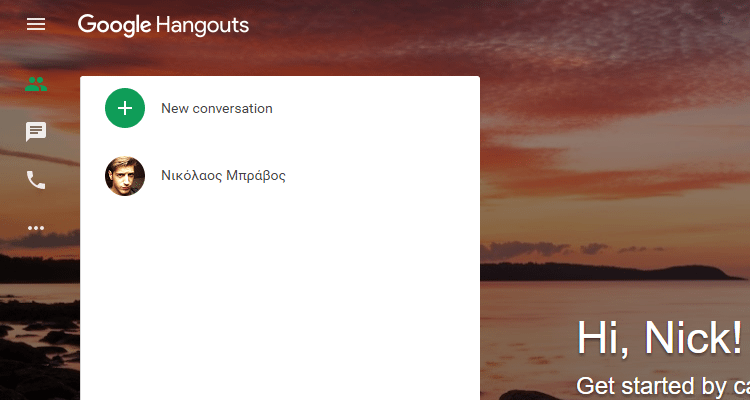 Using Hangouts, you may contact one or more users with text messages, send emojis, stickers, images, GIFs, or even share map directions.

The group call room may accommodate up to 10 users while the maximum size of the chat room in Hangouts may reach 100 users. 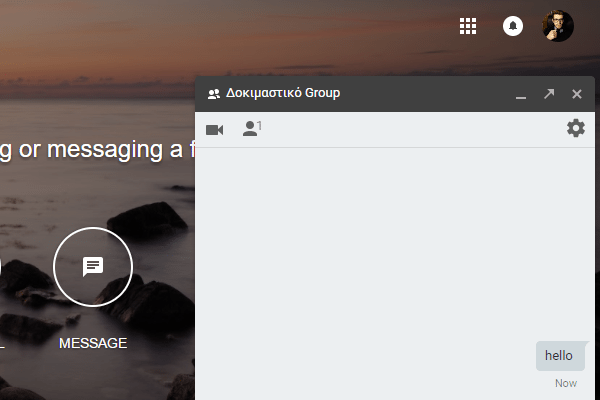 Finally, the fact that the application supports Android and iOS operating systems, as well as computers connected to the Internet, make it a considerable Skype alternative.

Google, however, announced at the beginning of 2017 that they would separate Hangouts into two different and more specialized applications. With Hangouts Meet, the user will be able to make voice and video calls, while on the other hand Hangouts Chat will take over the text messages.

With Hangouts Meet, the user will be able to make voice and video calls, while on the other hand Hangouts Chat will take over the text messages.

OoVoo launched in 2007 for Windows, while in 2008 Mac computers started supporting it as well.

The program is pretty straightforward since it offers a rather user-friendly interface.

The user can contact one or more friends with voice or video calls. It’s worth mentioning that the quality of the calls is excellent. 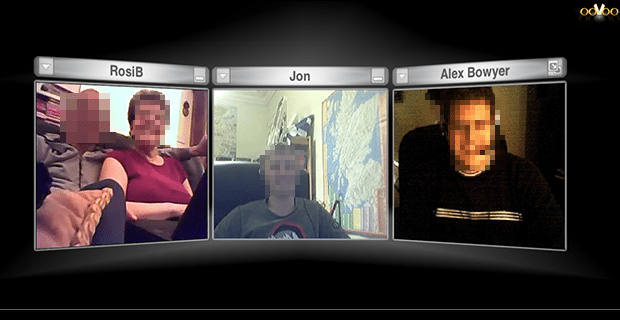 OoVoo offers the ability to save our calls in video form. Programs such as Skype require additional software to be installed to do the above.

Moreover, with Oovoo it is possible to call anyone that has Skype, which makes it one of the best Skype alternatives since we won't have to pressure our skype contacts to migrate to a separate client.

WhatsApp is one of the best and most popular Skype alternatives. The company was founded by Jan Koum and Brian Acton, former employees of Yahoo.

It is worth mentioning that the application processes over 30 billion messages daily.

One of the main features of WhatsApp is the automatic contact registration. After the registration is complete, the user will be able to see which of his contacts use the application.

It is also possible to share information regarding a destination, as well as photos or even our status. WhatsApp also allows users to send up to 100 messages to friends that don't use the application.

Discord is another popular application, which targets mostly the gaming community. In May 2017, the user-base of Discord reached over 45 million users.

The app is available for Windows, Mac, and Linux, but we can access it remotely through our browser.

Discord’s key strength is the fact that the application sustains its own servers. Therefore, users are not obliged to host a call as in Skype, negating thus the possibility for potential call drops.

Another positive aspect of Discord is that it offers maximum security to its users by concealing the IP address and encrypting the information of its clients. 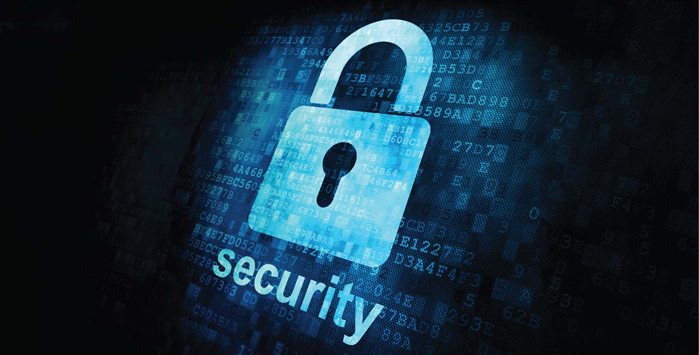 Besides, it provides automatic recovery in case of server crash. In such situations, Discord guarantees data transfer to a functional server with minimum downtime and without any data loss.

With Discord, it is possible to create "rooms," which are private or public groups. 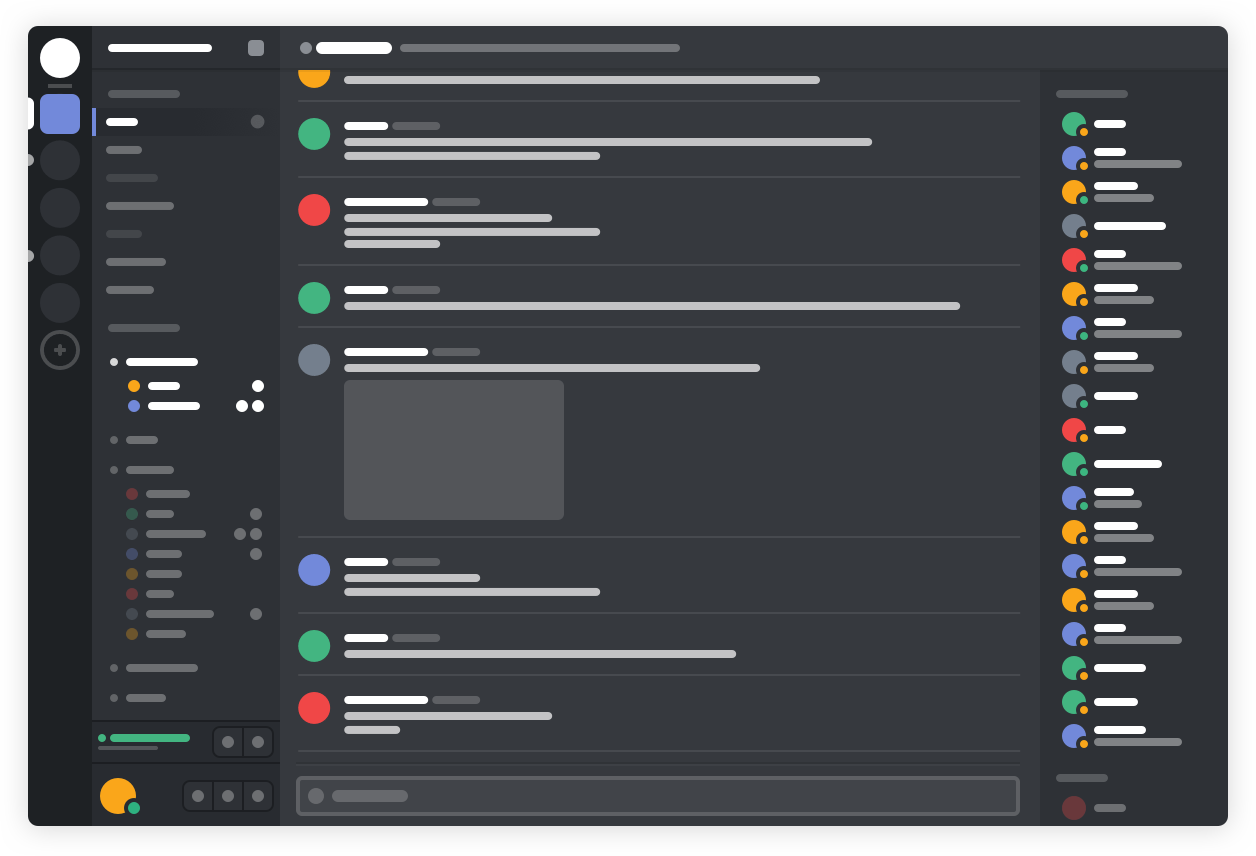 The user may also tweak the different authorization levels of a single user or even a group of users.

The administration can manage the whole room, restricting or enabling these actions for any user.

The ability to create individual channels inside the same room makes Discord one of the best Skype alternatives for gamers. If you create a new channel, you can pick specific users from the same room and start your communication.

One of the advantages of Discord that gives it an edge over Skype is that it requires less processing power. Thus, it can prevent frame drops in case the user runs demanding programs simultaneously, which is usually the case with all new high-end games. 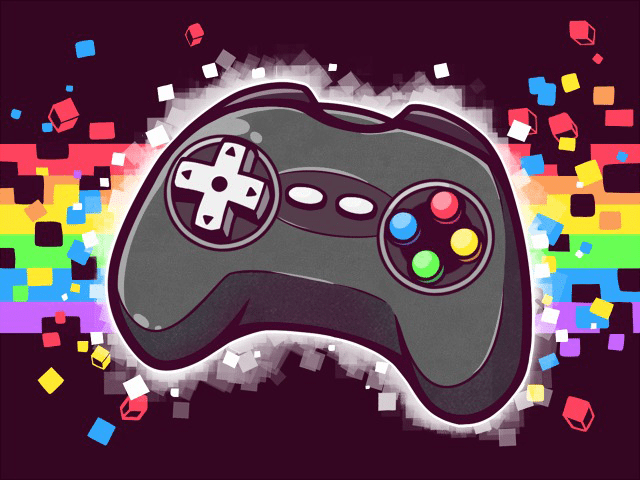 Some other innovative features are echo nullification, timing jitters, buffers, and the user-friendly design, as well as its productive chat functions. 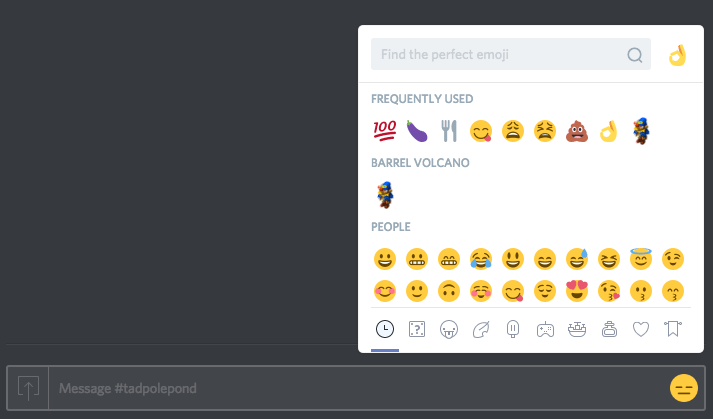 However, Discord does not support video calls, and therefore it might not be the best option for someone who seeks this feature.

As a closing note, we will take a look at another application which is very common amongst gamers and e-sports. This application is TeamSpeak 3.

Its beta form released around the end of 2009.

TeamSpeak 3 provides many options, but overall we wouldn't say it is a user-friendly app.

As for the processing power, the application is not demanding at all, while it is considerably versatile. It provides the option for group calls of up to 32 people. Moreover, it offers administrators many tools and functions that help them in the management of the servers.

Apart from the popular applications above, there are other less known but worth mentioning programs that could be valuable if by any chance you haven't found what you were looking.

These programs don't offer any new features from the ones we already mentioned, and thus we won't analyze them in detail.

Ekiga is an open-coded application mostly used by Linux systems, but it supports Windows devices as well.

However, nowadays Linux systems use Empathy.

Jitsi is an open source application. It is available for all operating systems and supports many languages.

The truth is that we could not omit Mumble from our list. Mumble looks a lot like TeamSpeak 3, and it uses a client-server system. 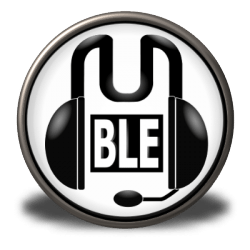 Linphone is an internet based communication program which uses the VoIP protocol. It is rather difficult to use, and it aims mostly at more advanced users.

Which do you consider the best Skype alternative?

Which application do you use for your internet calls? Did you like the Skype alternatives mentioned above?

Is there any other application that you think is worth mentioning? We would be more than happy if you shared your thoughts with us in the comment section.

Nikos Bravos is on the final year of his BA studies in the department of computer science of the Aristotle University of Thessalaoniki. From a very young age he showed a keen interest in programming and music and thus he started getting involved with the above fields. Nikos wants himself to be always up-to-date with the latest technological developments while he is highly interested in matters concerning artificial intelligence. Nikos is also a fan of fantasy literature, with J.R.R Tolkien being his favorite author.

Previous Post: « The Best Free Screen Recording Applications for Windows
Next Post: How to Install KeePass in Linux Mint / Ubuntu »