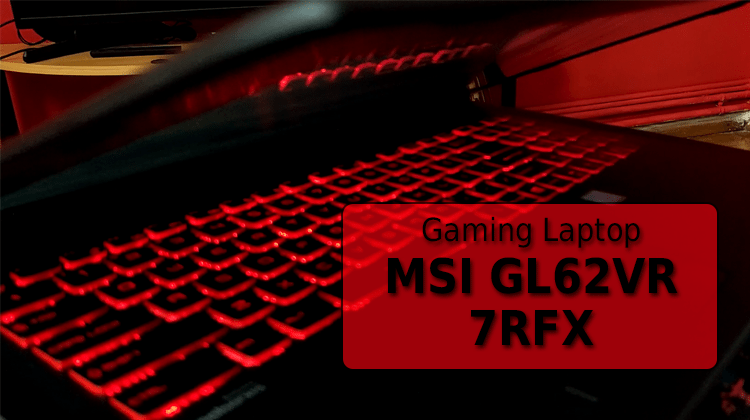 MSI is one of the best-known brands when it comes to gaming. The company releases a wide variety of gaming products, including laptops, desktops, monitors, motherboards, graphics cards, and so on. In this review, we got our hands on one of MSI’s gaming laptops, the MSI GL62VR 7RFX, which claims to be a value-for-money but still high-end laptop that will cover any gamer’s needs.

We must admit, the company seems to have a huge problem when it comes to naming its products.

MSI GL62VR 7RFX is not easy to spell or to remember. The rest of their laptops have similar names. We can’t tell the difference, for us it’s like random characters, but - who knows - the company may have a reason for this. 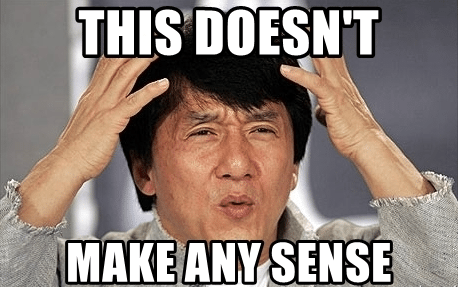 Anyway, most people know that MSI specializes in gaming gear. It’s obvious we’re not going to see one of their laptops in an accountant's office, for example.

When it comes to specs, the MSI GL62VR 7RFX - which we will refer as MSI GL62VR from now on - is equipped with high-end hardware.

It has Intel's 7th generation Kaby Lake i7 7700HQ. Its frequencies vary from 2.8Ghz to 3.8Ghz. We are talking about a 4-core and 8-thread processor with high performance on multitasking.

Besides the integrated graphics card (Intel HD 630), which is pretty irrelevant to gamers, it also has a dedicated Nvidia GTX 1060 with 6GB of VRAM.

In 1080p, it will play any demanding game we throw at it. We should also mention that the laptop has a 1060 3GB version as well, so we should check out the full specification list before we buy it.

As for storage, it has a fast SSD m.2 NVMe with 128GB for the operating system, as well as a 1TB HDD so we can store our files.

The screen is a FullHD TN panel, but according to MSI, there might also be an IPS version. More on that below. 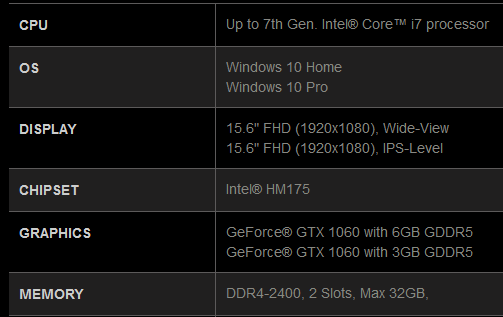 You can find all the specification here in detail.

At this point, we want to thank Gearbest for sending us a sample for this review.σίασης.

The box is simply beautiful, and it fits perfectly on a gaming laptop. 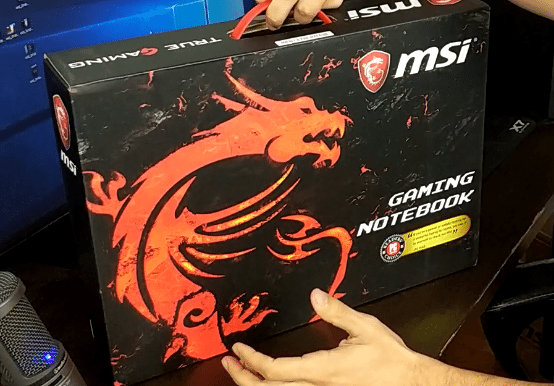 Once we opened it, we found the laptop in a protective bag. 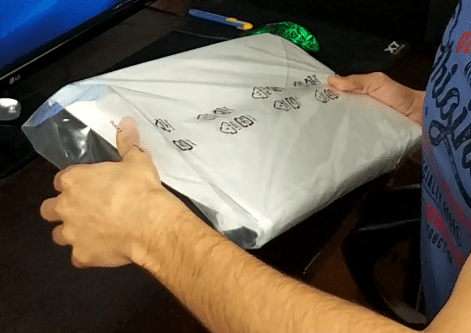 Further below there are three boxes. The two side-ones contain the power cable and the charger. In the biggest box in the middle, there's the manual, the warranty, and other MSI leaflets. 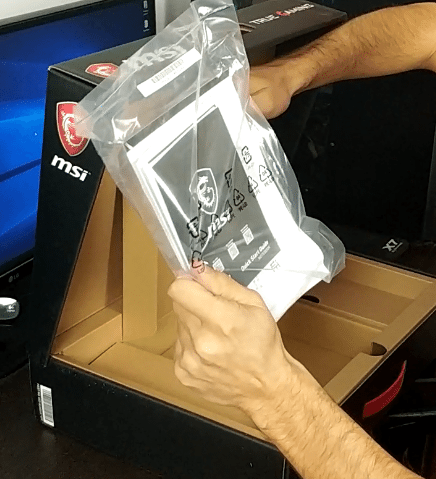 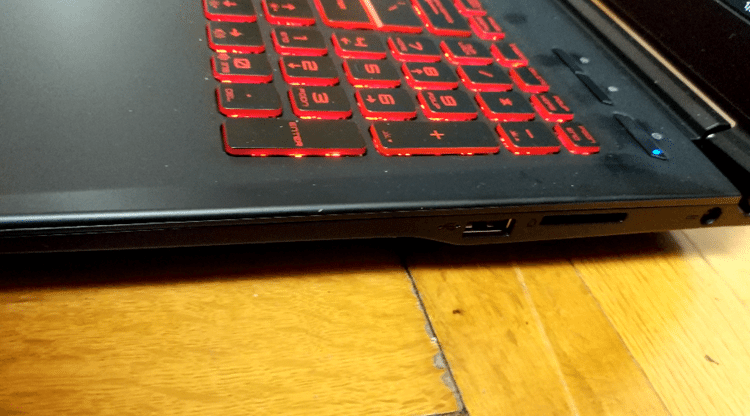 On the left side, there is a ton of ports. More specifically, we'll find an audio jack, a USB-C and two USB 3.0 ports, an HDMI and mini display ports, as well as an ethernet port. 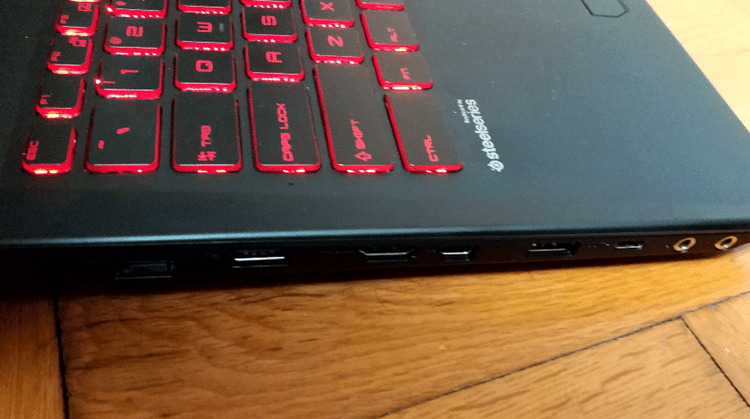 At the bottom, the MSI GL62VR is full of grills for better cooling. With this hardware, it's only natural to heat a lot. 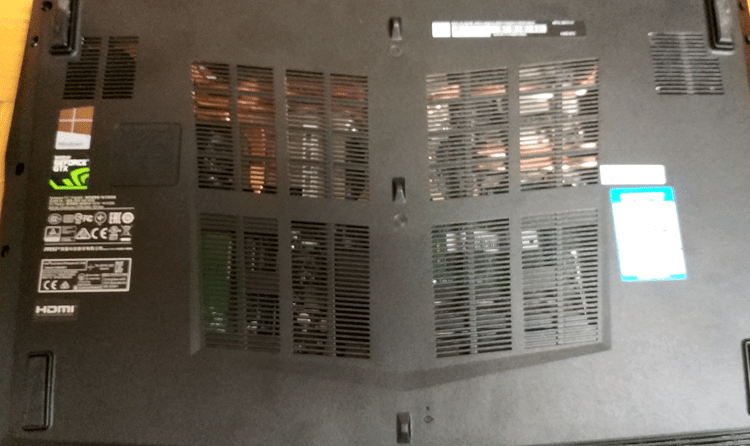 Opening the laptop, we will see only an Intel sticker next to the keyboard. The rest of its surface is clean. The screen's bezels are a bit thick; it's definitely not a minimal, bezel-less laptop. 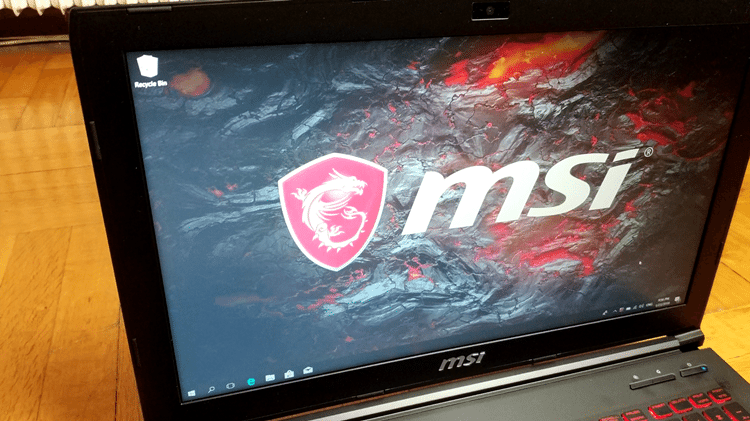 The keyboard is beautiful with a red outline, and it's the first you look at when you open the laptop. It's also the first you notice on the first boot since it has red backlighting. 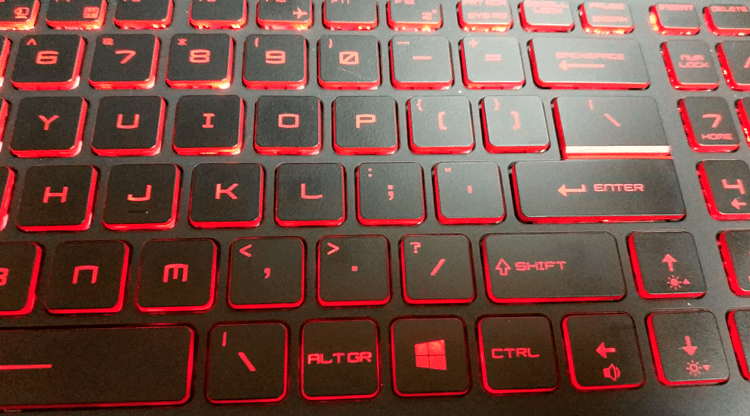 And since we're talking about keyboards, this one is made by SteelSeries, a company that specializes in gaming keyboards.

Above the keys, there are three extra buttons. The first one on the right side is the power button. The next one can be used to open the MSI Dragon Center software, and the last one is to activate maximum fan speed. 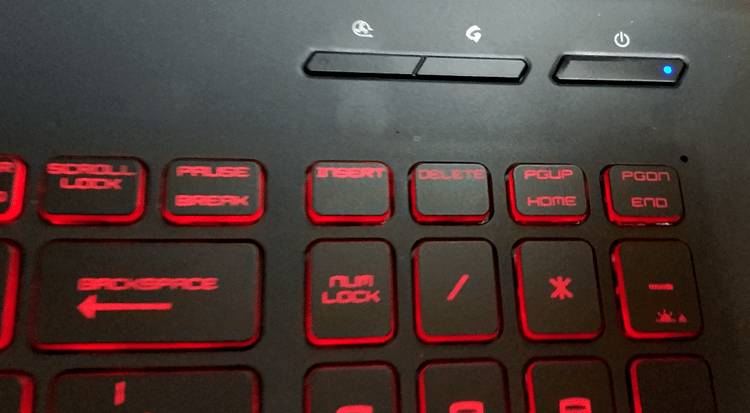 The whole construction seems robust, but the frame is made of plastic. That means you will leave your fingerprints all over it, and it won't be that easy to clean.

On Gearbest's description, we noticed they mention an IPS display. 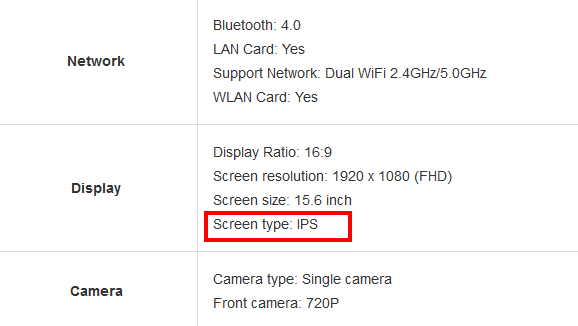 However, we realized that it's a TN panel. We happen to use an IPS screen daily, so the difference in colors was more than evident. Furthermore, once we changed our viewing angle, it became more apparent. 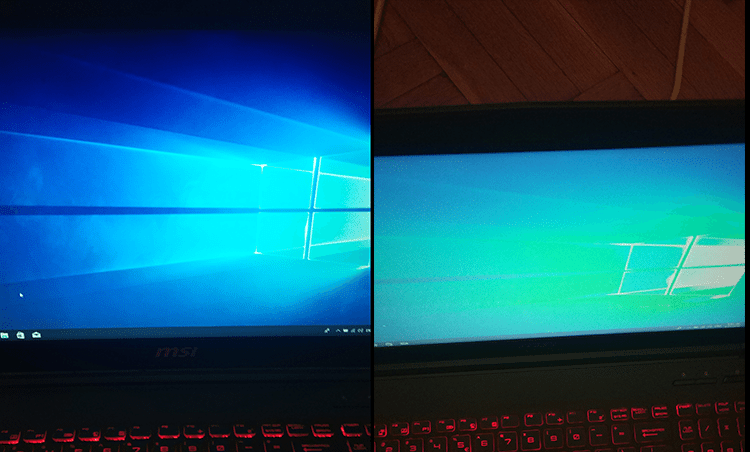 With a little bit of research on MSI's website, we figured out that they might have an IPS version as well. However, they don't mention any difference in the product's name. Thus, it's easy to get confused.

We don't know if MSI has the specs wrong, or if there's actually an IPS version. In fact, they mention it as "IPS-Level," which might mean that it's close to IPS' colors, but not IPS.

Anyway, we informed Gearbest of our findings and the possible mistake in their description, so as they can change it.

The first time we booted the machine, everything was in Chinese. We couldn't understand a thing, so we proceeded with a clean installation of Windows 10.

We didn't have to use any product key. Once we connected to the internet, Windows 10 activated automatically.

We also checked the BIOS, which was in Chinese as well. 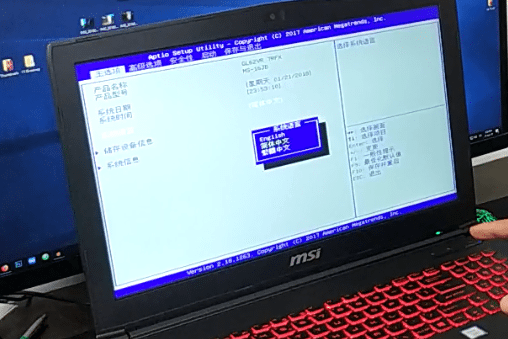 To change it, we had to access it with Delete during the boot. We then selected the third option in the first tab, we switched to English and pressed F10 to save and exit.

We don't have much to say about the performance. And that's because we were speechless, regarding its speed. For the ten days we used it, it didn't lag on any workload we put it through, and it did great even with rendering.

On the matrix below, you can see its scores on various benchmarks. 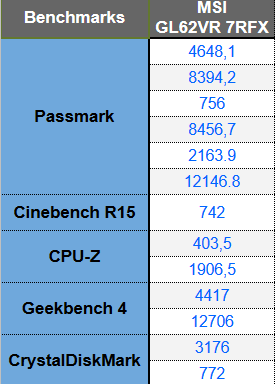 While under stress, its temperatures reached 78oC, even with the maximum fan speed. 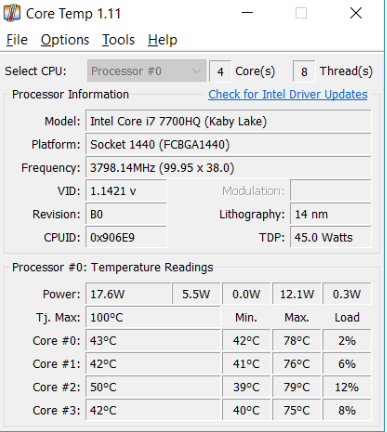 The SSD drive is impressive. Since it's an m.2 NVMe, it reached a high score of 3176 MB/s and 772 MB/s for reading and writing. These speeds are way higher than a simple SATA SSD. 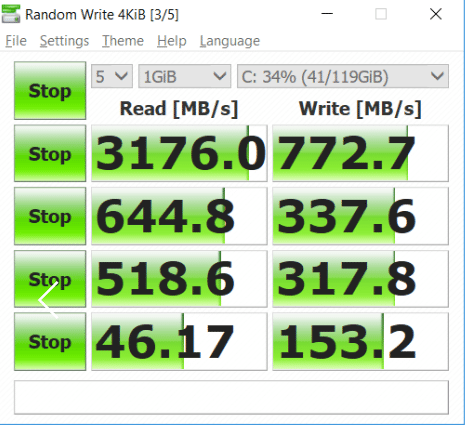 As for the HDD, apparently it was at a lower range, but still fast enough for every usage. 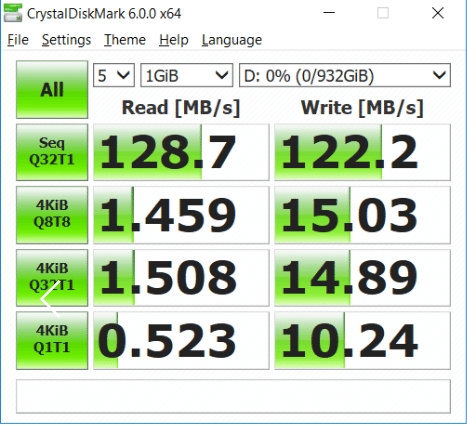 For the battery, we didn't expect it to last more than 2-3 hours during gaming, and that's normal. No serious gamer plays without plugging the laptop into an outlet. On average usage though, it took about five hours to drain the battery completely.

For gaming, we tested several titles, such as Watch Dogs and Assassin's Creed Black Flag, on which it did great.

The only negative we can think of is the TN display. In comparison to an IPS screen, the color difference was a bit obvious.

However, it is worth mentioning one of the most popular games out there, that is also notorious for low fps and lags: PlayerUnknown's Battlegrounds (PUBG). 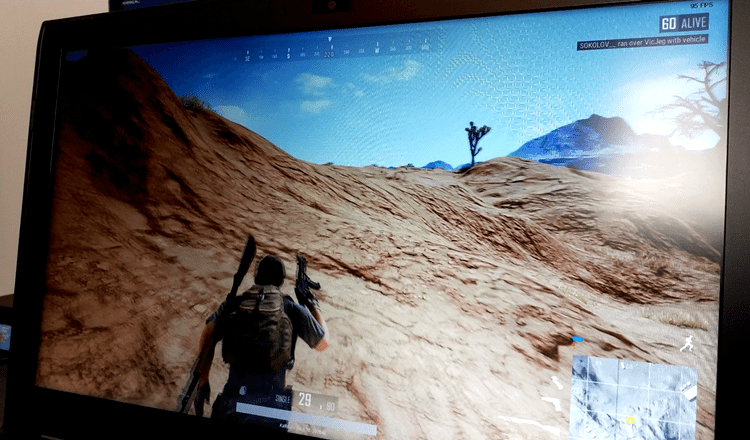 We had the chance to try the game on the MSI GL62VR, and we must say we didn't experience any lags whatsoever, with the graphics settings at ultra. Our in-game fps were on average at 85-95, while rarely they got below 60. 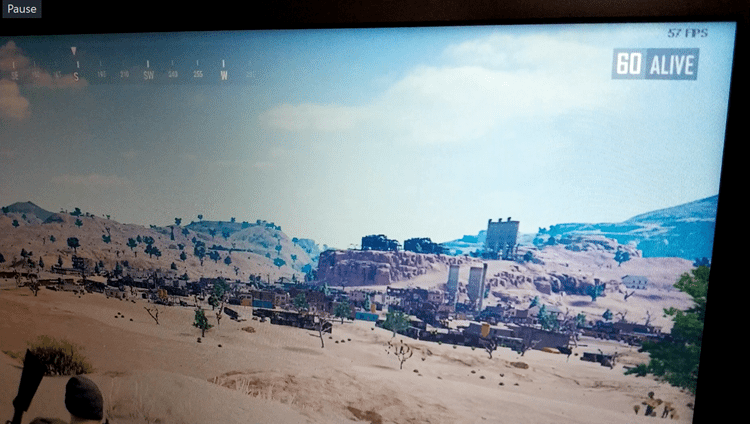 The gameplay, in general, was flawless, and that includes the sound, which was great.

MSI is one of the few companies that offer worldwide warranty for their products.

In laymen's terms, that means if we have any problems, we can send the laptop to the closest MSI support center, even if we bought it from a retailer in China. 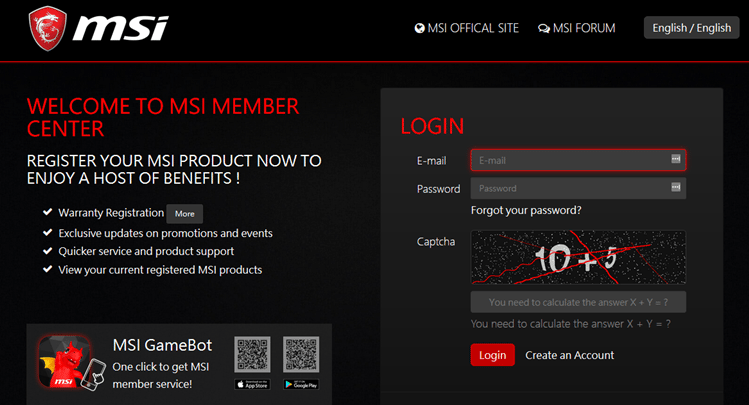 ... and registration of our product's code. 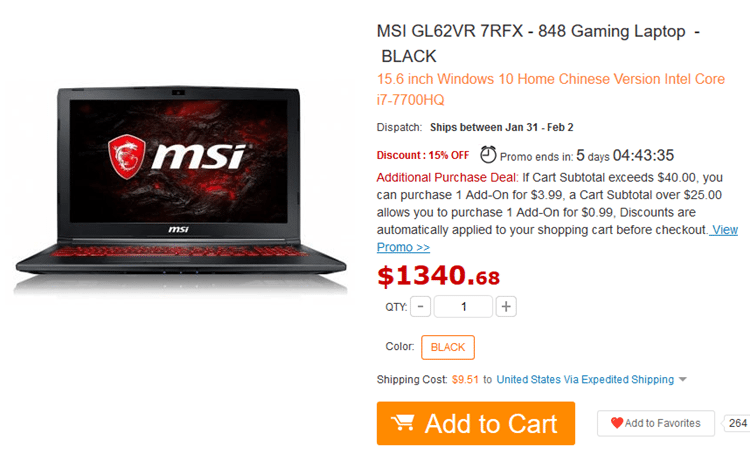 We can build a desktop with that budget, that's for sure, but we won't find a decent gaming laptop at that low price. In other words, the product is worth 100%.

If we think that it has a 7th-generation i7, the Nvidia 1060 with 6GB, a super-fast m.2 NVMe SSD as well as an HDD, along with 8GB RAM, we can't think of a better gaming option.

For example, if you are looking for a 17-inch gaming laptop, and a bit lower budget, you may consider this product, sacrificing from the graphics card (Nvidia 1050ti).

If we had to find some cons, we would definitely mention the non-IPS screen, and the slightly noisy fans while gaming.

The MSI GL62VR is a very tempting solution when it comes to high-end gaming laptop with a rather low budget.

Previous Post: « What Is IP68 And All Other Ratings In A Waterproof Phone
Next Post: What is Internet Addiction - Symptoms & Treatment »