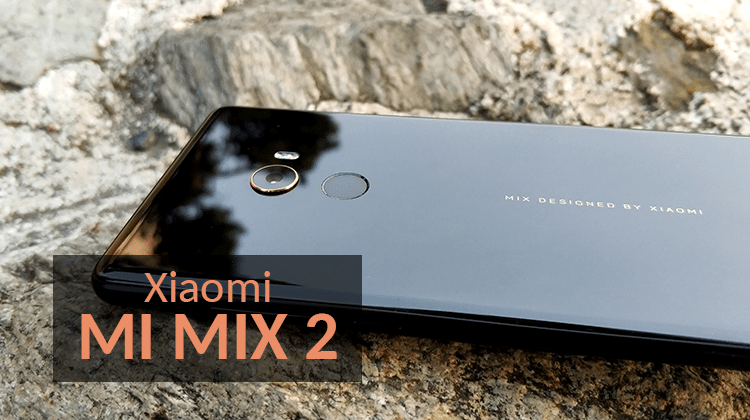 Xiaomi doesn’t need any special introduction since it is currently one of the most recognized Chinese smartphone manufacturers around the globe. The company’s products are known to be VFM for their price range, with high quality and excellent specs. The latest addition to the company’s flagships is Xiaomi Mi Mix 2, a 6’’ smartphone that manages to be small and lightweight, without sacrificing performance.

Mi Mix 2 was released almost half a year ago, back in September 2017. At first glance, the phone’s design is exquisite, and it has several differences regarding the previous 6.44’’. 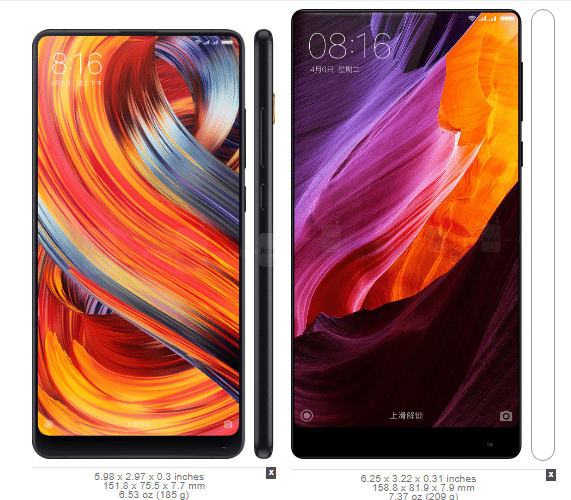 The most exciting part is that the phone's size is way smaller, but the company managed to fit a 6'' screen on dimensions that we find on 5.5'' phones.

Starting from the CPU, Mi Mix 2 is equipped with the best processor in the market at the time being, which is Qualcomm's Snapdragon 835, with Adreno 540 responsible for graphics.

Furthermore, it comes with Android Nougat 7.1, and Xiaomi's well-known MIUI 8 skin. We should mention that the skin is already upgraded to MIUI 9. 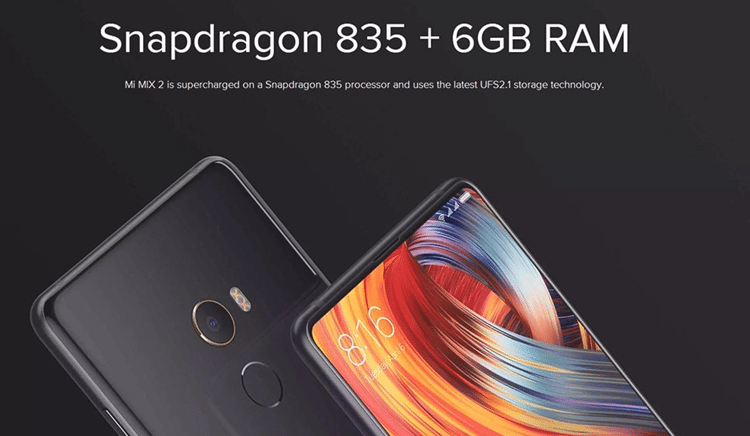 As for the cameras, the back sensor is a 12MP (f/2.0) with autofocus and dual-LED, specs that we'll find on most devices. However, it also has a 4-axis OIS system (Optical Image Stabilization) to eliminate shaking in photos and videos. 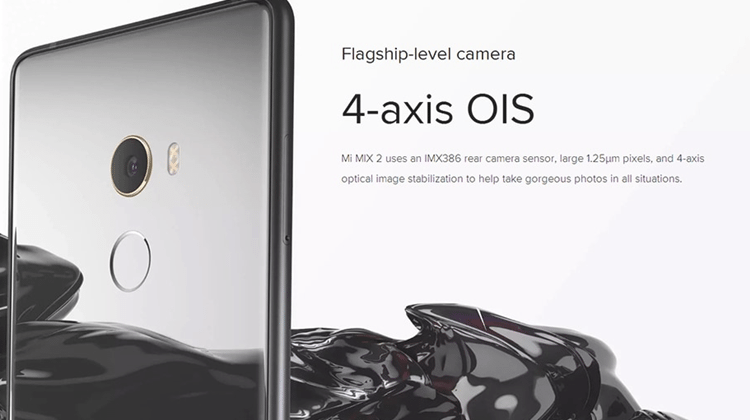 The front camera is at 5MP (f/2.0) with 1080p video recording capabilities. The interesting part is that the camera is placed at the bottom-right corner, instead of the top which we might be used to. 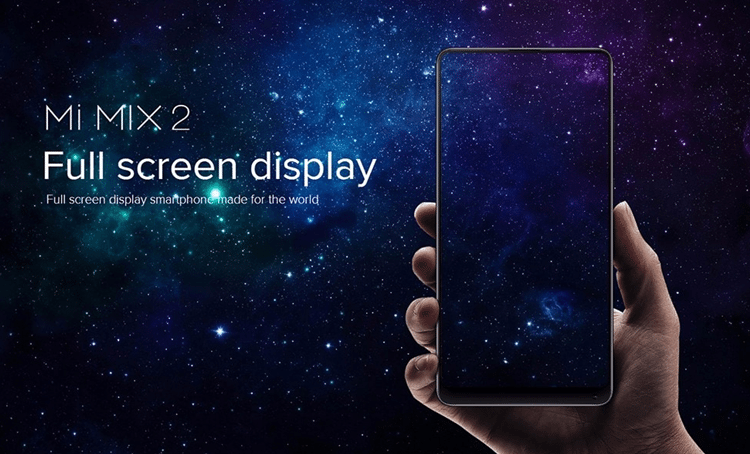 The phone comes with a ceramic and metal frame, although the special edition is all ceramic.

Regarding the price, we will find it at $630 from Gearbest with 6GB RAM and 256GB storage space.

We can also find other versions, and we can choose regarding our needs of storage space and Global or Chinese rom.

First of all, we would like to thank Gearbest for the sample we used in this review.

Mi Mix 2 managed to impress us, even by looking at the package. It resembles more to a chocolate box than a smartphone, to be honest. 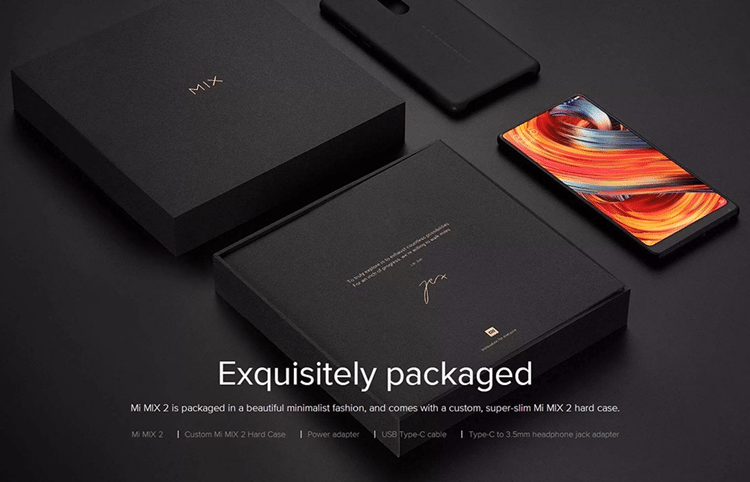 At the top, we found a signed cardboard-made plate in Chinese, and we admit we have no idea what it might say. Nevertheless, it adds an elegant touch to the whole package

Further below we fount the phone, which captures the eyes at first glance. 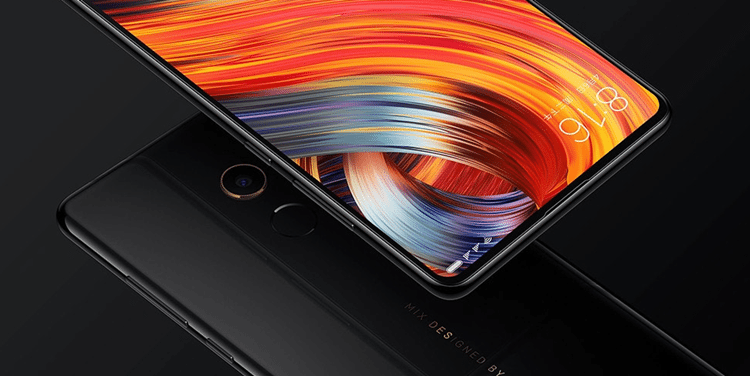 The only accessories in the package are the charger with the USB-C cable, a USB-C to audio jack adapter, the manual, the SIM needle, and a black case for the back.

We had no doubt that is one of the most premium devices we've held in our hands lately. Xiaomi paid a lot of attention to detail and managed to give the phone a high-quality stylish and minimal design. 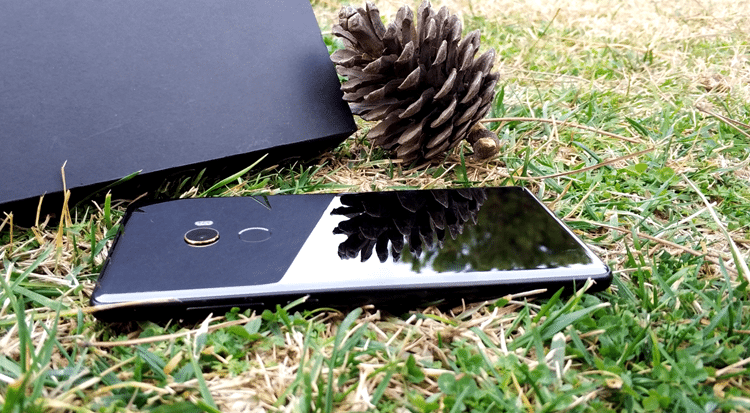 The display is the first thing we noticed once we booted the phone. The bezel-less design with the rounded edges is impressive. 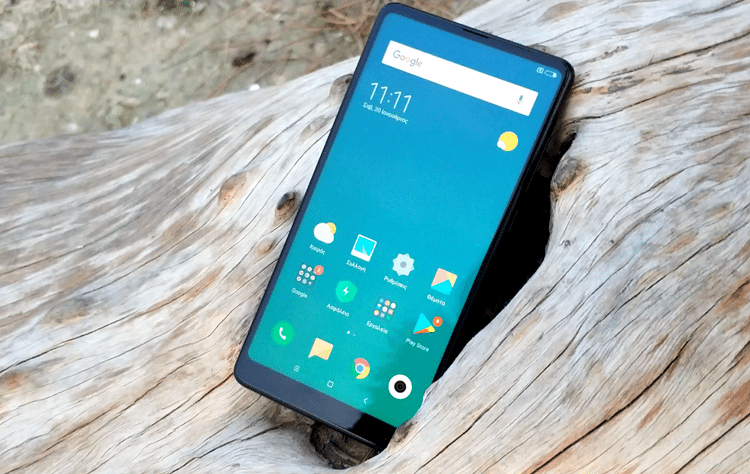 Once you hold it, you realize that it's a robust device on the high-end spectrum. The back side - which is ceramic - has the phrase “Mix designed by Xiaomi.”

On the first boot, we found out that our Mi Mix 2 sample had the Chinese ROM with Android 7.1.1 and MIUI 8. There was also an available update for MIUI 9. 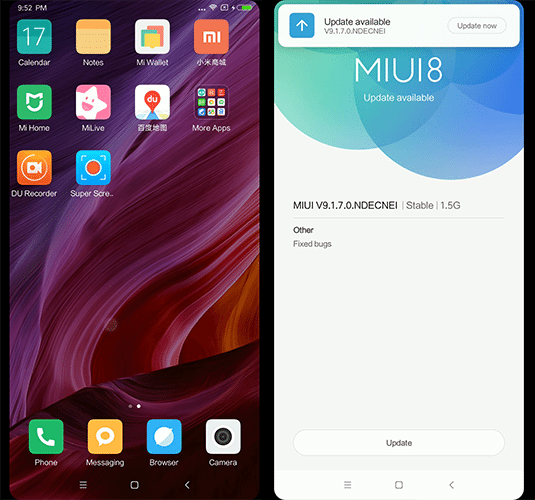 Our first move was to install the Global version we found on Xiaomi's website. Thus, we got rid of all the Chinese garbage apps, and we could access Play Store.

We used the Xiaomi Mi Mix 2 for one week, and our impressions were the best. The bezel-less screen made it very pleasant to use. It took us a few days to get used to the touch buttons at the bottom, but eventually, we made it.

The rear camera with the 4-axis OIS technology does a great job in both photos and videos. It has the Sony IMX386 sensor, the same that we will find on other Xiaomi devices, such as the Mi Note 3.

Outdoor photos were great, with plenty details and accurate colors. 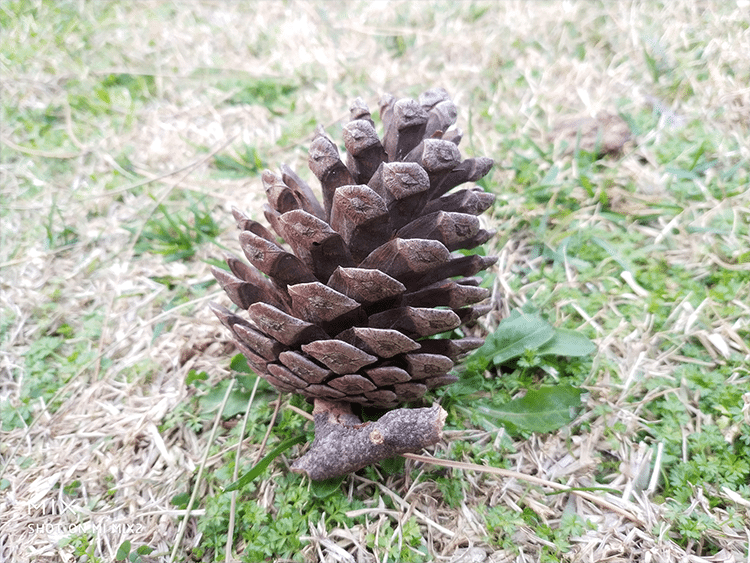 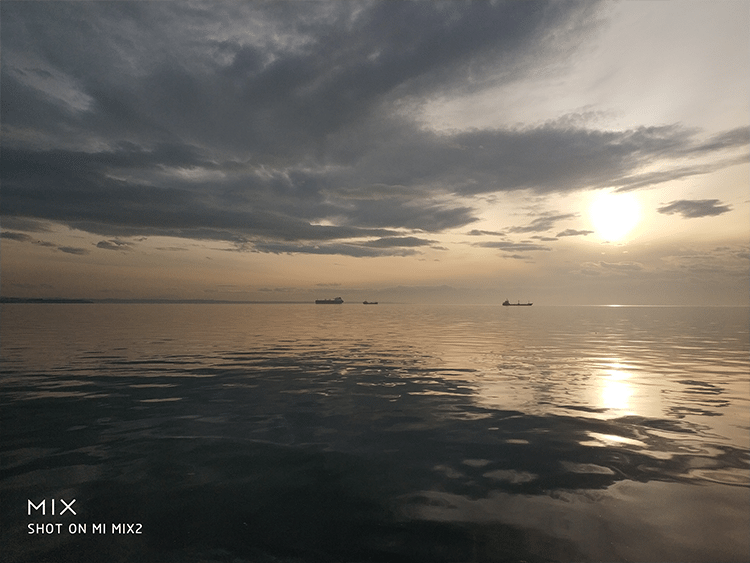 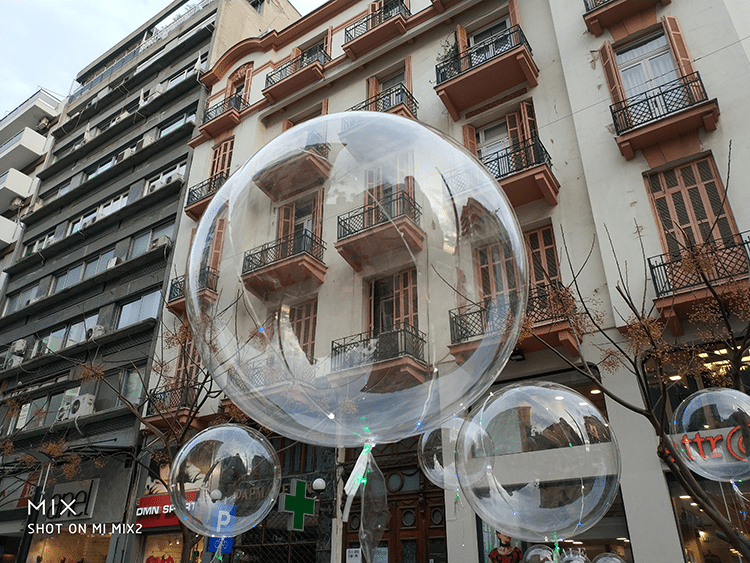 As you can see in the photos, the camera delivered excellent results.

In low-light situations, we notice a lower quality, a bit of noise, and less accurate colors. Of course, this is something we expected from the beginning. Xiaomi might do well on affordable, high-quality devices, but their cameras are never the best on the market.

If you want to see the photos in full resolution, follow the link.

The front camera has nothing special. It is an average selfie camera with adequate quality.

In the beginning, we might have some trouble to get used to its position at the bottom-right corner. After a couple of days, though, it didn't bother us any longer. It adds a stylish look that makes the phone special.

The image stabilization proved amazing, especially if our hand is rather stable.

Likewise, the 1080p version was good as well, but of course, there was a noticeable difference, compared to 4K.

Xiaomi Mi Mix 2 is equipped with only a 3400mAh battery, compared to the 4400mAh of its predecessor, Mi Mix. However, it managed to power the phone long enough, to suit our needs.

More specifically, it lasted about one day and a half on average usage, with a lot of browsing and phone calls. On more intensive tasks, such as gaming and video streaming, the battery's duration was almost a full day.

As for the performance, Mi Mix 2 lived up to our expectations. It didn't disappoint us on any task we assigned it. For as long as we tested it, we didn't notice any lag.

We run a set of benchmarks to measure its performance, and on the matrix below you can see the results. 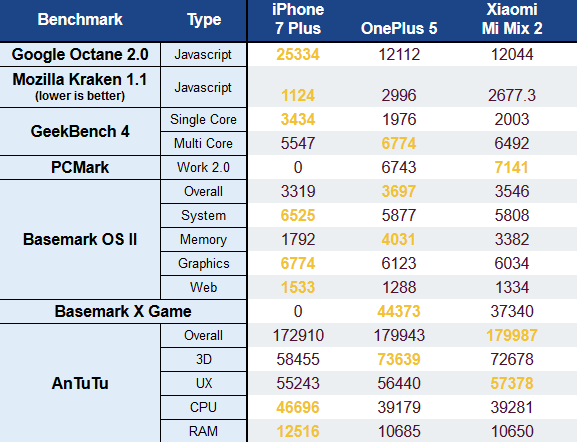 As we see, it is at the same level as the most recent OnePlus 5. On most of the benchmarks, it scored close to the iPhone 7 Plus as well, or even better.

Of course, when we put it next to iPhone X, Xiaomi Mi Mix 2 was left far behind on all the tests. However, this comparison is somewhat unfair, since the iPhone X costs more than double the price. 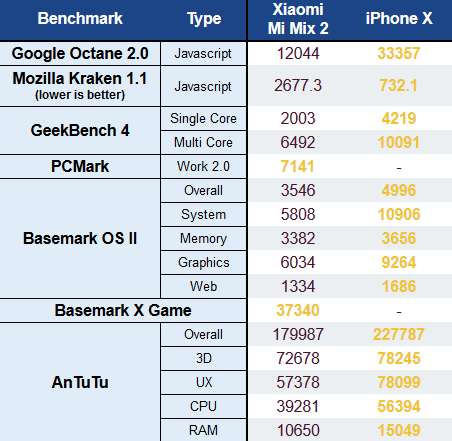 Let's also see a comparison with other Xiaomi devices we tested on previous reviews. 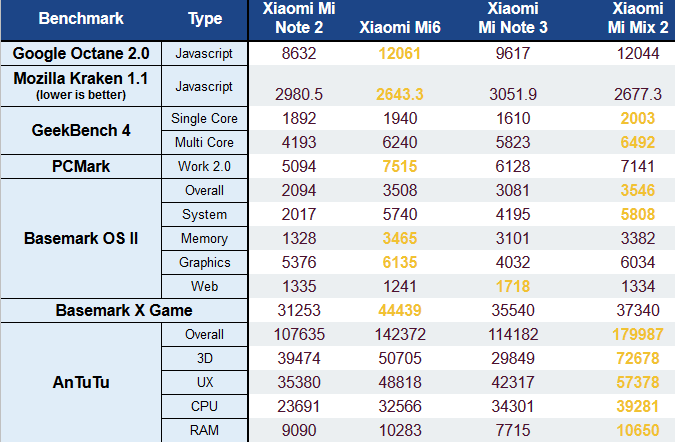 Xiaomi Mi Mix 2 is ahead in almost all tests. Mi6 is close and even ahead on some of them.

Mi Note 3 is more of a mid-range phone, but its results are not that far behind. The same goes for Mi Note 3 with the Snapdragon 821, which was Xiaomi's previous flagship.

Is it worth to buy?

Xiaomi Mi Mix 2 is a real flagship, and it is definitely worth the money. However, at the same price range, we will find other high-end devices as well, such as the OnePlus 5 and OnePlus 5T.

If you are interested in a bezel-less flagship smartphone with a unique design, then that's the phone for you.

We enjoyed every minute using it, and we struggled to find any disadvantages at all.

The new Mi Mix 2 is undoubtedly a device that will be at the top of the high-performance range for a long time.

If you have any questions about the smartphone, feel free to leave a comment below.

Previous Post: « What is Internet Addiction - Symptoms & Treatment
Next Post: How To Watch Series And Movies Online With New Kodi Add-Ons »