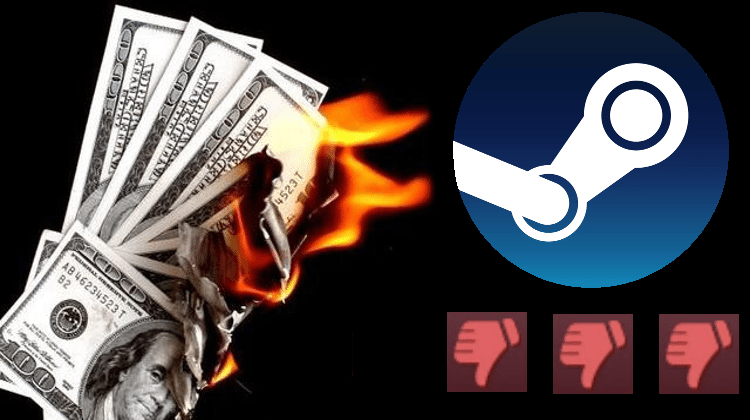 There was a time when Steam had high-standard games, and the developers had to present remarkable products. However, Valve has become quite lenient since 2012. The outcome? For every masterpiece, there are countless disappointing games, causing frustration to anyone who decides to buy them or wastes their time playing them. Let's discover the worst Steam games you should avoid if you value your money and time.

Valve's popular platform includes over 16,000 titles at its disposal. Naturally, there will be rubbish games among the good ones. However, some games are so awful, its hard to believe. Below, you will see some of the worst of them.

Apart from being one of the worst Steam games, we can also describe it as one of the most boring games of all time.

In GASP, we assume the role of an astronaut on the moon, whose goal is to find the rest of the spaceship crew. And at this point, the game essentially ends.

The gameplay involves a lot of walking... really... a lot of walking. So, there you go, you are constantly walking on the moon, avoiding asteroids as you go. It is literally a "walking simulator" without any other remarkable feature.

During our tour on the moon, our suit keeps losing oxygen. When we run out of oxygen, our character is supposed to die. Due to a bug of some kind, however, we keep on walking, because breathing is just so yesterday.

As if those problems weren't enough, the graphics of the game are reminiscent of a low-cost PlayStation 2 game. Furthermore, the lack of music makes the sound of the astronaut's breathing particularly annoying.

Incredibly dull and poorly designed, GASP has nothing remarkable to offer, and is definitely one of the worst Steam games on the platform. It is available for free, so it has that going for it, which is nice, but our time isn't free.

Who would want to play a game in which the player's decisions do not affect the course of the story in the slightest while listening to a 25-minute long monologue of a man with depression? Who wouldn't!

This is what Stout Games developers must have had in mind while making Dinner Date.

Dinner Date is an indie ''game,'' in which the role we assume is the subconscious of Mr. Julian Luxemburg. Julian has invited a lady over for dinner, and he is seated at the table waiting for her with anticipation.

The time passes, we keep checking the clock, and several thoughts cross Julian's mind as he is wondering what he is doing with his life. And so are we... What went wrong? How did we end up playing Dinner Date?

Our date never comes, after all. We smoke a cigarette by the window, drink all the wine by ourselves, and go out to find our friends. And the game ends.

There is literally no gameplay. All we do is select some hand movements that Julian performs. As we mentioned, none of the things we do can affect the story and progress of the game, which is enough to place it among the worst Steam games in the platform.

The worst bit? This particular game was nominated for an award (!) because of its innovative concept. At least it didn't win.

Day One: Garry's incident - not to be confused with the excellent Garry's Mod - is presented to us as an FPS survival game with crafting and puzzle elements.

The images of the game seem quite satisfactory, keeping in mind that the game was released in 2013 by an indie studio.

From the description on Steam, it gives the impression that it is an open-world game with an Indiana Jones vibe.

Since it is a survival game, we will need to procure our food by hunting wild animals. Perhaps we will even have to build a small shelter to protect ourselves from the elements.

It really sounds like a good idea, and it only costs 3.70$. How bad could it be? As it turns out, really, really bad.

For some reason, the crafting system manages to become the most annoying one we have ever come across. To produce and use even a plain bandage, we have to press four to five different keys, without a particular reason.

Also, in some cases, crafting is completely redundant. For example, the game gives us the skill to hunt several animals, and then cook their meat.

The only problem is that we can find fruit much more easily if we want to alleviate our hunger, without having to put ourselves in danger.

The puzzles are also annoying and fail to capture our interest. Most of them have no reason to exist in the game. In some cases, we have to wander through the whole jungle to find a single lever.

As for the combat gameplay, it would be hard to imagine a worse one. We start with only one knife, and within the first five minutes, we find a couple of revolvers and a sci-fi glove which casts some sort of energy waves.

Knife handling is reminiscent of a bad mobile game, in which we have to press the attack button as fast as we can.

Of course, let us not talk about mechanisms such as recoil or bullet drop. Even 90's shooting games had more realistic combat gameplay.

Apart from all these, the game had a plethora of bugs and glitches during its release. NPCs teleporting, others which do not respond when you attack them, and much more.

In time, the bugs were sorted out, but Garry's Incident does remain one of the worst Steam games. Luckily for us, the developer decided to take the game down, so no other Steam user will suffer its awfulness.

Indie games and postmodern abstract ideas are all very well in their way. But games such as The Graveyard make us believe that sometimes, using the label ''alternative'' is only a fraud that some companies use to make money.

Therefore, ''The Graveyard'' is a game where we assume the role of an old lady. We are in a graveyard, and we walk with difficulty until we reach a bench.

Then, we sit on the bench, listen to a German song talking about death, and we... die. Yes, this was the whole game, for which we paid 6$.

What's impressive about this game is that it managed to get 53% of positive reviews on Steam. Still, spending 6$ for a video that lasts about 7 minutes is highway robbery, plain and simple.

What would we get if we combined elements from the classic game ''Asteroids'' with passages of the Bible? But of course, Uriel's Chasm.

No, we are not joking. Uriel's Chasm is a horrible version of a side scroller game, which, for some reason, involves a lady reading passages from the Bible. At the same time.

If this grotesque idea has not convinced you of how bad this particular game is, we can go on.

Indescribable graphics and colors, flashes which could cause an epileptic seizure, and cutscenes of two girls speaking to a webcam.

We don't know what the game designers were trying to achieve by making Uriel's Chasm. If they were indeed trying to design one of the worst Steam games, they have succeeded triumphantly.

According to its designer, The Rebel is a game with which we can 'entertain ourselves and enjoy beautiful graphics.' Unfortunately, this statement is not remotely true.

Starting the game, we are in the woods somewhere, and for some reason, we are being chased by a dinosaur.

We can shoot it but to no avail, because the dinosaur is immortal. Also, we cannot die, no matter how many times it strikes us.

In the next level, we are in a building, and we have to face some invisible people. The thing is, the game is unresponsive or has latency so often that it is almost impossible to aim.

No matter how much we have searched, no other element of this game would leave us with a positive impression. All aspects of its design are horrendous. Curious flashes which are probably a result of lousy rendering don't do it any favors either.

And to make matters worse, the designer of the game says that ''even if the game is a failure, I hope to make some money to buy beer''. Well, there's a good reason it is on our list of the worst Steam games.

Which Steam games do you consider the absolute worst?

Do you agree with our list? If you have played any of the games we mentioned, or if there is another one that you would like to add, let us know of your unfortunate experience in the comments below.

Previous Post: « How To Get Your Android Notifications On Your PC
Next Post: How To Get The Most Of Windows OneNote »