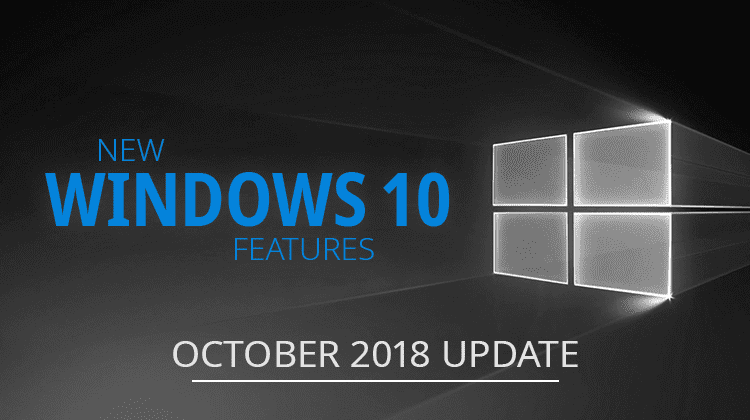 After numerous problems and delays, Microsoft finally released the so-called "October 2018 update" on November 13th. The new Windows 10 Update offers various improvements, features, and tools over the previous version of Windows 10. At the same time, the company has updated their Windows 10 support policy, based on the version we have installed on our computer.

All Valid Methods to Upgrade to Windows 10 for Free

Before Windows 10, Microsoft was supporting each of their operating systems for a certain amount of time.

After Windows 10, the company announced it would not release other operating systems in the future. Windows 10 may change appearance and get new features as the years go by, but the name will remain the same.

However, that doesn't mean that all Windows 10 versions will get unlimited support. Microsoft will release feature updates twice a year, targeting March and September annually.

The updates are cumulative, which means that each update will pack all the previous features. 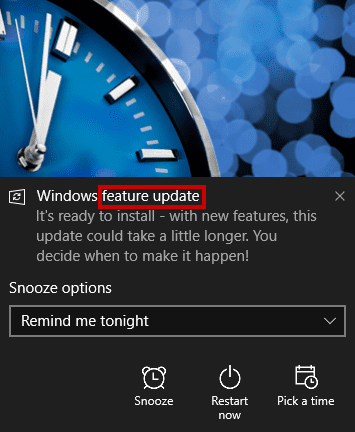 Up until now, each feature update was getting support for 18-month.

This won't affect most home users, which will have the latest feature update before the current versions expire. 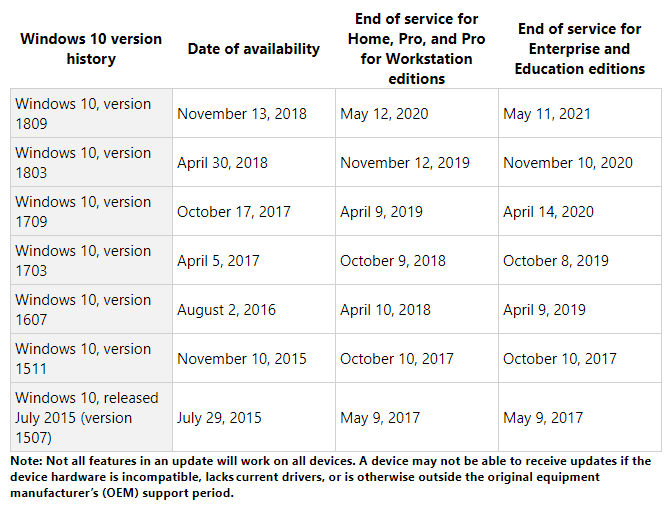 For more information, you can read the Windows lifecycle fact sheet.

Windows 10 1809 - known as the October 2018 Update - was officially released in November. Why is it called "October Update" then? Because it wasn't the first time we saw it on our computers. 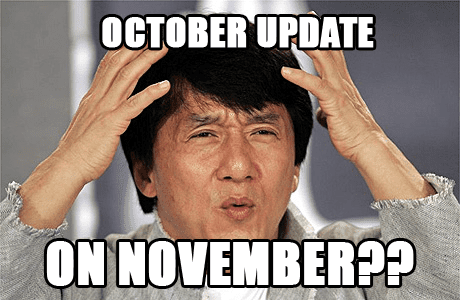 Allow us to explain.

In early October, Microsoft made available for the public the October 2018 Update. However, some of those that installed the update faced some serious problems.

The users reported driver issues in the new Windows 10 update, while others lost valuable files, such as documents, photos, videos, and other personal folders.

As a result, the company withdrew the October 2018 Update to investigate the problem.

A month later, on November 13th, Microsoft fixed all the issues, and the October 2018 Update became available again for download.

If our computer supports the new Windows 10 update, and if there's no compatibility issue with our software, Windows Update will eventually download and install the latest version.

However, if you are eager to try the October 2018 Update, you can manually install the new Windows 10 update following our guide.

To check the version you currently run on your computer, go to Start > Settings > System > About. 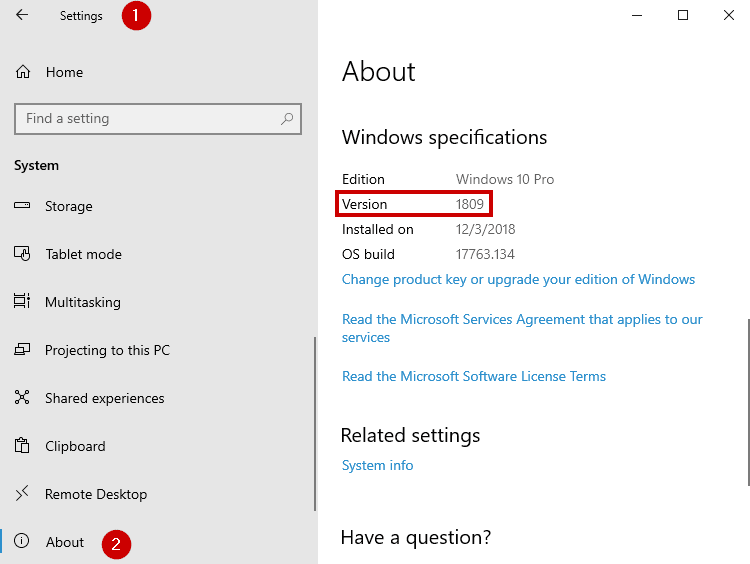 We downloaded and installed the 1809 version from the first day - of its second release - and we checked out all the new features. Here's what you should expect from the new Windows 10 update.

In a previous upgrade, Microsoft had incorporated a dark mode into the UI. That mode has finally made it into Windows Explorer. 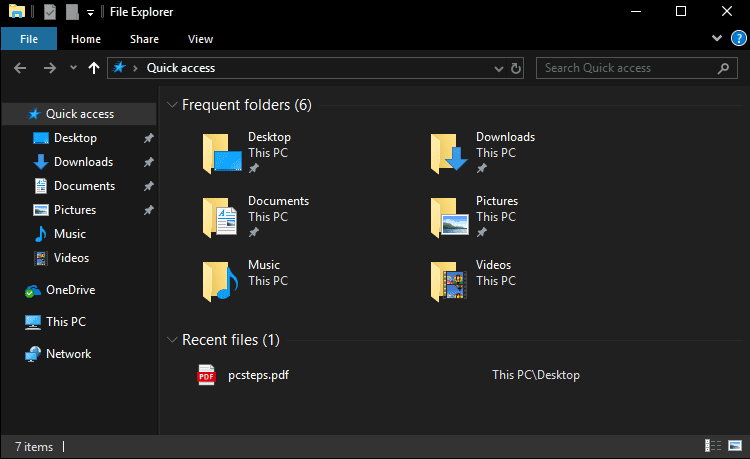 To activate the dark theme, we go to Settings > Personalization > Colors > Dark.

As for functionality, we now have access to the content of our clipboard, without the need of third-party apps. We can access the clipboard by pressing the WIN + V key combination. 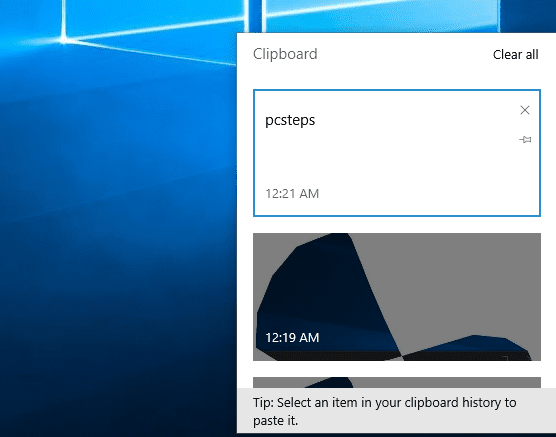 Furthermore, if we connect with a Microsoft account, we can sync the clipboard to the cloud, and have it available in all our Windows devices.

This feature is especially useful if we use two or more computers. For instance, we can copy a link from our desktop computer, and paste it later on our laptop.

Another feature we welcomed with enthusiasm is the new Search. In the new Windows 10 update, we can search based on categories, such as apps, files, settings, images, and so much more.

At the same time, Microsoft allows us to search the web from our search bar. That way, we can even get a download link for programs we might want to install, without the need to open our browser. 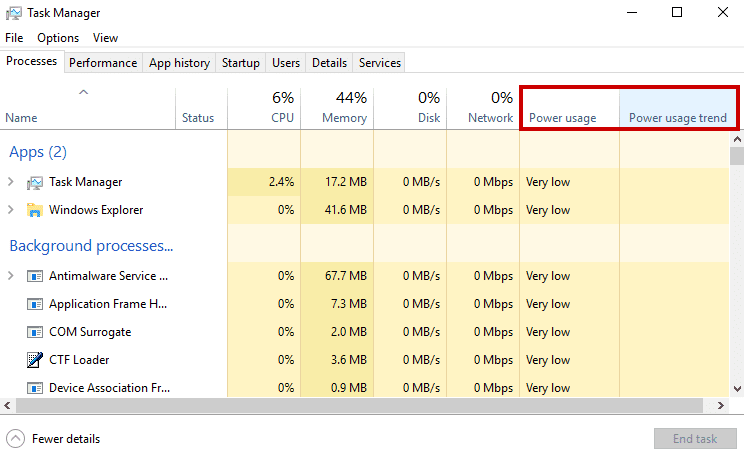 These columns show us which applications are the most power-demanding. We can't see how this kind of measurement could be useful, though.

Until now, if we wanted to grab a screenshot on Windows, we could use the Snipping Tool or third-party software.

The company will slowly replace the Snipping Tool with a new app, known as Snip & Snatch. Microsoft needs to do something about those names, but other than that, the tool is a pretty neat upgrade. 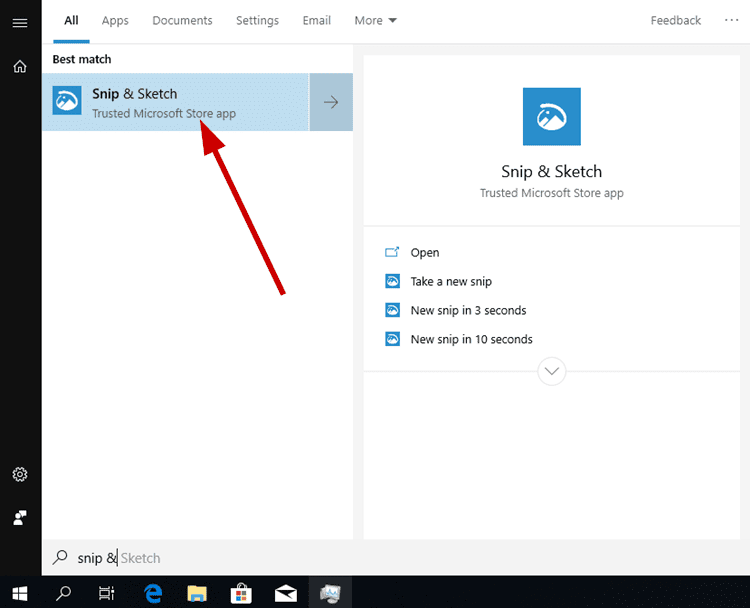 With the WIN + SHIFT + S key combination, the tool will give us three options at the top of our desktop:

After taking a snapshot, it is automatically copied to the clipboard. We can paste it wherever we want with CTRL + V, or right-click and paste.

However, we can also click on the message at the bottom right corner. 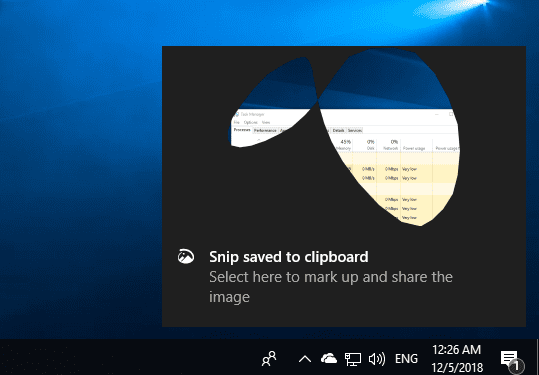 This way, we open the Snip & Sketch tool that will allow us to edit our screenshot. We can also set the tool to open automatically with the Print Screen button. 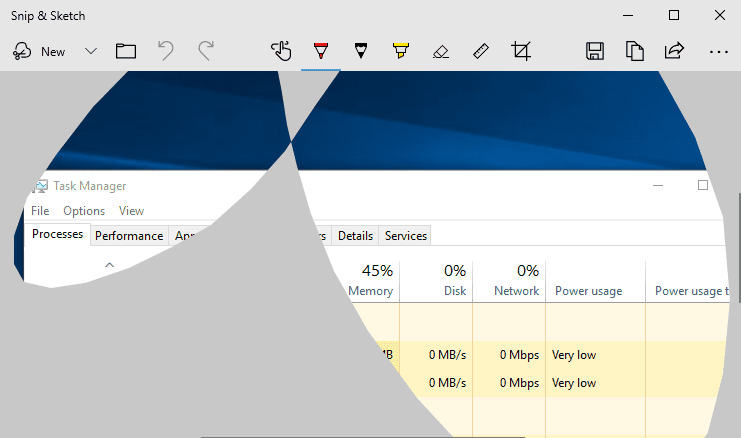 The app has a very modern design and plenty of tools to get us started. We will find a timed snapshot option at the top left. Also, we can crop our image, use a ruler, or sketch on the screenshot with any color and size. 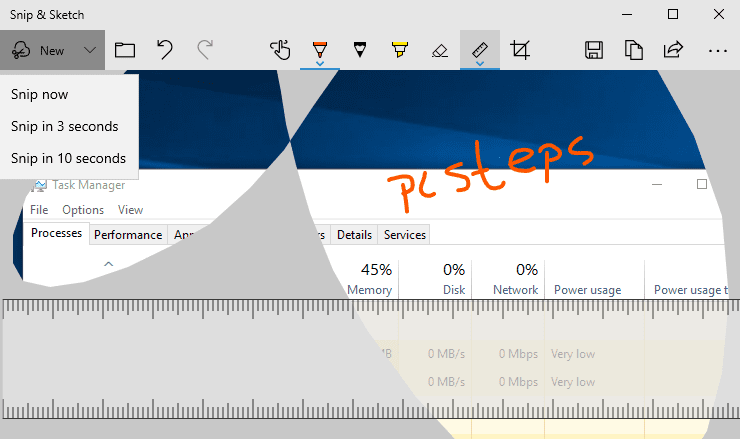 We believe that Snip & Sketch is an excellent addition to Windows 10, and it will be beneficial to the average user. Although, it is still missing some other tools that we would like to see, such as adding a text layer and shapes.

One of the most highly anticipated additions to the new Windows 10 update is the "Your Phone" app. 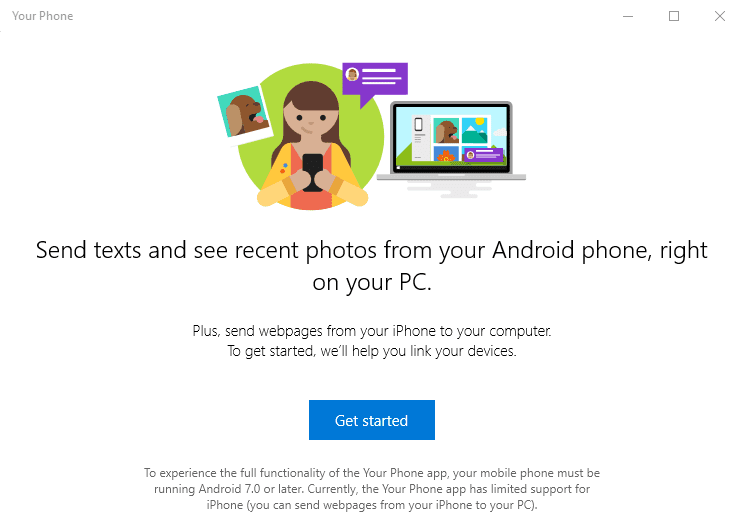 The app allows us to sync our phone's data on our PC. We can see our photos, notifications, and SMS on our computer screen. 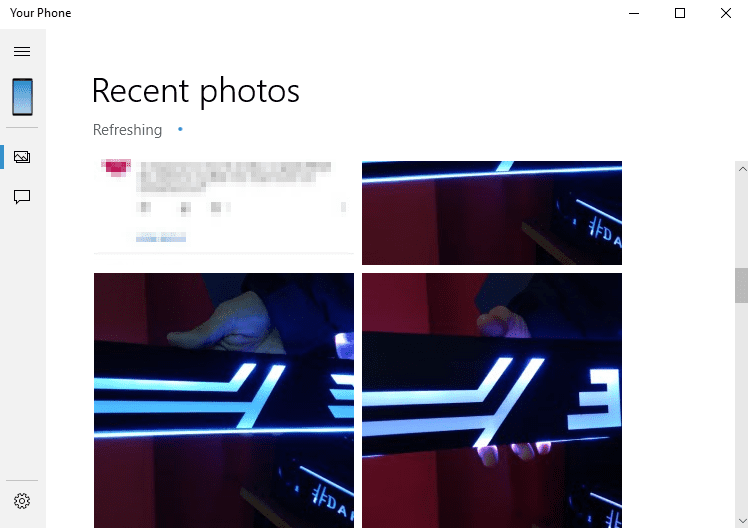 To use it, we need to have a device running Android 7.0 or higher. Support on iPhone devices is still quite limited.

On the left sidebar, we will see all the photos we have taken with our phone, as well as any SMS we may have. 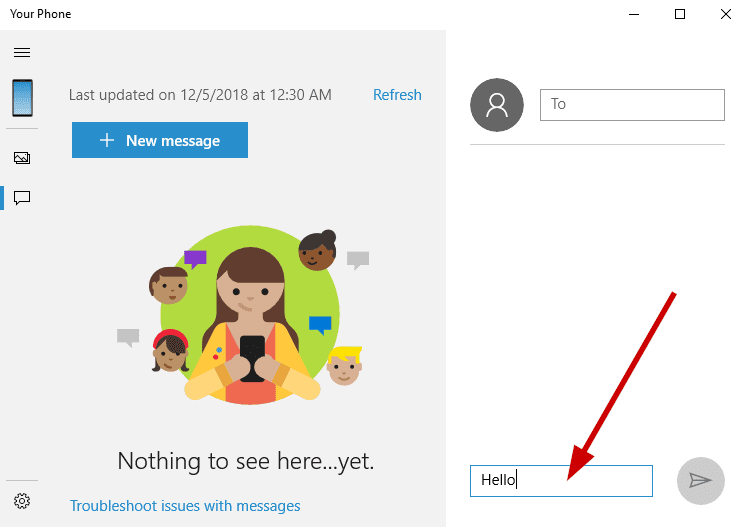 In fact, we can respond to messages from the app's interface, using our computer.

Although the idea seems promising, it still lacks some important features. We can't justify using the apps just for SMS and photos since numerous third-party apps allow a better synchronization.

How To Get Your Android Notifications On Your PC

Since Microsoft decided to change the look on Skype, more and more users are abandoning the platform, seeking alternatives.

In an attempt to keep the users in the app, the company changed the interface once again, adding extra features in the process. 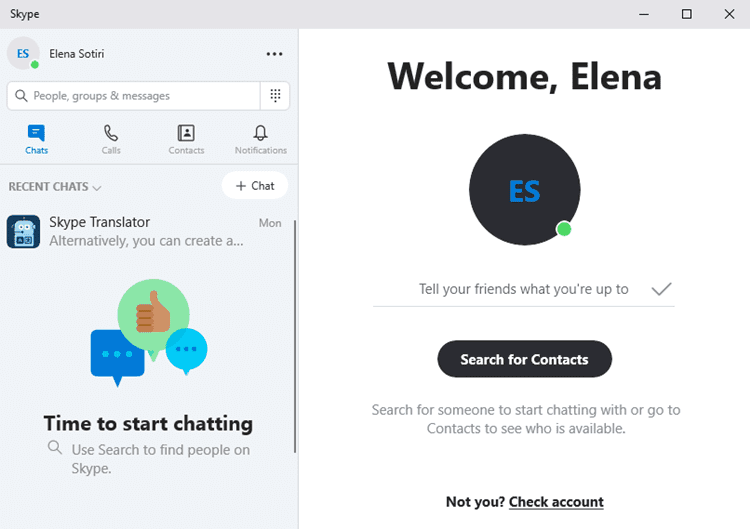 Among the new features, we have distinguished the ability to record calls and use the "Add-ins" from the "+" symbol at the bottom right. 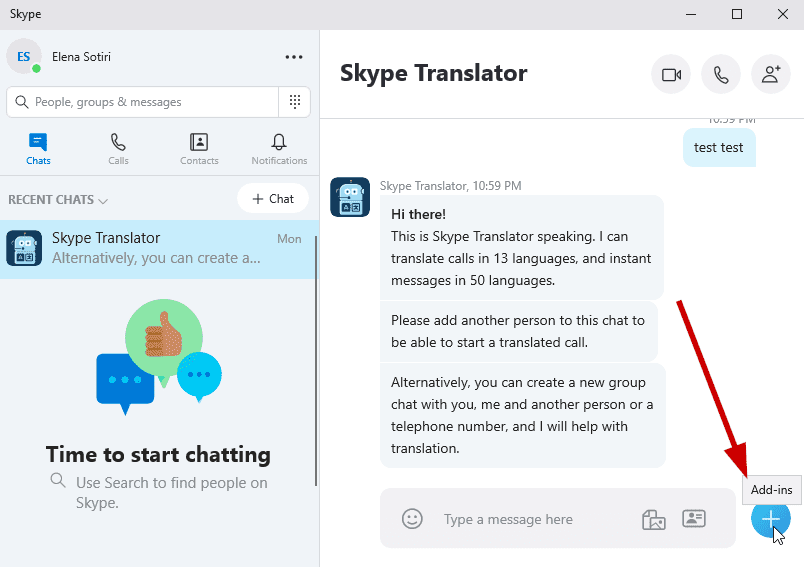 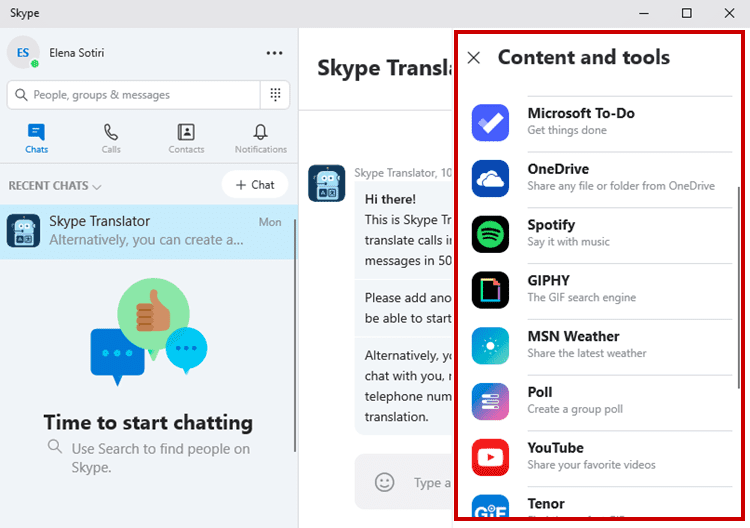 We had given up on Skype, but this time we truly believe it might be worth another chance.

If you are still looking for Skype alternatives, though, check out our guide:

Tired of Skype? These Are The Best Skype Alternatives

Microsoft is slowly moving the old Control Panel into Settings. In the new Windows 10 update, we get to access the Advanced Sound Options through Settings > System > Sound. 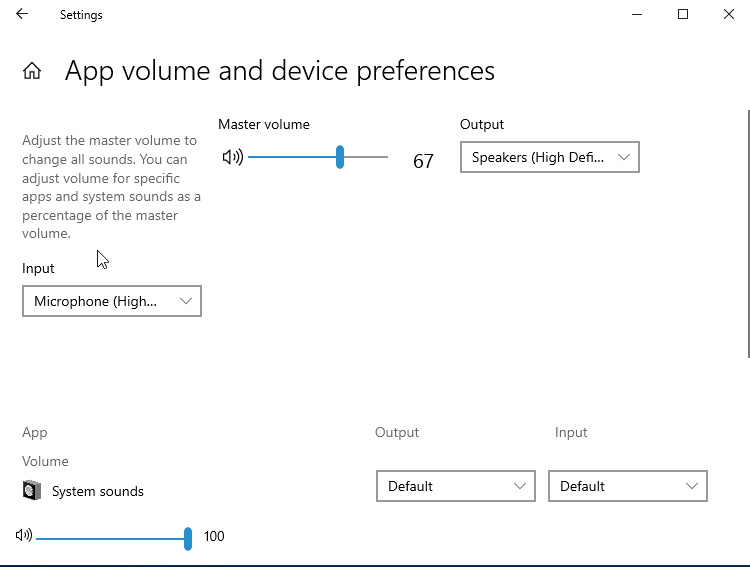 At the same time, we will be able to see frequently asked questions and responses. On the home page of Settings, there will also be some tips and tricks that may come in handy.

In Date and Time settings, we can now override our local settings and change the calendar, the first day of the week, the date and time formats, currency, etc. 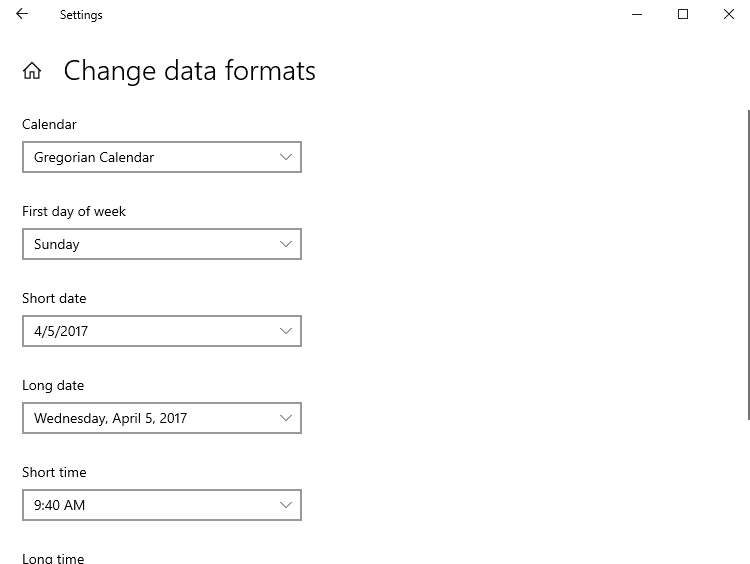 On the Display tab, we'll find the new Windows HD Color settings. From there, we can select the HDR settings if we have a display that supports that kind of content. 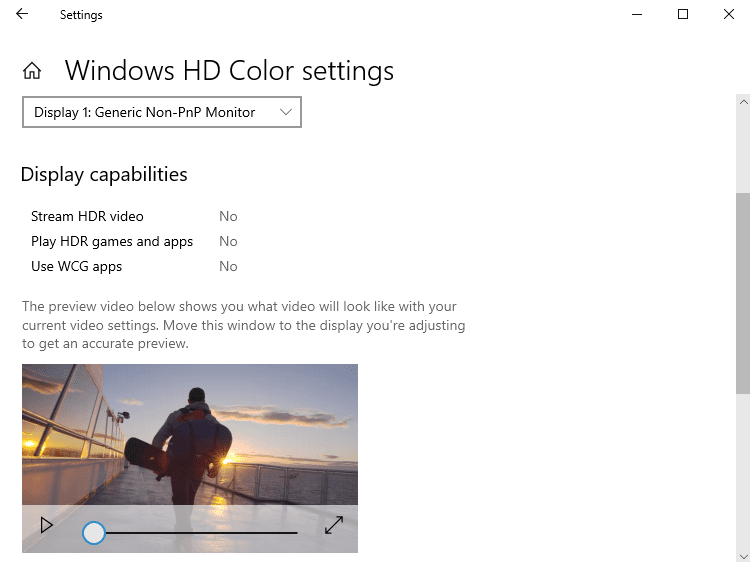 Finally, Windows Update has new built-in machine learning capabilities that allow it to "decide" whether to install an update or not.

The Game Bar was re-designed in the new Windows 10 update... 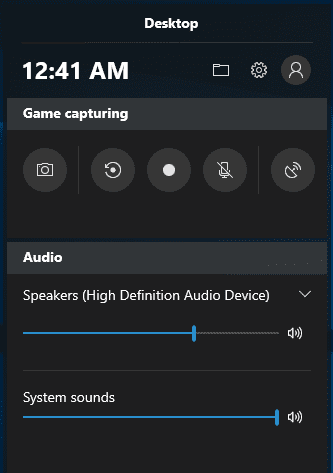 ...and it is now accessible through the Start menu. 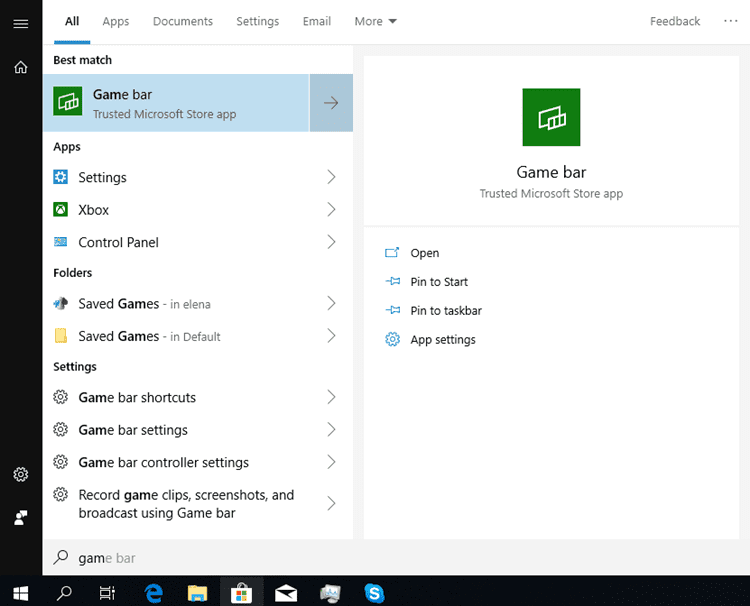 The best part, however, is the performance feedback we get while gaming. The Game Bar can show us CPU, GPU, and RAM usage, as well as count the in-game FPS. Thus, we don't need to depend on third-parties to measure these metrics.

Edge received several improvements as well, and it is getting better and better with every new Windows 10 update. 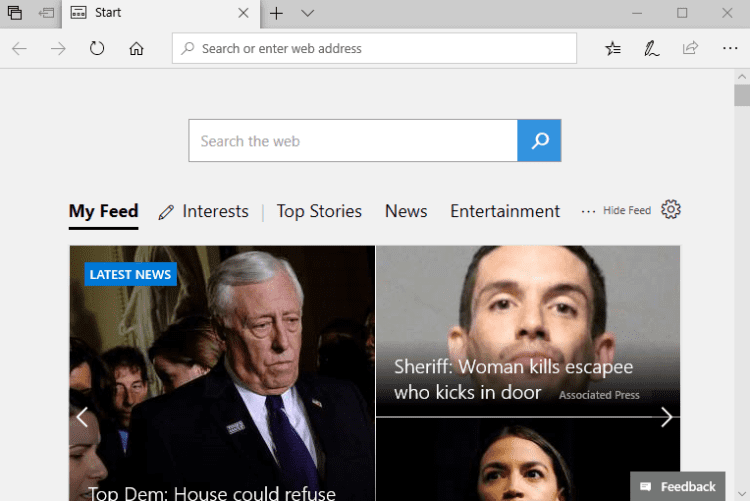 Beyond some minor appearance changes, such as shadows behind tabs, icons in the Settings menu, and themes in Reading View... 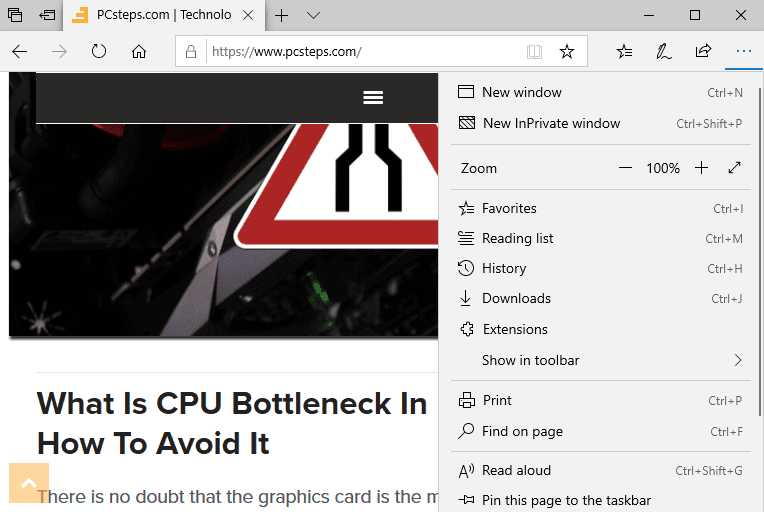 ...we can now tweak some other important settings. For example, we can decide if we want videos to play automatically or not. The browser will also ask to store our transaction details.

Edge's PDF reader is more robust than ever and allows to add notes, look for word definitions, and more. All PDFs we open on the browser will appear in History. 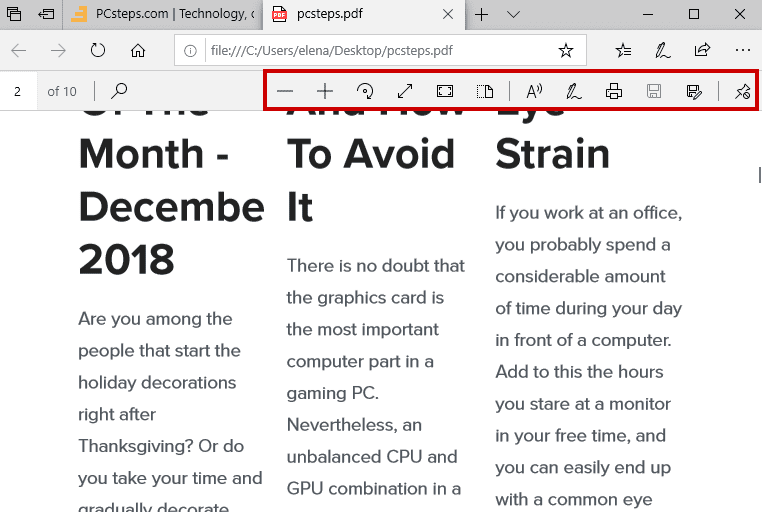 If we try to print a PDF file through the browser, we can choose the size of our print.

Finally, on Edge's menu we can see the top pages we visit.

We have to admit that Edge has nothing to do with the old Internet Explorer we all love to hate. It appears to be the fastest browser for Windows 10, but besides that, the company is continuously improving it with new features.

We will even dare to say that Edge is finally a valid alternative to the most popular browsers, like Chrome and Firefox.

However, don't be too hasty to switch to Edge. There is a rumor lately that Microsoft will replace it with a new Chromium-based browser. Then, why so many improvements, you ask?

With the News app in the new Windows 10 update, Microsoft wants to help the users gather all their feeds in one place. 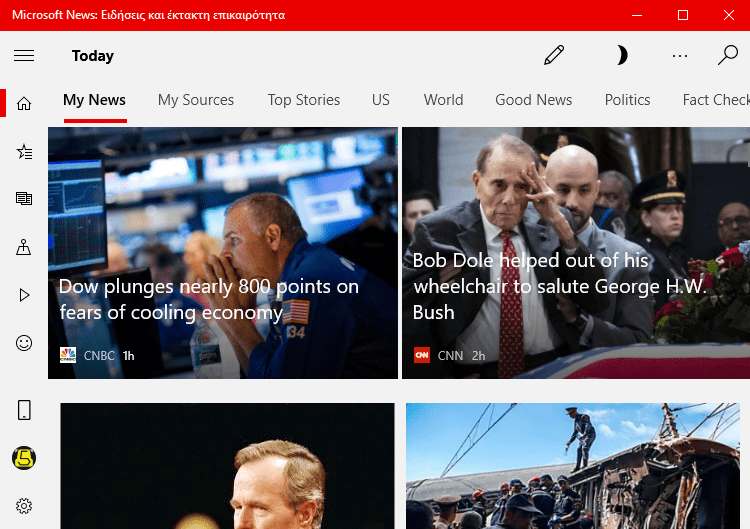 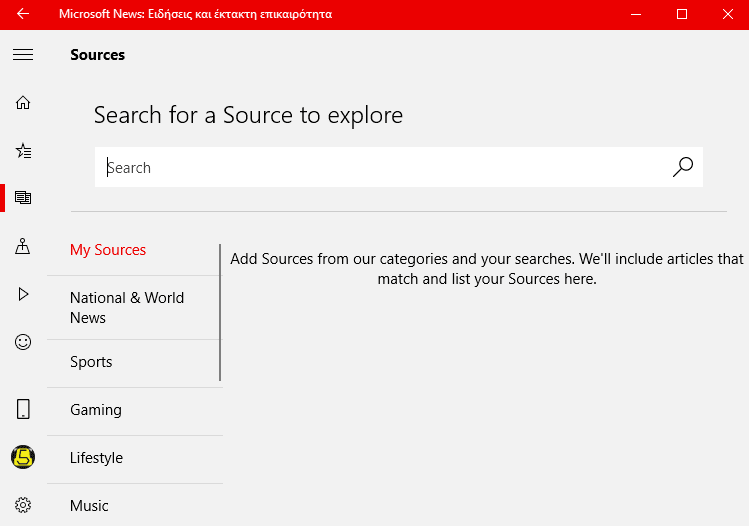 The application is pretty easy to use, but during our tests, we found it extremely limited in features. First and foremost, there is no option to add our preferred sources, other than the default ones. Although promising, we think that the application is still in an early stage.

So far, we've seen the most significant changes in the new Windows 10 update. However, there are other minor fixes that we may not notice, but they will make our lives much more comfortable. 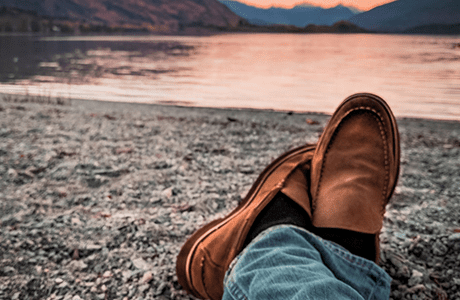 Did you install the October 2018 Update?

Version 1809 is finally out, bringing all these new features. Although it is not a major upgrade, there are still some essential tools that are worth updating.

How about you? Did you install the new Windows update? Feel free to leave your comments below.