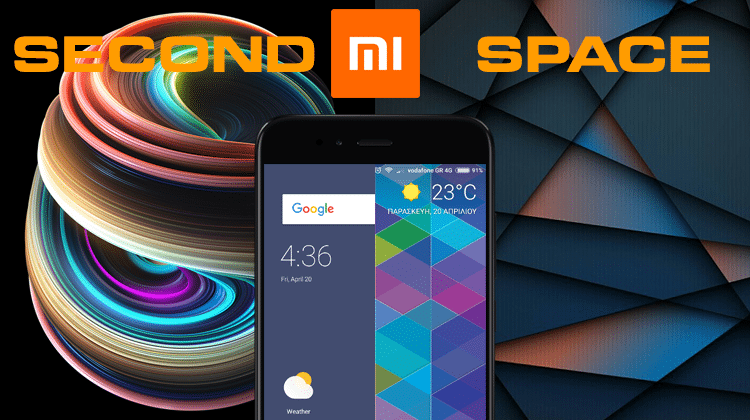 On Windows, we have the ability to create as many user accounts as we want. Each user can have a personalized experience. For example, they can independently choose how Windows look, and much more. On an earlier guide, we saw that we can have a second android user account on the same device. For this purpose, Xiaomi created Xiaomi Second space, which has remarkable features.


What is Xiaomi Second space

Xiaomi launched Xiaomi Second space with MIUI 7. Its original name was Child Mode, and it was a setting that allowed the main user to select which apps would be accessible to other users.

It's not that impressive, and it's easy to understand that this is not a second Android user account. 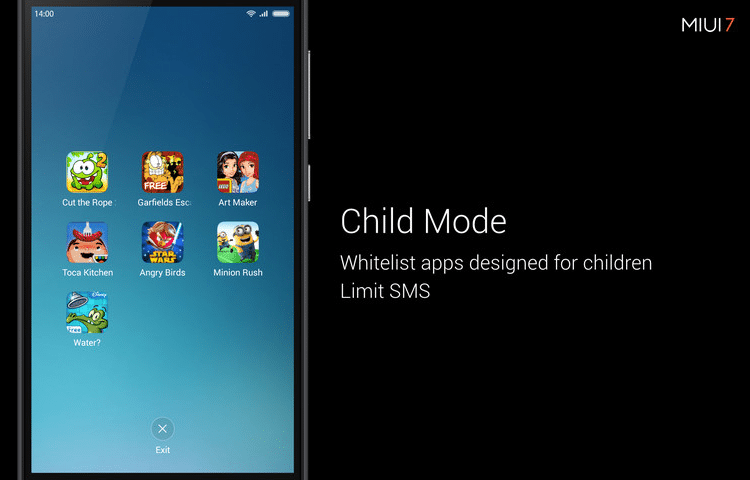 Now, as the phone's owner, we can create a new extra "account." This second Android user account has a separate home screen, new folders, and its separate apps.

Our device already has a user account that uses the storage space, and generally the smartphone. The problem here is that everything is available to everyone unless we use independent apps.

But if we create a second Android user account with Xiaomi Second space, then we can choose what others will see. We can even turn off the notification so they won't even know about Second space.

To use Second space, we open our phone's settings, and we find "Second space." 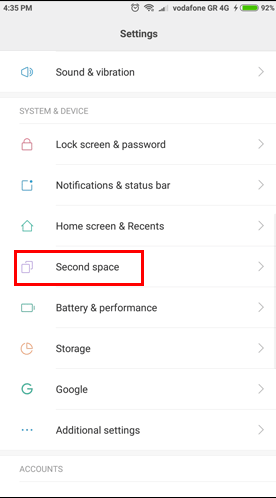 We immediately see the introductory screen that informs us of the advantages of Second space, so we tap on "Turn on Second space." 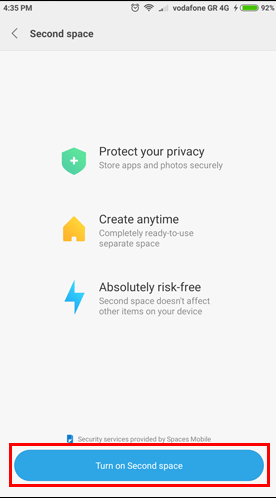 Shortly after, we will see that we have successfully created the Second space, and then we select "Continue." 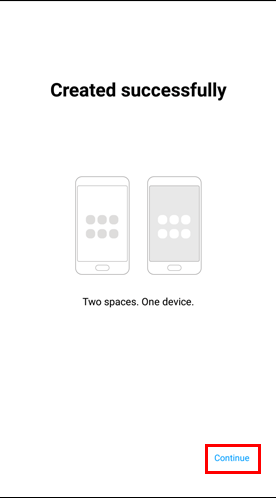 At this point, we get an option of how we want to access Xiaomi Second space. We select "Using a password" and press on "Continue." 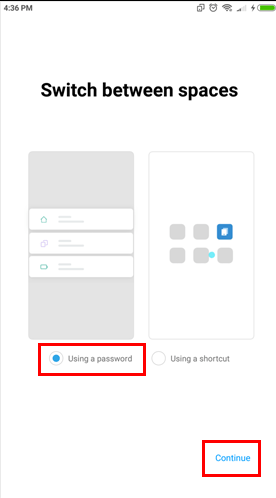 Next, we need to set the passwords for the first and second space. So, we tap on "Set now." 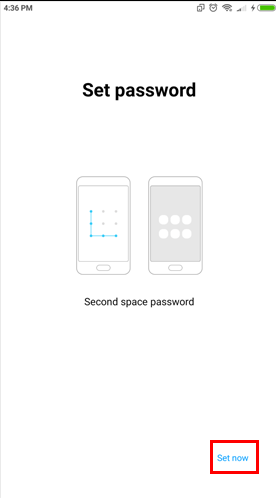 First, we enter the code for the first space, then the one for the second Android user account.

Afterward, if we want, we can secure the Xiaomi Second space with our fingerprint. This setting is available only if our device has this sensor.

So we either press "Skip" or "Set now" if we want to secure the second space with our fingerprint. 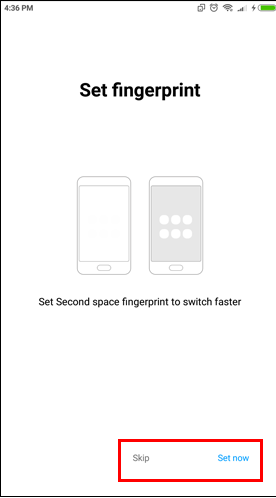 We are now ready. We now have our primary account, and we have also created the second Android user account. So let's see how to use Xiaomi Second space.

After locking our device, an attempt to unlock it will cause a PIN code prompt to show up. Depending on the code we enter, we will access the corresponding account.

In addition to the lock screen, we can also enter the second account through the phone's settings.

We go to settings, select "Second space," and choose "Go to Second space." 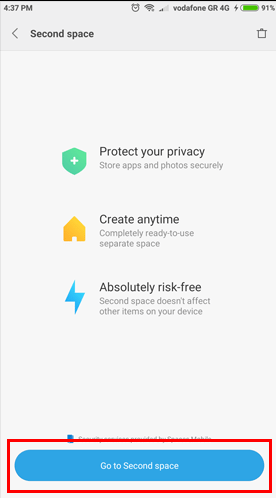 It asks us to enter the PIN of the second Android user account, and after we do, we will immediately gain access to it.

Meanwhile, Xiaomi Second Space has created a shortcut for the second account.

As we can see, there are several ways to switch between our two accounts. Also, each account has its space, its folders, separate settings, and its applications.

Even Google accounts may be separate. We don't share anything in these two spaces.

So, we do not have to be afraid of prying eyes, but it's also an excellent parental control solution. 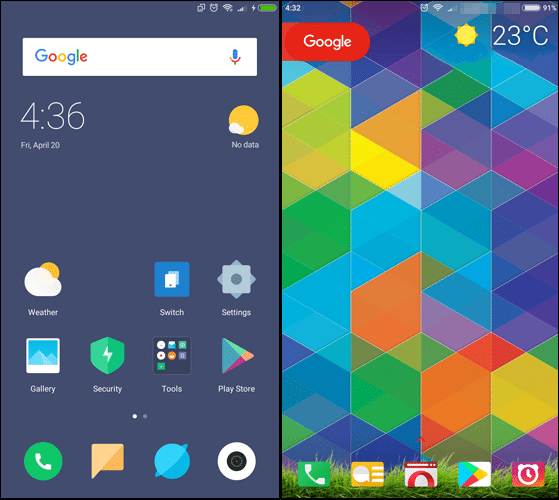 From now on, when someone asks us for our password, whether it is a friend or our child, we can give them the code for the Second space. And believe us, they will have no idea about what is going on.

The time has come to check the settings of the Second space, and to make some improvements.

By logging in to the second account, we go to the settings, and choose "Second space."

Here we can see the available options, which begin with the essential security settings. 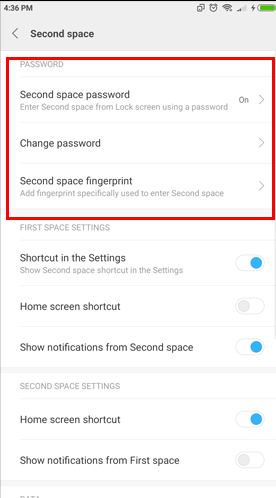 Then we have the settings for the first and second space.

In the "FIRST SPACE SETTINGS," we can leave everything as is. After all, it's our primary account.

Meanwhile, we don't have to have a shortcut on the home screen. If someone finds a way to get into our primary account, we would not want them to know that there is a second Android user account.

So, we go to "SECOND SPACE SETTINGS," where we disable both options.

We already mentioned several times that we shouldn't have the shortcut anywhere. Also, it makes sense for the second account not to receive the first's notifications. 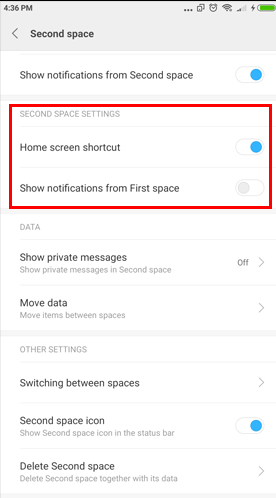 Next, we will find the "DATA" settings.

We leave "Show private messages" as is and we open "Move data."

A prompt will show up asking the first account's code, so we enter our credentials to gain access.

At this point, we have a series of interesting choices. We can transfer app data, files, and even contacts, from one space to another.

Although, in all honesty, we can't see a good reason to do so, as the entire point of doing this is protecting our data.

However, if anyone wants to, they can freely share anything they wish with others. 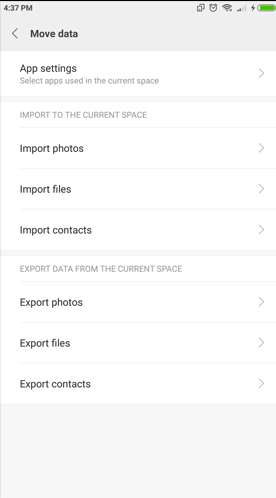 The last settings are about some unique features. 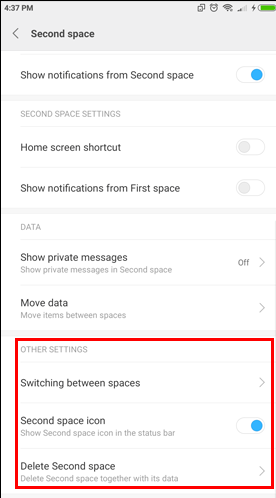 The second is about the Xiaomi Second space icon in the notification bar. What, have you not noticed yet? 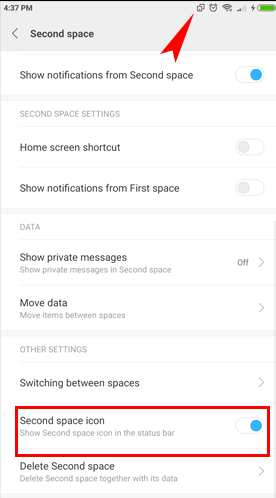 As we have already said, no one should know about the second Android user account on our phone. So we disable the setting, and the icon disappears.

The last option allows us to delete the Xiaomi Second space.

Whether we no longer want it, or we do not see the point of having the second space, or just because we created it out of curiosity, we can go here and click on "Delete Second space."

We immediately see a warning which lets us know that we will lose the contents of the second Android user account. We click on "Continue" to delete the second space. 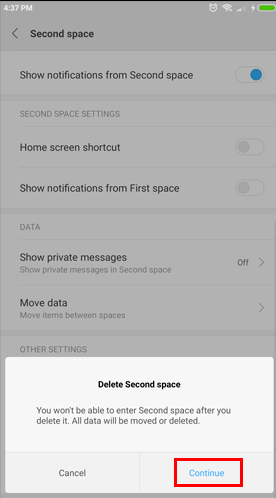 Deleting the second space through its settings is not exactly definitive. In fact, maybe only Xiaomi knows what's going on.

As we found out, all the data in the second account is kept as copies in our mobile storage. At the same time, there are backups in MiCloud, if we have set it up.

To permanently delete the Xiaomi Second space, we will have to do so from the primary account. So, we go to settings and press "Second space."

At the top right, we will notice that there is a trash can icon. Once we click on it, we will see a notification warning us as to whether our decision is final or not. We select "Delete."

Before going through with this, we need to understand that this is an irreversible action, and all of the data in question will be permanently deleted and rendered unrecoverable. So we need to enter our MiAccount code before proceeding.

That was all you need to know about Xiaomi Second space and its amazing features. We are confident that we can use it as the perfect parental control method.

Read about internet security and parental control on a computer, browser, phone, and tablet.

Android Parental Control For Our Kids' SmartPhones And Tablets

A second Android user account can prove to be particularly useful, especially if we have kids. Google took the first step with the multi-user feature on its operating system.

Do you own a Xiaomi device? Do you use Xiaomi Second space? If so, how useful is it? Let us know in the comments below.