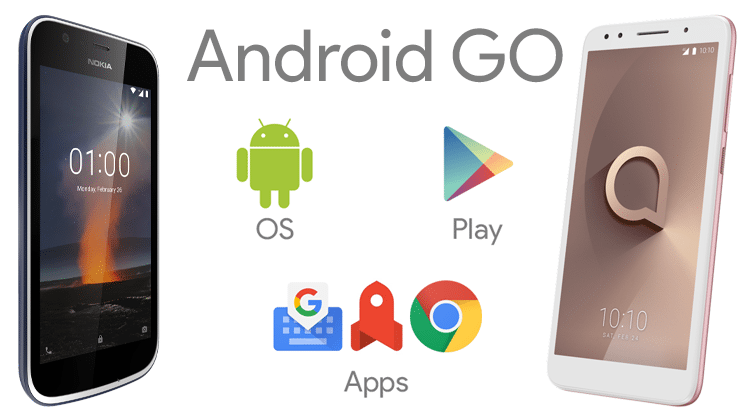 The variety of Android-powered smartphones is undoubtedly impressive. We can find the popular operating system in budget devices ranging from $50 up to flagship phones of $1000+. But it isn't a secret that the most affordable smartphones will struggle, especially when they have low RAM or limited storage space. Thankfully, Google has created Android Go, a lightweight version of its operating system for budget devices.

What is Android Go

Also known as Android Oreo (Go Edition), this is a light version of Android, designed to run on low-performance devices.

However, Android Go isn't just an operating system, but it is also a pack of three enhancements that aim to improve the performance of low-spec devices.

In this pack, we will find the light Android, especially designed Google Apps, and a separate version of Google Play.

We should note that Android Go will not be available for installation on our old devices, so we would need a device with it pre-installed.

Android Oreo is the base of Android Go. It is optimized to run on devices with 512 MB to 1GB RAM.

Meanwhile, the size of the lightweight Android is half of the regular Android Oreo version, which is over one GB. 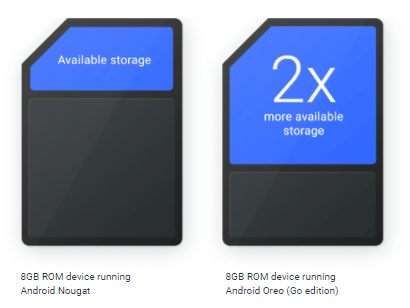 In this way, the device doesn't require large storage, and we still have space left for photos, music, videos, and apps. After all, most Android Go devices have between 8 to 16 GB of space.

Reports say that the lightweight Android devices open apps 15% faster than the previous version of Google's operating system, although this is a general fact for Android Oreo. 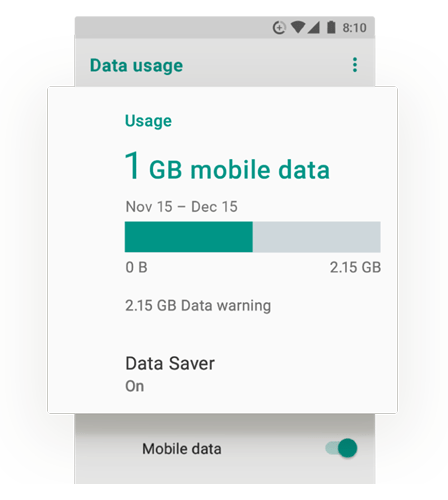 Besides, with the Data Saving mode active, we either don't download any images, or they are smaller in size, so they take up less space on our device.

Read more about saving data in our step-by-step guide.

Just like the lightweight Android Go, Google's Go app versions are lighter than their counterparts and have lower requirements. 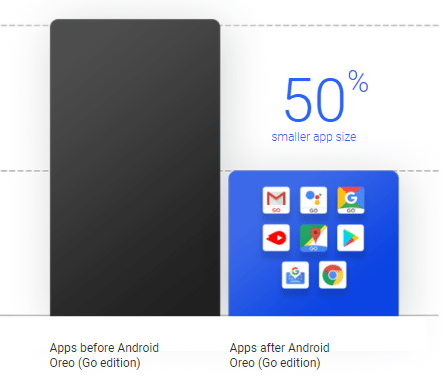 All of them use less RAM, while they are half or even smaller in size than their regular versions.

Android Go smartphones come with just nine pre-installed apps, and they are the following:

Next, we are going to take a look at a few of these apps, but keep in mind that all of them might have fewer features, which is reasonable since they are a lot smaller in size. 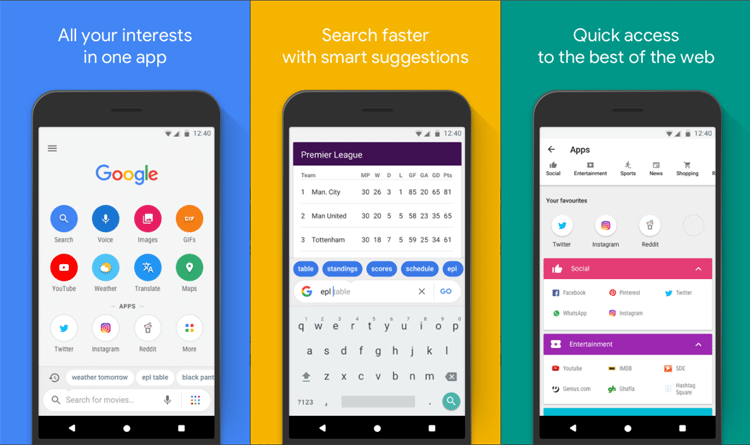 It offers us almost what the classic search engine does, but tries to use as little RAM as possible.

The Google Assistant app has not been globally released yet, but Google has created its lightweight Android version. 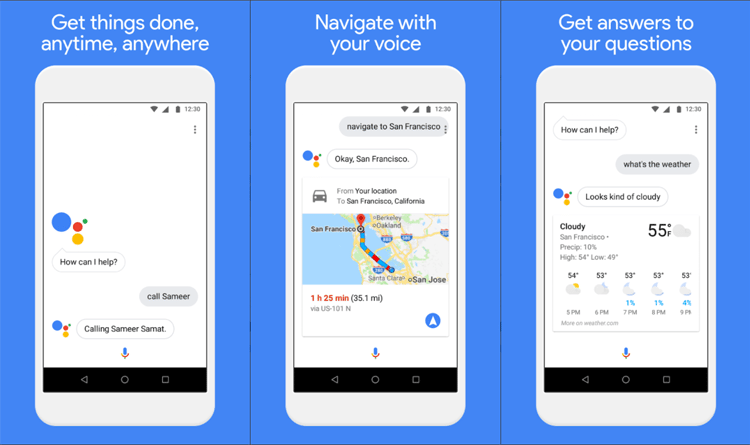 It is fully functional as an app, although it lacks some features.

For example, we can not manage our smart devices with its help or set reminders. Nonetheless, we can run apps, set up alarm clocks, and ask questions. 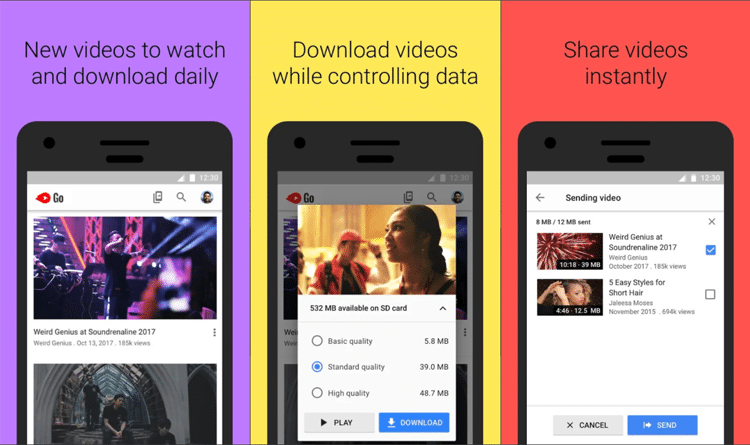 The reduction in app size and the optimization had a substantial impact on how different the app is from the original. Its UI is quite different, with several features entirely absent.

Nevertheless, it has some very interesting and useful features. For example, it allows us to download videos in order to view them later.

The reason why this feature exists on the YouTube Go app, rather than the standard one, is simple. Live video viewing requires more system resources than watching a local video. 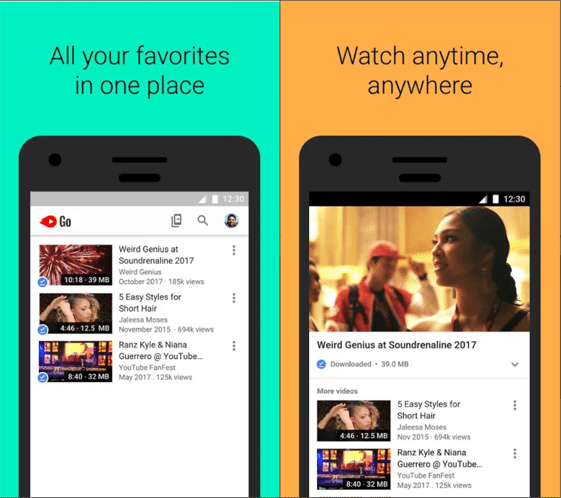 It also allows us to send and receive videos via Bluetooth, aiming to reduce the data we use.

Google Maps Go isn't exactly an app since it's nothing more than a simple shortcut. 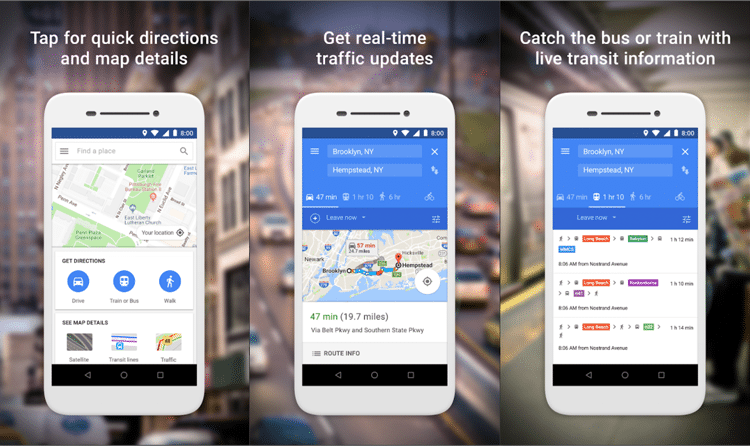 It basically adds an icon which opens the Google Maps page on Chrome. This is a special version of Google Maps, designed to run on lower spec devices.

Gmail Go, is the lightest version of the email management app. 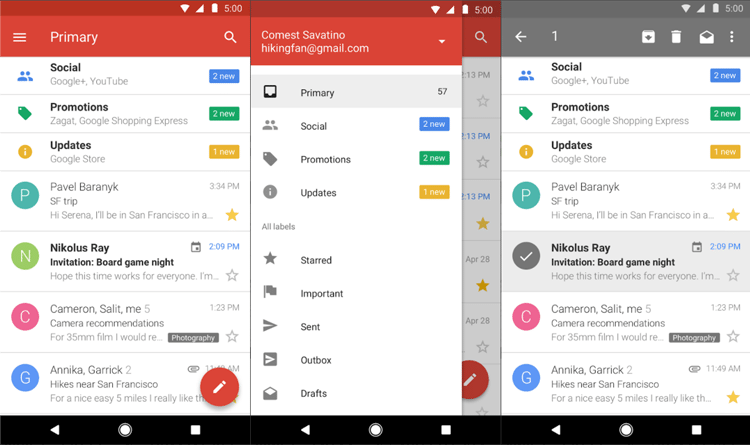 The Go version has the essential features of the full Gmail app and has a similar user interface.

What sets Gmail Go apart is the smart categorization of our emails. Thus, the messages from friends, family, social networks, and so on, are in separate categories.

The application also has a spam filter and uses the 15 GB of free storage that Google drive offers.

Needless to say that Gboard Go is a light version of the original app, designed and pre-installed on the Android Go. 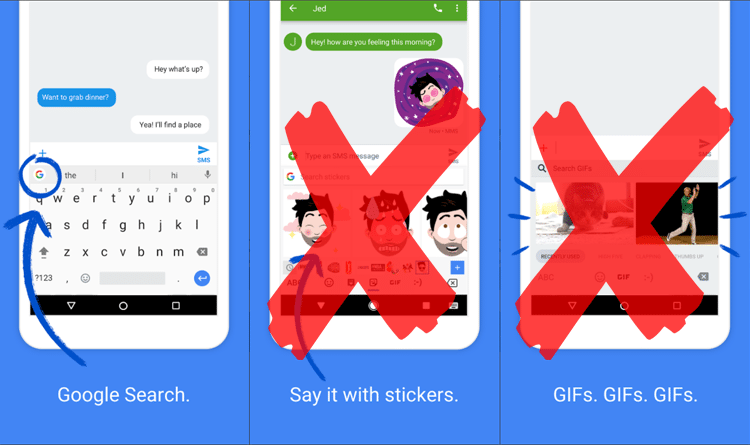 In general, it looks and functions like the regular app. Of course, some features are missing, such as the GIF search and stickers.

The only reason to use Gboard Go instead of Gboard is the RAM. The parent application requires approximately 70 MB, while the Go version requires only 40 MB.

We don't have much to say about Chrome since there is no Go version for the company's light Android. 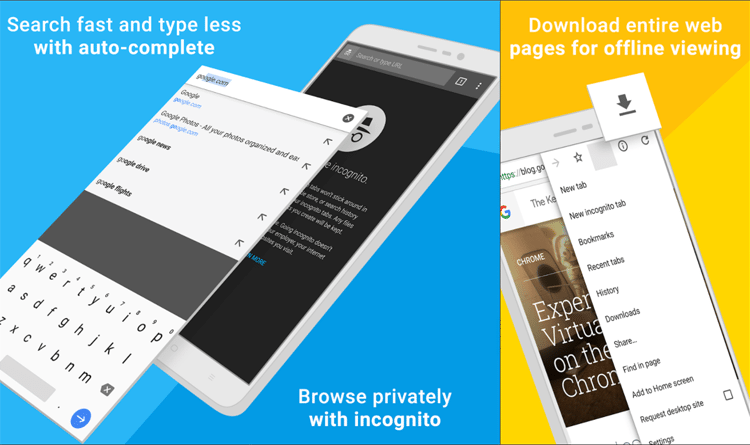 It's pre-installed on Android Go devices, and it is already set on the low-usage setting.

Google impressed many with Files Go. This is a file management app. 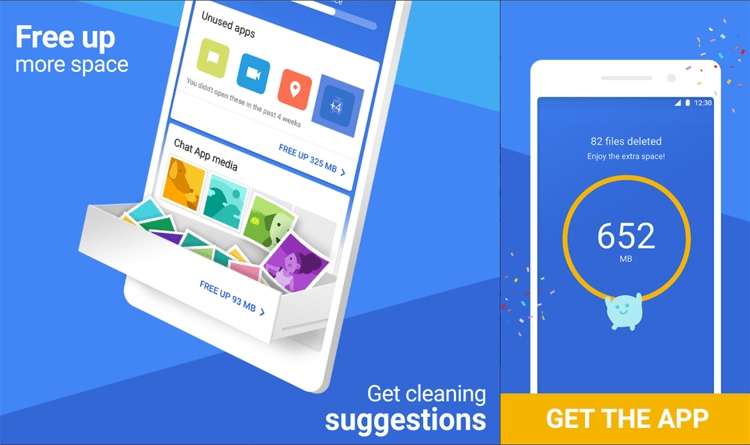 Files Go is small, light, fast, and with countless possibilities. At the same time, it is the only Go app that is available for all Android versions.

Read more about Google Files Go, and find out how it saves us space in our detailed guide.

How To Save Space On My Phone With Google Files Go

It is worth noting that several developers have begun developing optimized apps compatible with the Android Go. Of course, with the help of the Google's Developer Guide.

What about the Play Store?

There is no reason to worry since everything is fine with the Play Store on the Android Go. 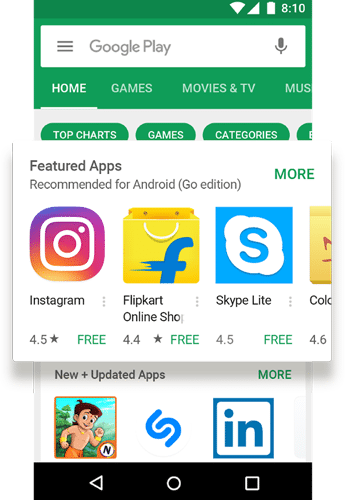 There, we will find all the available applications, and an environment similar to the regular version's one. The only difference is the home page.

On the Android's Go Play Store home page, we will find some recommended lightweight apps that will fit perfectly in our Android.

What is the purpose of Android Go

India is a rising smartphone market, among many, and Google wants a share of the pie. 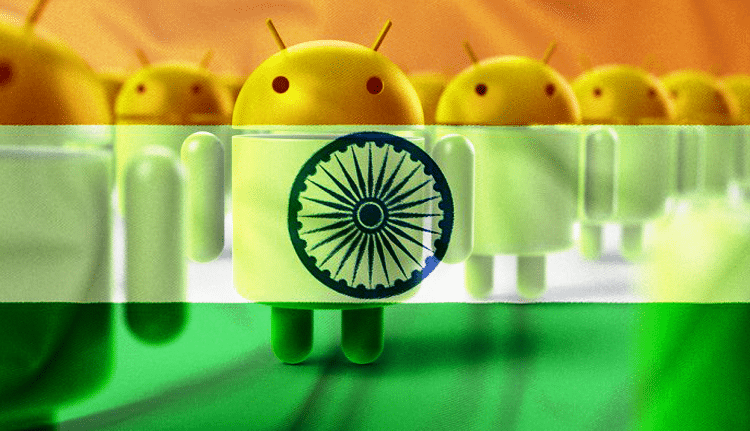 Meanwhile, the purchasing power of such countries is much smaller than that of Western markets. Thus, companies are geared towards creating low-cost devices of under 100 dollars.

At the same time, they want these devices to be functional, to have an adequate storage space, and reduced data usage.

In theory, it's easy, but it is different in practice. However, Google did it by designing the Android Go. 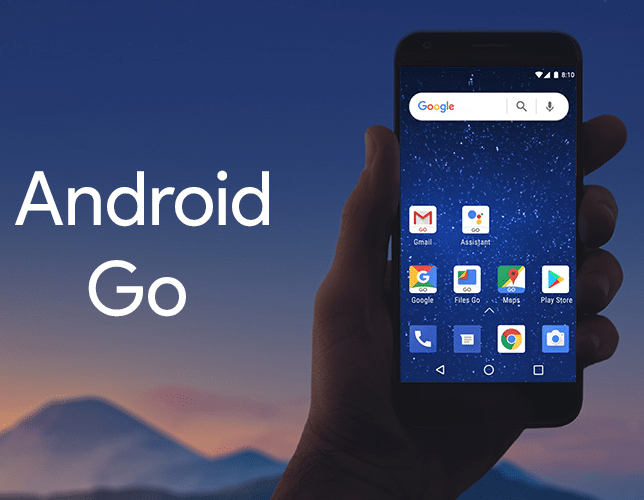 Google worked with several device and hardware manufacturers and managed to reduce the cost of building materials without affecting the quality or aesthetics of the devices.

And this is how Android Go was created, and thanks to the Go apps, these cheap devices work perfectly without struggling.

The goal is to keep the cost of the Android Go devices at under 100 dollars. This is relatively difficult, but the companies have succeeded, and they already offer us some great devices.

Alcatel 1X is the most talked about Android Go device, and costs approximately $100. 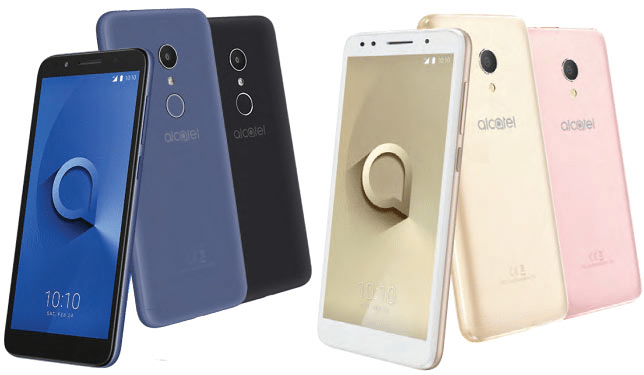 Next in our list is the Nokia 1, which most people say is the best choice when switching from a traditional phone. 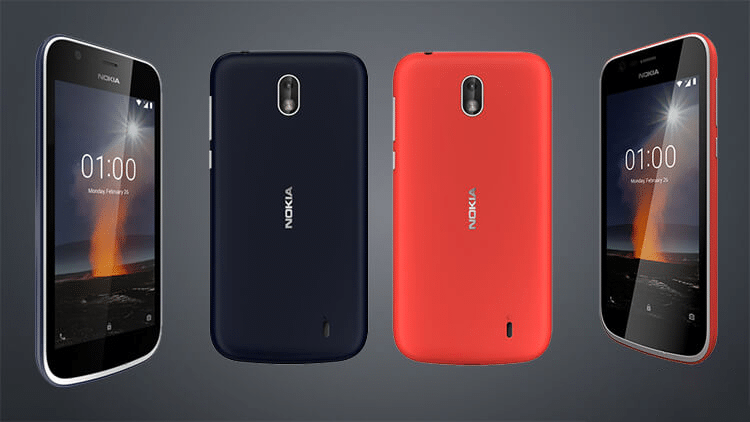 With a 4.5-inch screen, 1GB of RAM, and a low-performance four-core MediaTek processor, it's the perfect first smartphone for someone.

Especially since we can find it for approximately $70 on Amazon.

ZTE's Android Go device, is Tempo Go, and costs about $80. 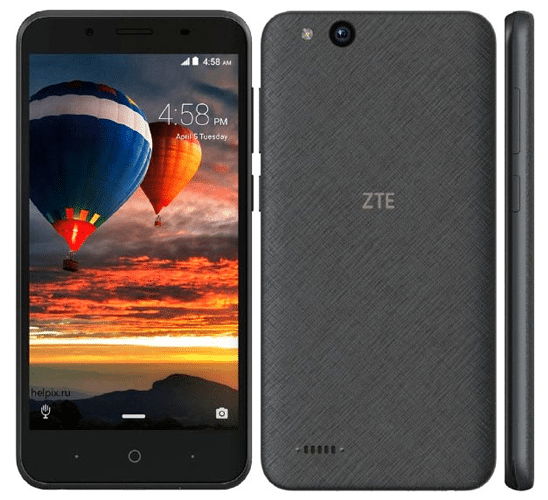 A few more budget-friendly devices are the GM 8 Go, the Lava Z50, and the Micromax Bharat Go. 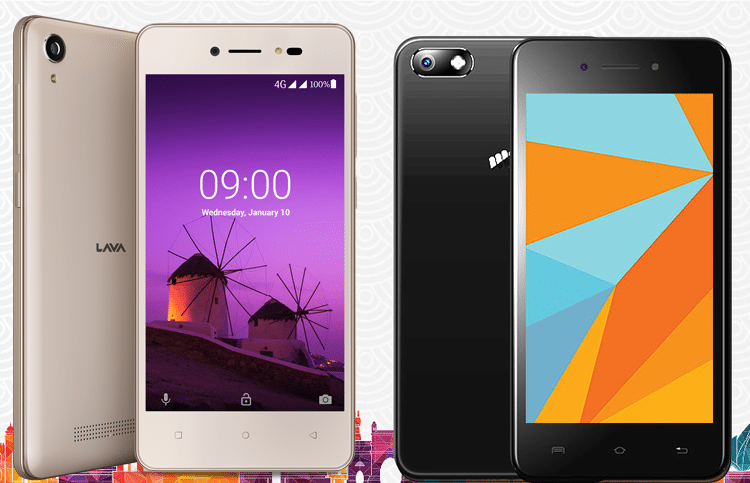 All of them seem to have exciting features, especially for their price. Google with Android Go seems to have managed to create a new category of smartphones.

What is your opinion on the Android Go?

Google designed a lightweight Android, applications enhanced explicitly for it, and a custom Play Store.

At the same time, several companies have teamed up with Google, with even more to follow in creating such cheap devices.

What is your opinion on Android Go? Would you buy a device that runs this version of Android? What do you think about the Go applications?

Previous Post: « The Best Portable Games That Run From a USB Flash Drive
Next Post: What Is Massdrop: The Power Of The Many For Better Prices »