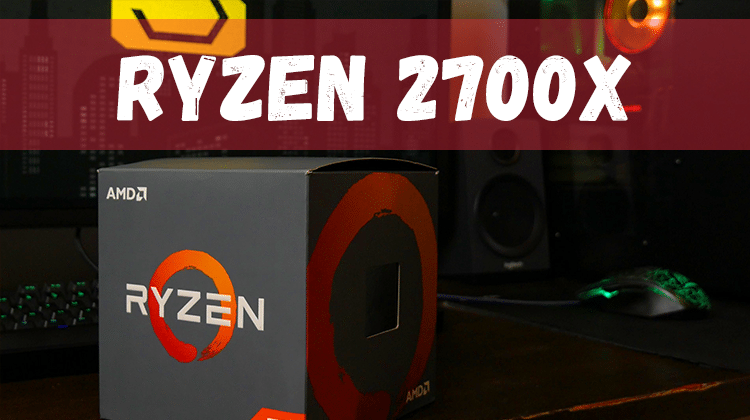 In April 2018, AMD released the new Ryzen processors, which are a refresh of the first generation that came out last year. We got our hands on the leading chip of the series, the Ryzen 2700X, and tested its strengths and weaknesses over a period of three months in various demanding tasks on our computer. In this guide, you will find the processor's review, regarding performance in real case scenarios.

AMD came back in the spotlight a year ago, wherein 2017 the company released the Ryzen processors. 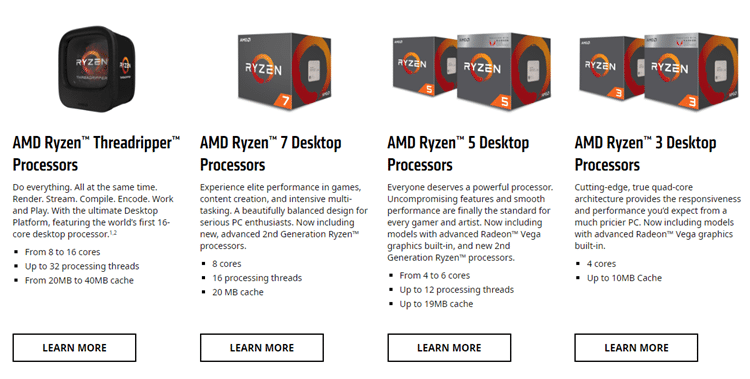 With Ryzen, for the first time in years, AMD offered a competitive solution against Intel processors.

This is more of a refresh of the original Ryzen processors, rather than a new generation.

The first generation uses the Zen architecture. The new Ryzen CPUs use the same architecture, but with several improvements; the company calls it "Zen+."

In this review, we will see the Ryzen 2700X, which is the best processor for the AM4 socket - for now.

The company itself describes it as the best multi-core processor for a mainstream desktop computer for 2018.

AMD equipped the 2700X with eight cores and 16 threads, with a base frequency of 3.7Ghz in each core.

With the clock boost, the Ryzen 2700X can reach 4.3 GHz. Of course, the processor is unlocked, and we can manually, overclock it.

The TDP is at 105W, and the maximum allowed temperature should not exceed 85 οC.

The box is quite beautiful, with a gray background and red details. 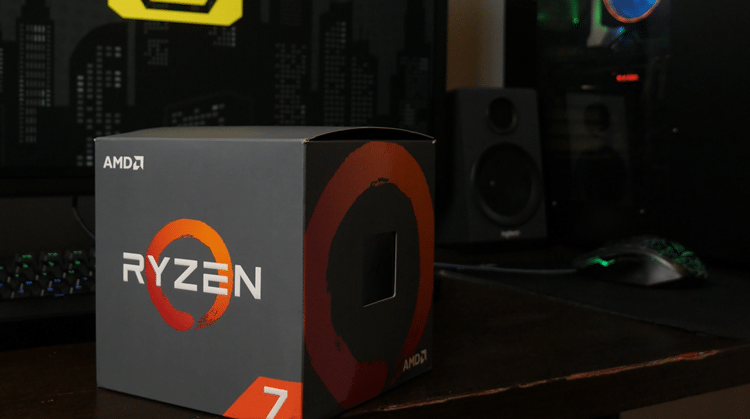 Regarding the installation, we did not run into any problems. The AM4 socket uses pins on the processor. 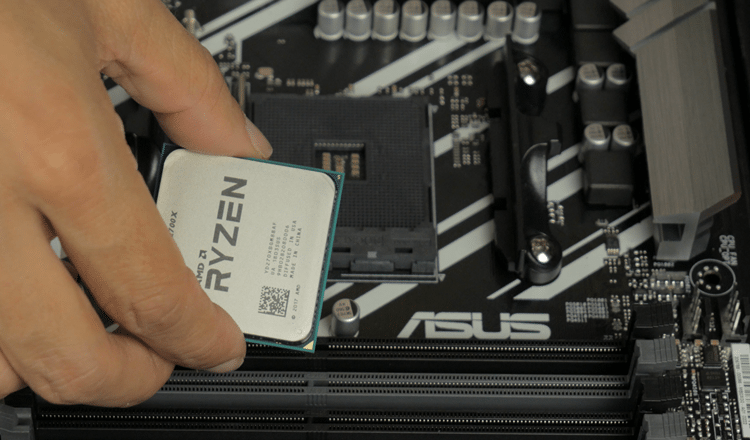 The heat sink was very easy to install. On the side, it has two ports that we can use to connect the controllers for the RGB lighting. 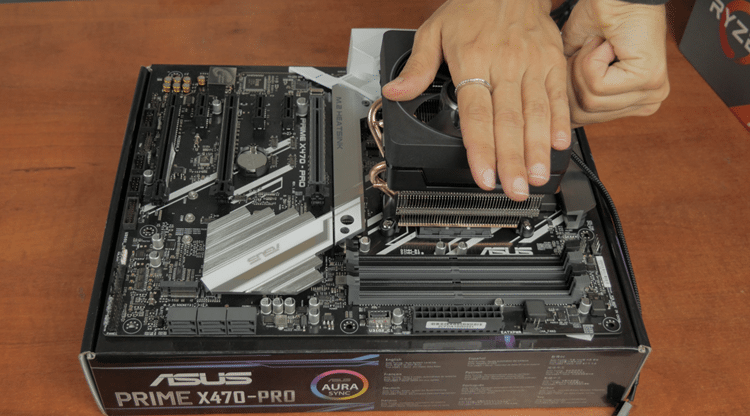 In short, our first impressions during the installation were positive.

With the new Zen + Ryzen, AMD also brought a new chipset; the X470. 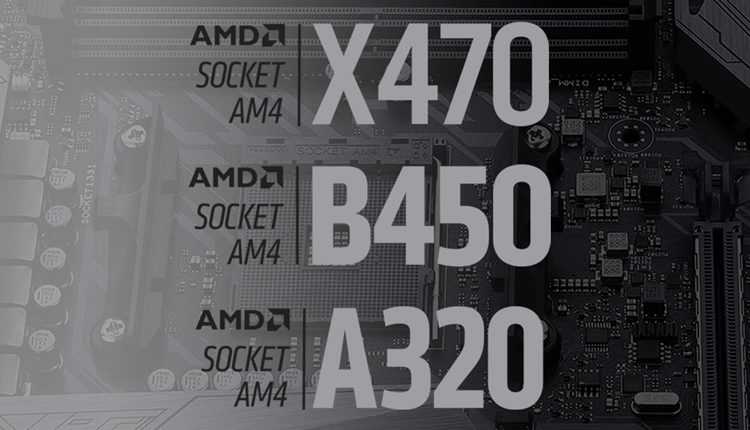 This chipset is meant for enthusiasts, so the motherboards with the X470 are a little overpriced. Until recently, there was no other affordable solution, except for last year's 300-series motherboards. A few days ago, however, the B450 came out as the successor of the later B350. 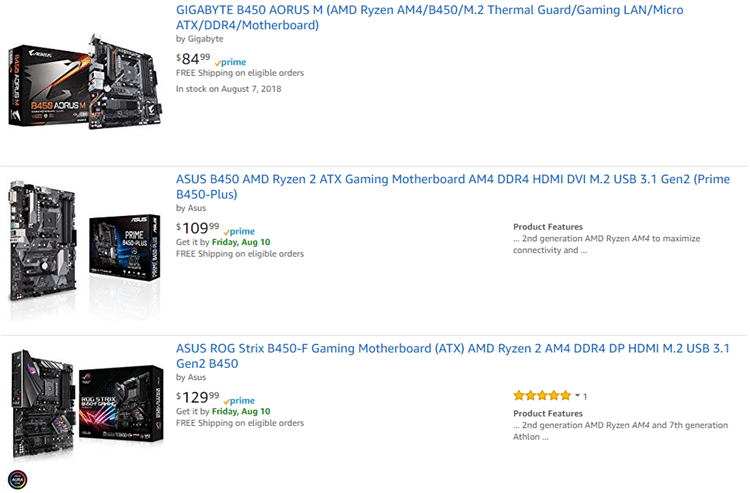 In any case, the new generation is compatible with the 300-series chipset that came out last year, as soon as we perform a BIOS update to our motherboard.

In general, the new Ryzen CPUs are fully compatible with last year's chipsets. The only improvement we get with the new X470 is the built-in support for AMD's StoreMi technology, as well as better support for higher frequency memories. 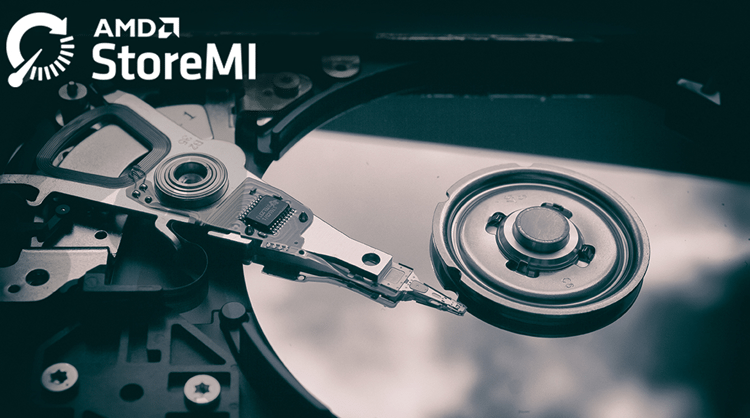 StoreMi is a tool that can "join" two or more disks. Then, it places the files we use most often in the fastest one.

As we add discs to the system, StoreMi automatically does the same process. In fact, we can add up to 2GB of RAM to our "disk" for even higher speeds.

According to AMD, the new chipset can handle the higher frequencies of the Ryzen refresh more efficiently. So, we may see a small improvement in performance if we use a new motherboard, but nothing special enough to justify a motherboard upgrade.

Before we dive into performance, we should have a look at the Wraith Prism; it's the stock heatsink for Ryzen 2700X. 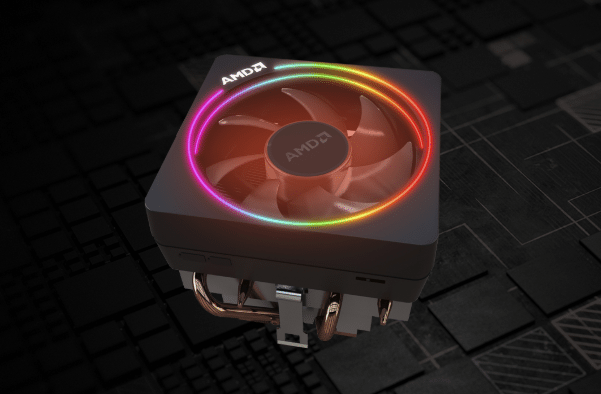 Τhe Wraith Prism itself is rather impressive for a stock cooler. It might have something to do with the RGB lighting, but it managed to draw our attention from the first boot. 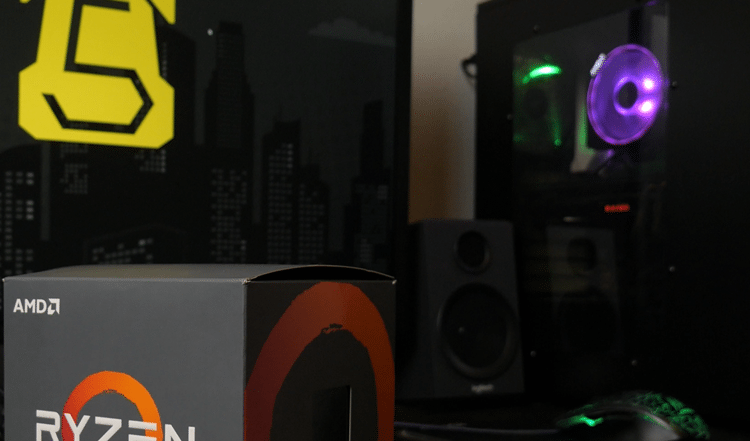 On the side, as we said, it has two ports; a four-pin header to sync the lighting with our motherboard and a USB 2 to control the lights with a dedicated software made by CoolerMaster. 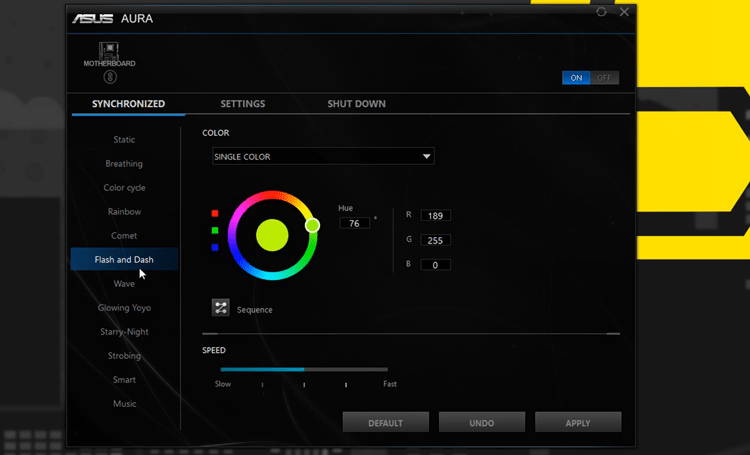 We should mention that it has the standard mount of the old AM3+ and FM2+ sockets; thus, the heat sink can be installed on these motherboards as well. Of course, it is not sold separately.

In any case, at the bottom the heatsink has a pre-applied thermal paste, so all we had to do was mount the cooler and boot the computer. According to our tests, the stock paste is of high quality. 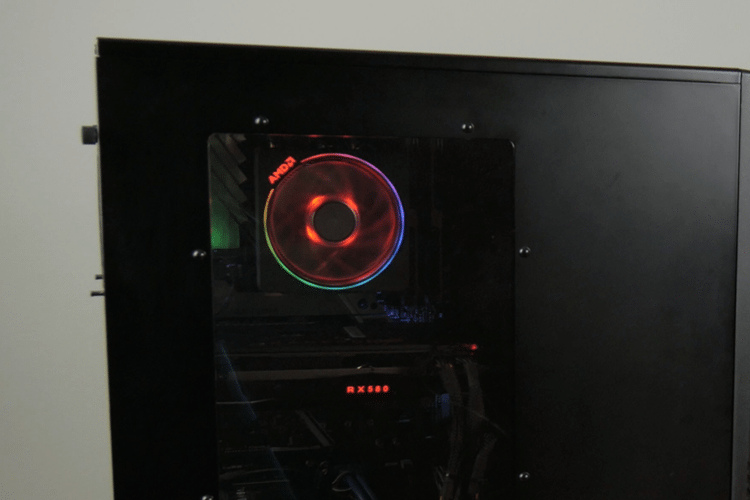 In addition to the RGB ports, on the same side, the Wraith Prism has a tiny switch with "L" and "H" indications for low and high. 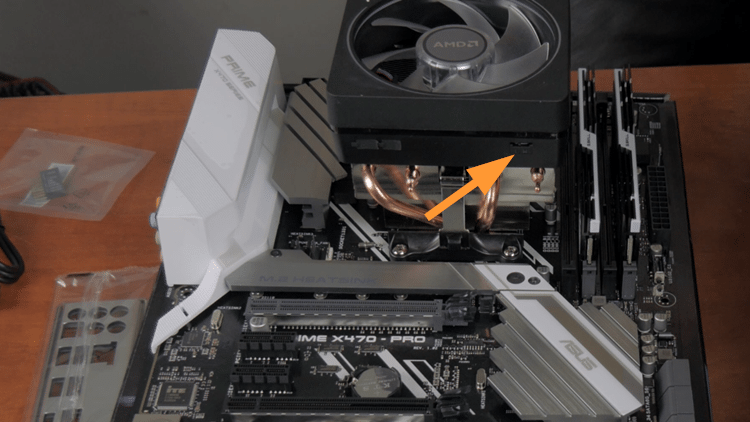 If you are interested in keeping the temperatures as low as possible, you should set the switch to high.

According to our measurements, we saw at least 5 degrees difference in maximum temperatures with this profile.

More specifically, at high, we were close to 80 degrees during a stress test, which is within the processor's thermal limits.

However, the high profile has a considerable disadvantage: you feel that there's an airplane ready to take off in your room. When the processor operates at high frequencies, the noise is quite intense. 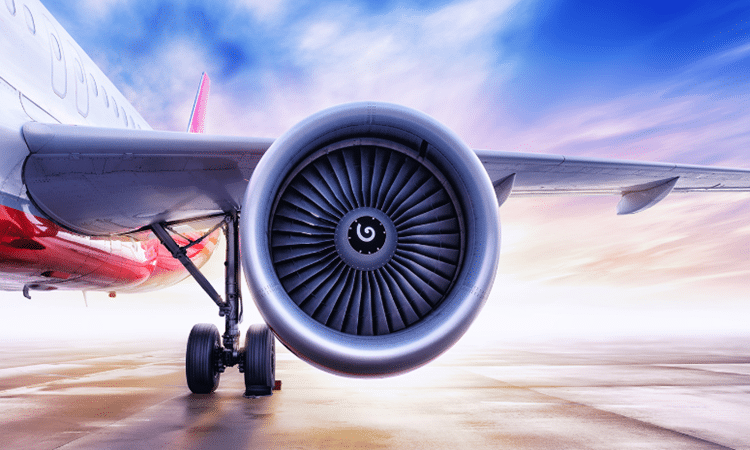 We prefer a quiet environment, but we chose the high profile for better cooling

Two of the main features of the refreshed Ryzen is Precision Boost 2 (PB2) and Extended Frequency Range 2 (XFR2). 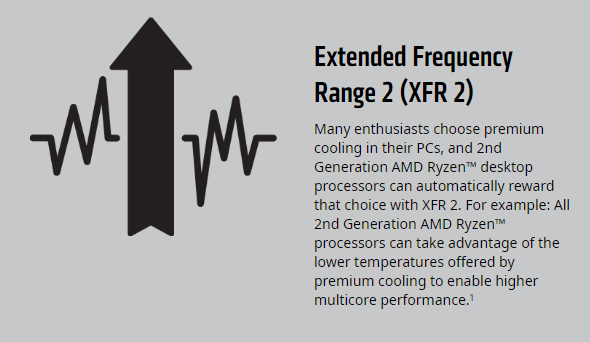 These two technologies are AMD's method of automatically overclocking our processor without having to do anything at all.

We are talking about real overclocking on all cores, not just one. The results can vary, depending on our temperatures and other variables.

In our case, the processor reached 4 - 4.1Ghz on all cores under stress, with the stock cooler at high. For those who love plug & play devices, this is perhaps the most significant benefit of the new Ryzen.

AMD calls it SenseMi because the processor can "feel" several variables, and adjust its frequency accordingly. Of course, it's not present only on Ryzen 2700X, but in the rest of the series as well.

Simply put, the combination of XFR2 and Precision Boost 2 gives us - at any moment - the maximum frequency that our processor can reach under the given conditions.

For example, when the computer is in idle mode, the frequency drops to the minimum for energy saving. When we do some demanding work, the processor will reach the maximum frequency on as many cores as needed.

During summer, where our room temperature could reach 30oC or more, the Ryzen 2700X goes up to 3.8 - 3.9Ghz under stress with the stock cooler, compared to the 4.1Ghz that was achieved three months ago.

Is it worth to overclock manually?

Generally, overclocking needs a lot of tests and effort. To hit a stable overclock, we have to experiment, adjust various parameters, run endless benchmarks, and so on. 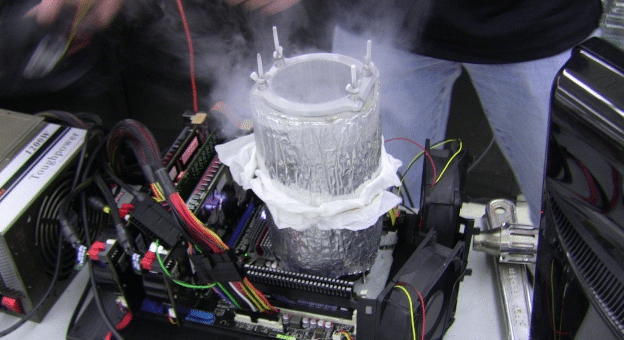 This is the magic of Precision Boost 2 and XFR2. Even those that have no idea what overclocking is can have the maximum capabilities of their processor automatically.

For this guide, we also tried to overclock the Ryzen 2700X with the stock heatsink manually. Not only was it a waste of time, but it was also useless.

Although we got slightly better results in benchmarks, we didn't get more fps in games, and overall, our performance was inferior to automatic overclocking. 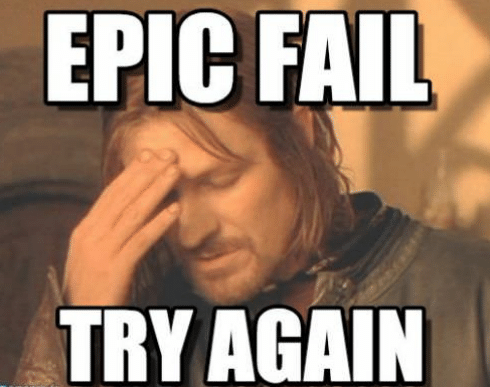 Our advice if you have this processor is to forget what you know and let it do its job.

Activate the XFR2 in the BIOS if it is not enabled, put Precision Boost on level 2 at most, and enjoy the results. 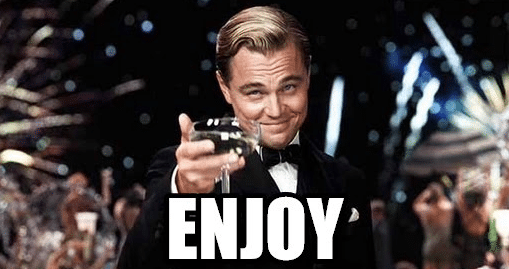 If you like to tinker, we suggest creating a small offset of 0.1v.

We don't know from personal experience if that's the case with other Zen+ processors. However, we read that the 2600X has similar behavior.

In fact, users report that manual overclocking may be worth only in non-X processors, as they have a lower boost frequency.

With a simple search on the internet, we can find dozens of benchmarks and comparative tests of the Ryzen 2700X. 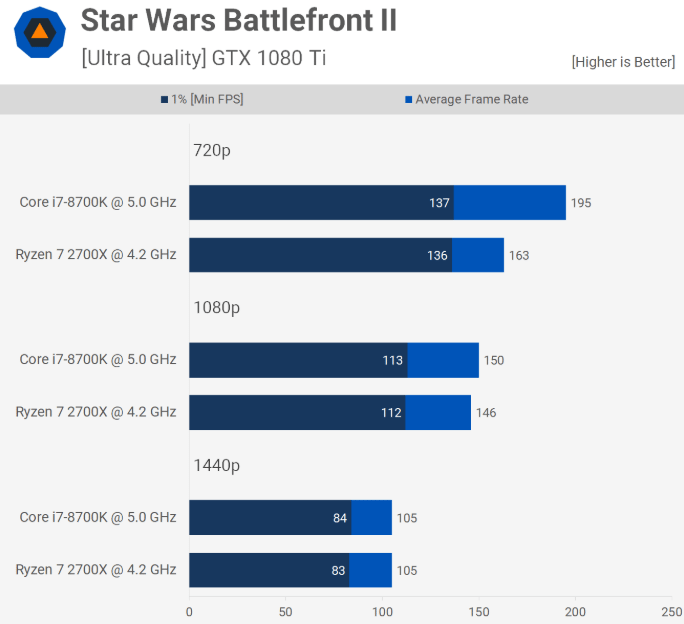 However, we also ran our own benchmarks with the Wraith Prism in high profile.

In the matrix below, you can see our results on some of the most popular benchmarks. 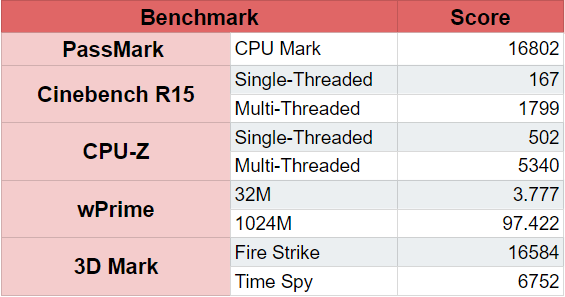 With regard to temperatures, with the heat sink profile at high, we got 38 degrees in idle. During the stress test, temperatures reached 82 degrees, as seen above.

We used the Ryzen 2700X extensively for three months, with the primary purpose of editing 4K videos.

Our impressions could be summed up in two words: It rocks! 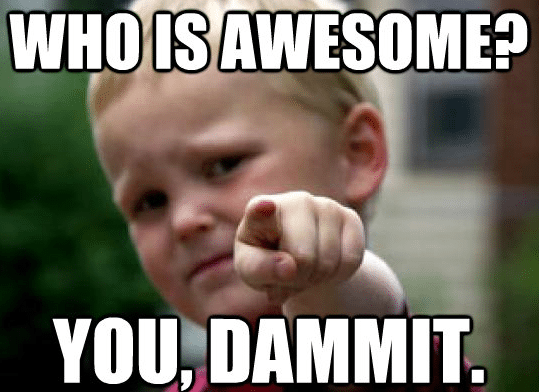 First of all, the fact that we didn't have to buy a better cooler automatically makes it the most VFM processor for its class.

The only reason we would change the Wraith Prism is to have less noise. Of course, with a better aftermarket cooler, we could achieve higher overclocking frequencies with XFR2 and PB2.

To achieve any noticeable improvement, we have to spend at least $60 for a good air cooler, or more than $100 for an AIO solution. 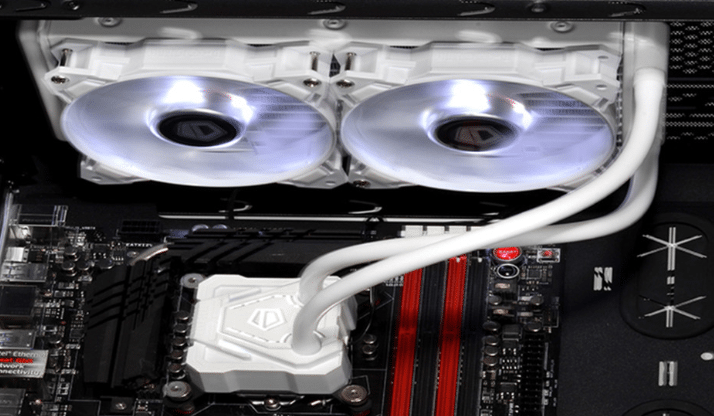 Overall, the Ryzen 2700X did great at rendering; the performance was impeccable, and we used 4K footage. In 1080p, it gets even faster.

The Ryzen 2700X and the new generation is also suitable for games. Gaming and single core performance have been AMD's weak points for years. Finally, with Ryzen, AMD is back in the game - pun intended.

In comparison to Intel's 8700K, which is at the same price range, the Ryzen 2700X falls only a bit behind. AMD demonstrates this comparison on the processor's site. 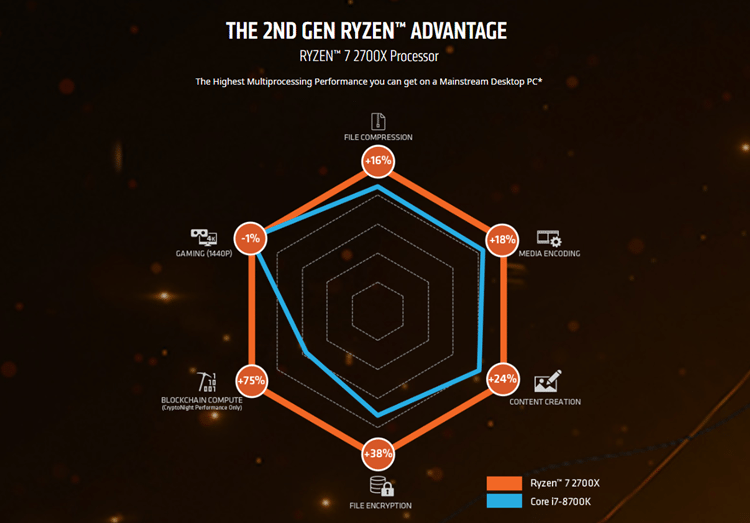 According to the diagram, AMD claims that the Ryzen 2700X is much better than Intel's 8700K in most cases, except gaming scenarios, where Intel performs 1% better.

Now, as far as multitasking is concerned, the Ryzen 2700X shows its 16 threads at every opportunity. You could render videos in the background, while comfortably running any other applications - even games. 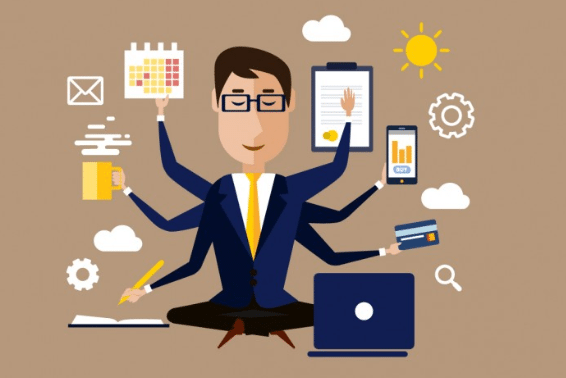 We tried to do streaming, gaming, and video capturing simultaneously, and it didn't feel a thing. In real-life scenarios like this, we didn't find ourselves looking for more processing power - not even once.

In other words, we recommend the Ryzen 2700X for every use, combined with an X470 motherboard. Ryzen also performs much better with high-frequency memories, from 3200Mhz and upwards.

Such a computer will keep you happy for years, whatever you intend to do with your system.

This was our review for Ryzen 2700X. Do you have any questions about the processor? Would you like to share your own experiences?