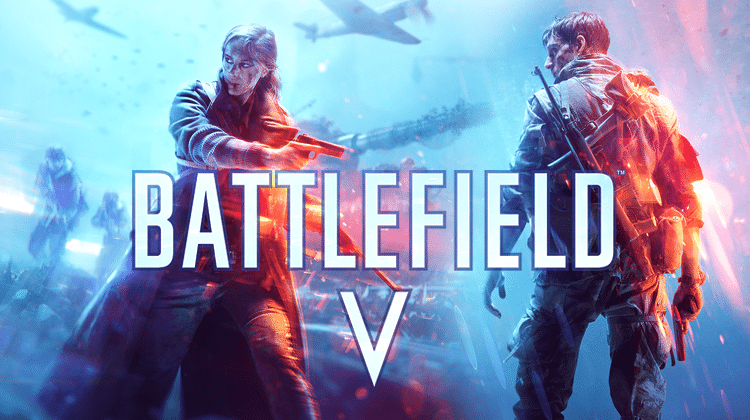 The open beta for Battlefield V ended on September 11th, and we were a part of it. Let's see everything that was available in this stage of game development, and what extra content we can hope for when the game releases. Of course, there were bugs, lags, and various issues, but that was to be expected. The question is: Is Battlefield V anywhere near being ready to hit the market? And, most importantly, will the game be worth the $60 EA is asking?

Try before you buy Battlefield V.

When can we expect the final version of Battlefield V?

On May 23rd, EA announced Battlefield V, with a release date of November 20th for the general public.

Those with an active EA or Origin Access subscription will be able to try Battlefield V from November 9th. Meanwhile, those who have pre-ordered the Deluxe Edition can play the game from November 16th.

Battlefield V is in the spotlight for various reasons. At first, players attacked the company for the fact that they included women soldiers in the reveal trailer, even though it is historically accurate.

Then, during the open beta, players discovered a relatively severe problem with the profanity filter on the chat.

Finally, there were several issues with the servers, matchmaking, and the graphics of the console version.

We tried to keep an open mind, and not be negatively biased towards the game while playing the open beta. How did we like Battlefield V and what were our first impressions?

The open beta lasted a week on PS4, Xbox, and Windows. There were two maps, two different modes, and most of the game's items available.

The maps we had access to were Narvik and Rotterdam. The game modes we could play were Conquest and a part of the Grand Operations. 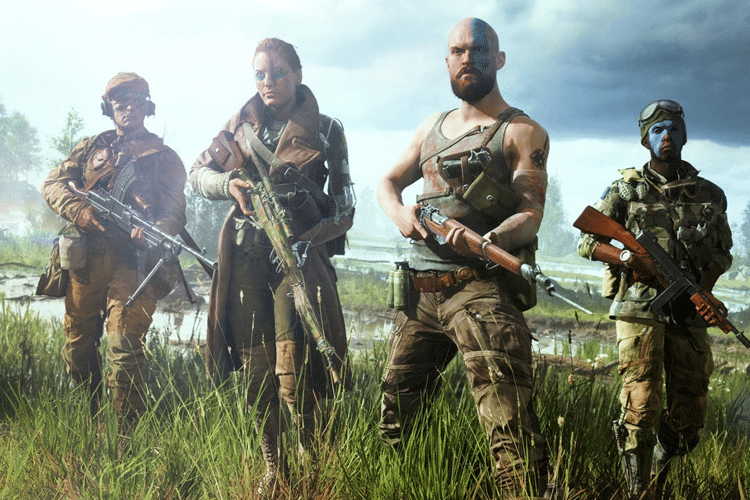 In the open beta, we were able to use the weapon upgrade tree, and all the classes were available for us to try.

EA Digital Illusions CE AB (DICE), the subsidiary of EA that organized the beta, had some rewards for those who participated in the open beta. The company offered an exclusive prize, which they permanently added to each player's account.

If we completed the missions of Shock Troops, the only available chapter from Tides of War, we would get a dog tag. 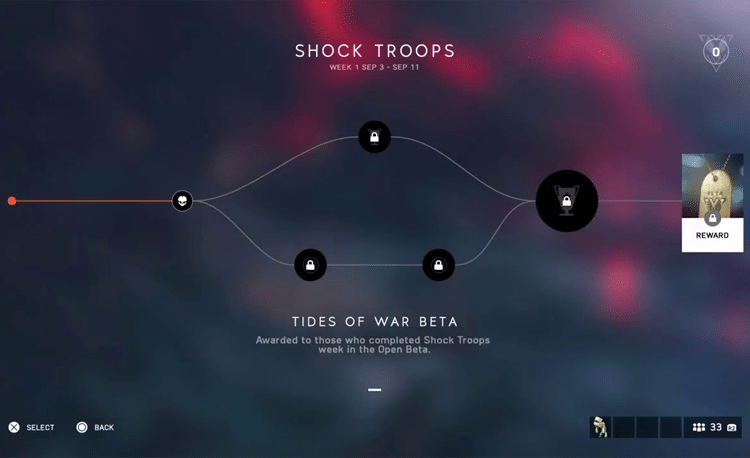 Those who participated in the Closed Alpha and completed the missions, also got a dog tag.

For the open beta, EA had included only a few of the total number of modes we can expect in Battlefield V. The final version will have several more, ranging from the single-player campaign to a Battle Royale mode.

The first available open beta mode was Grand Operations, an upgraded version of Operations in Battlefield 1. 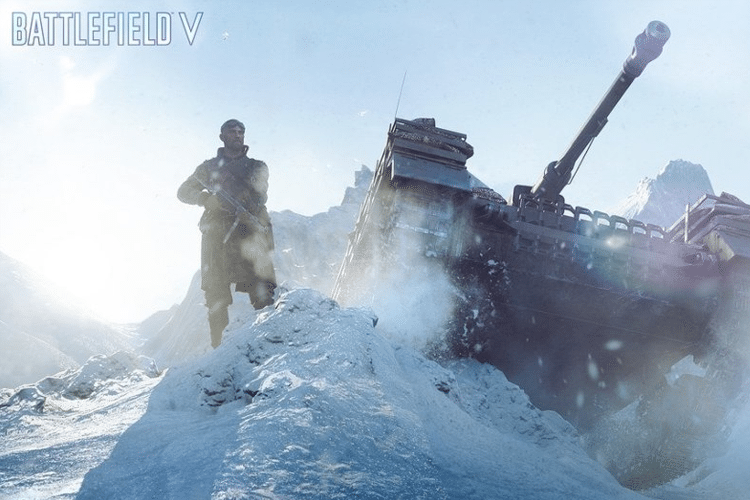 The Grand Operations is a narrative experience inspired by historical events. This mode has multiple in-operation days, each set on a different location. In each location, we have to do specific actions. These actions and our overall performance determine the next day.

If, for example, we do well and achieve our goals, then the next day we will have an adequate supply of ammo or vehicles. If not, then we will have fewer respawns, vehicles, or other resources.

Most Grand Operations last for three days, which translate to about one hour of gameplay.

If we survived until now and are still tied with our opponents, we would play the Final Stand. The outcome of this battle will determine the ultimate winner of the Grand Operations.

Here, our health and ammo are what we had left from the previous days. Meanwhile, we can't respawn, so if we die it's over for us.

At the Final Stand, we lose only when everyone on our team dies. The team that will manage to have at least one survivor will win the Grand Operations.

However, we couldn't celebrate our victory on the Final Stand. In the open beta, we could only play the first two days.

The Conquest is a staple mode for every Battlefield game. In this mode, there is a massive map in which 64 players fight for the win. Divided into two teams, with eight squads each, we try to control the majority of the flags. 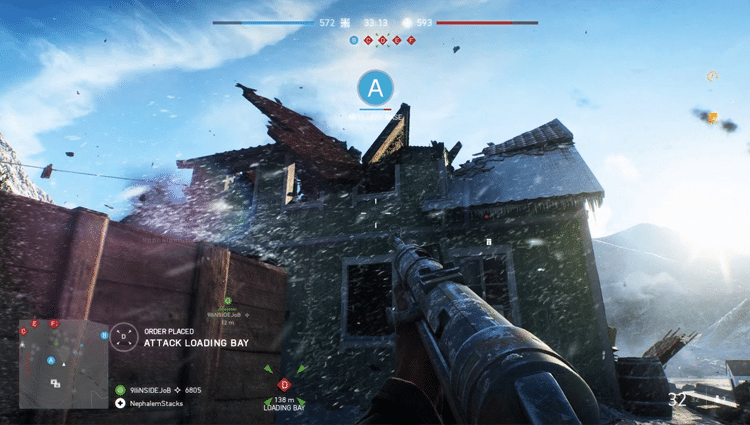 EA created Tides of War to avoid microtransactions which would make Battlefield V pay to win. With this system, players will be able to experience distinct historical moments of the WWII. The first chapter is "The Fall of Europe," which covers the beginning of the war. 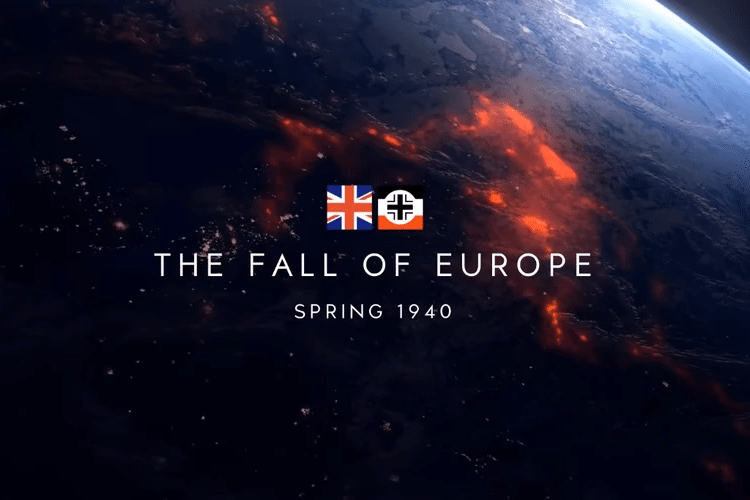 Also, from what we know until now, the second chapter will include battles in the Greek theatre of operations.

DICE will add periodic events that each will span for several months. During these, we will have to do several missions, and upon their completion, win various rewards. 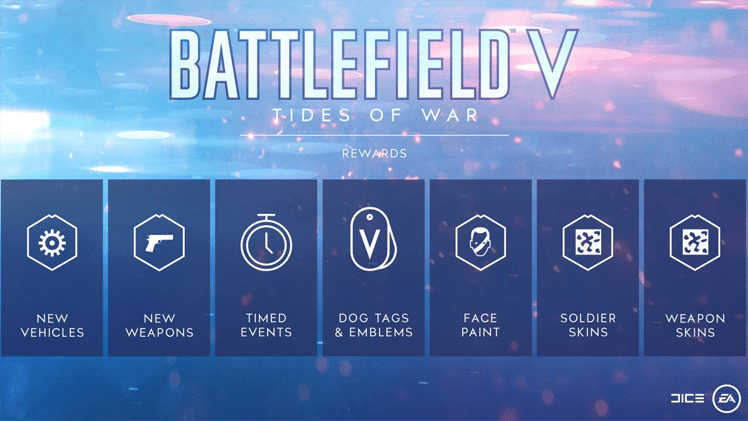 During the open beta, we got a taste of Tides of War by playing in Shock Troops.

The following modes were announced but not available during the open beta.

In Battlefield V we have six classes, four infantry and two vehicles. Infantry units include Assault, Support, Medic, and Recon while the vehicle units are Tanker and Pilot. 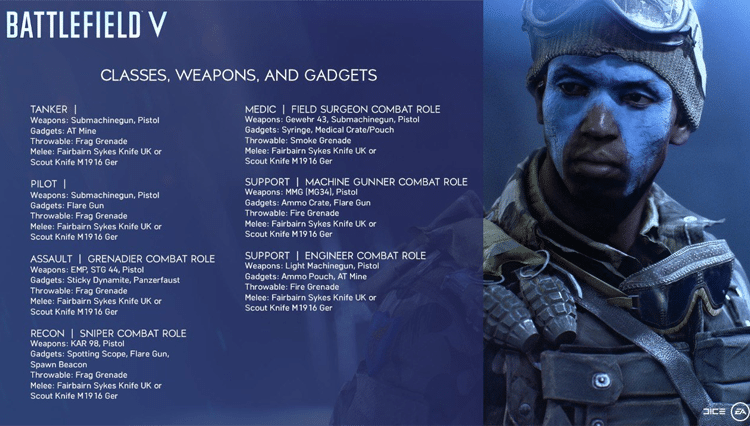 The Assault is the typical fighter that we will meet in every game. It's a simple unit, but it's capable of piercing through the enemies' defenses.

On the other hand, Recon is the traditional long-range sniper. He watches from a distance and spots the enemies through his spotting scope.

Then we have the support units, Support and Medic.

Support builds exclusive Fortifications, from barbed wire to pontoon bridges, to block the enemy troops and tanks. They can also resupply their teammates with ammunition, which is quite sparse in the game. 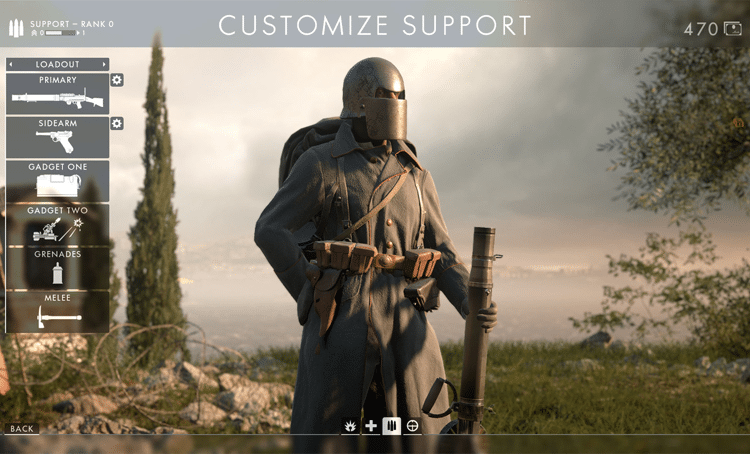 As the name suggests, a Medic is the team's doctor. They carry medical pouches and health packs to heal their teammates. Also, they can revive fallen players much faster than the rest of the classes.

The infantry classes will also have multiple Combat Roles, with which we can specialize each class in a specific role. Each role has different stats, weapons, equipment, and traits.

When the game releases, each class will have two Combat Roles and DICE has plans to add more as a part of the Tides of War service. 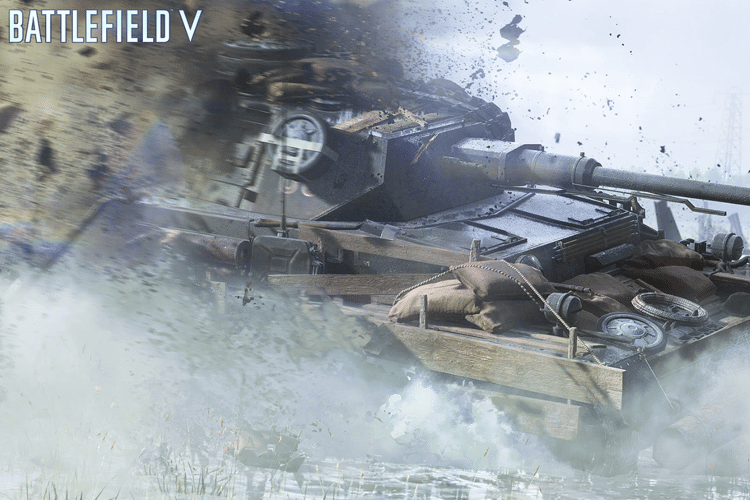 As far as vehicles go, the Tanker is a special class representing operators of tanks, and the Pilot of air vehicles. In general, these classes have very similar equipment with small variations.

In most game modes, our team collects control points during the battle. If we manage to obtain the needed points, our squad leader can call for Squad Reinforcements. 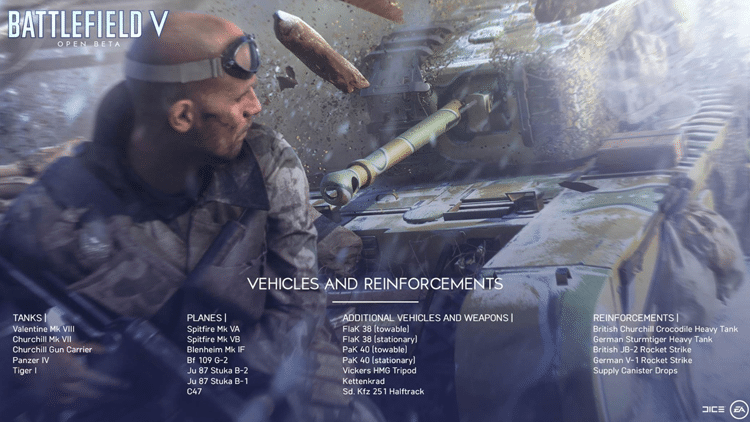 These reinforcements may take the form of vehicles, strike options, or logistical support.

An exciting element of Battlefield V is "The Company", which allows us to personalize our soldiers, weapons, vehicles, and items.

The Company is our personal army, a collection of customized soldiers, weapons, and vehicles. For the open beta, we could create only two personalized Companies, one per faction.

Every soldier at The Company has the weapon of their class, and we can unlock more weapons by playing. Also, every class has four weapons, and each has its own upgrade tree. 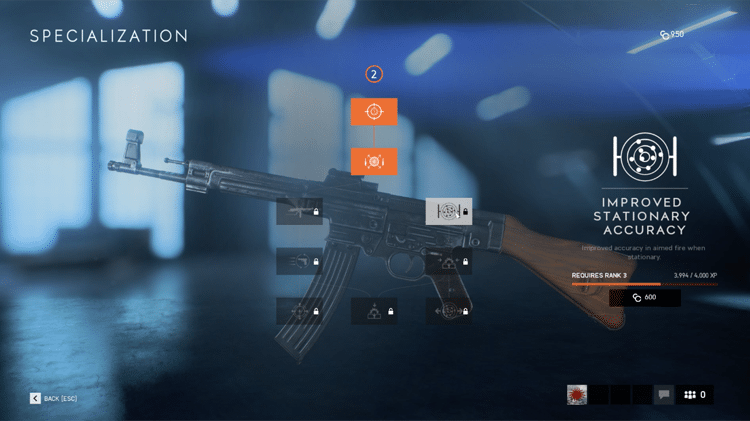 Meanwhile, depending on our choices in the upgrade tree, the appearance of our weapon also changes.

Graphics quality in every platform

Battlefield V uses the game engine Frostbite 3, and the graphics of the game are impressive. The world is incredibly realistic and atmospheric, with fantastic details. 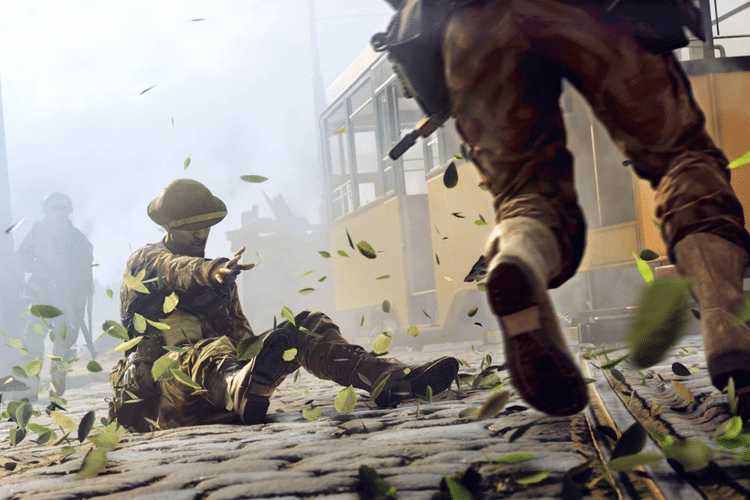 All these sound great, but the problem begins when we play the game.

On the current iteration, the lens flare in the game is particularly irritating. It creates such intense illumination in the world, that half the time we can't see what's going on in front of us. Like in J.J. Abraham's nightmares, our character can actually die from the lens flare. 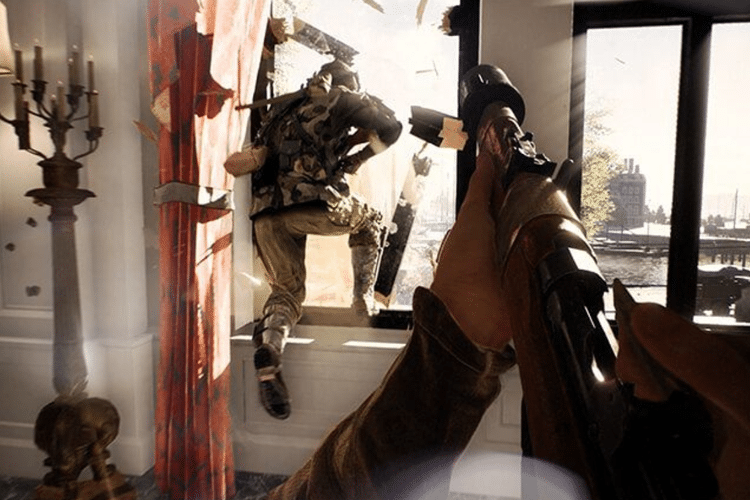 If we are playing on a console, things get even worse. Apart from the lens flare, we also have to deal with awful textures. The closer we get to objects, the more blurry and dirty the textures look. Even the rocks look like a muddy soup.

Among everything, we also experienced massive FPS drops.

Summing up the open beta and Battlefield V

Our overall impressions of Battlefield V open beta were positive. However, not everything was perfect.

The biggest problem of the game is that the developers are trying to please everyone, which is impossible and impractical. As a result, the game has an identity gap.

The modes are more than enough, and the Battle Royale is an overkill. However, the game is fun, especially if we play with friends since playing with random people can get very exhausting very fast. 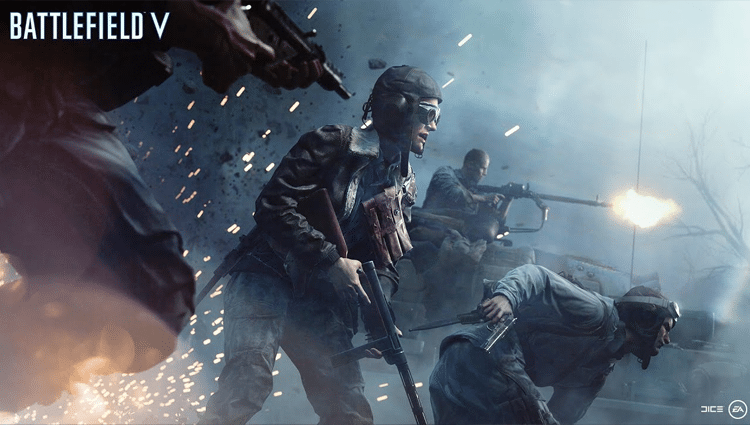 Apart from the issues we already mentioned, the sound wasn't particularly great, which affected the gameplay. The footsteps sound effects are so low that we couldn't even hear someone walking right behind us.

In the available modes, we found small issues with the recons and tanks. The recons could kill us from afar, and the tanks did a great deal of damage without having to restock at the Supply Depots very often. 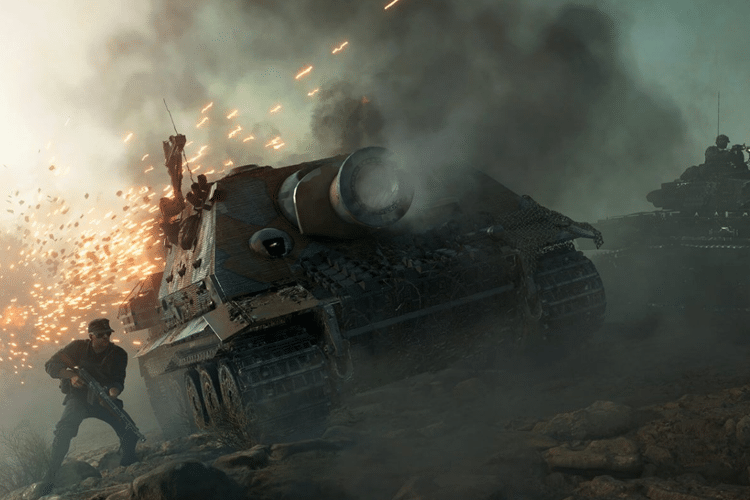 We admit that we had quite a lot of fun playing Battlefield V open beta. But the problems that the game has are plenty, so it's probably a good idea that they postponed its release.

We hope DICE can fix all the problems the game has, and that the final product will worth the wait. Until then, we will see you in the fields of Battlefield 1.

What's your opinion on Battlefield V?

Did you participate in the Battlefield V open beta or did you learn about it from our presentation? In general, have you tried the Battlefield V, and if so, what's your opinion about it? Let us know in the comments below.