Top
Home » Hardware » Looking for a Budget GPU for Gaming? These Are The Best Choices 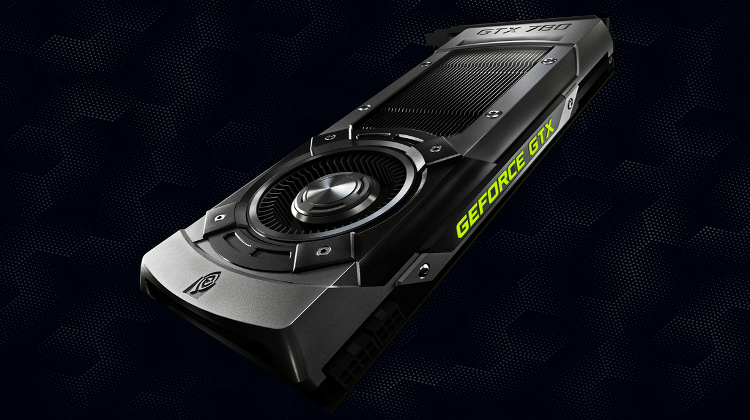 Τhe right graphics card is essential for an enjoyable PC gaming experience. But choosing the best GPU for our money can be a hassle, especially when we are on a tight budget. There are several available options, and it might be hard to find out which one will give us the best possible value for our money. Our guide will help you find the ideal budget GPU for your gaming needs, without breaking the bank.


Unblock any international website, browse anonymously, and download movies and Mp3 with complete safety with CyberGhost, just for $2.75 per month:

Nevertheless, it can run almost any game, provided that you are willing to compromise on graphics quality lower than "Ultra" or "High", going to "Medium" or even "Low", depending on the game.

GTX 1050 comes with 640 CUDA cores, a boost clock speed of 1.445MHz and ridiculously low power consumption. If energy efficiency was our goal, this Nvidia chip would be one of the best GPUs in the market. 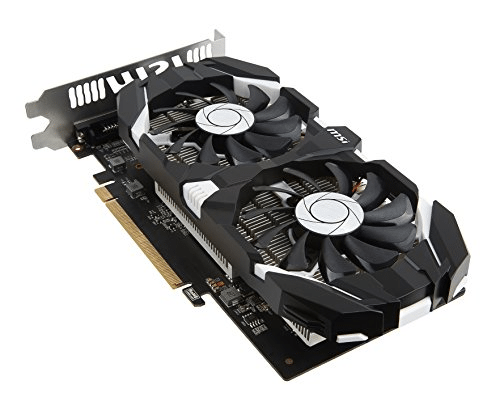 The low levels of power consumption can make this budget GPU ideal as a replacement component for older builds, since we won’t have to upgrade our PSU.

However, the 2GB of video memory rightfully raises concerns about the future performance of the card. Nowadays, and for triple-A games, 2GB is probably too little.

GTX 1050 is an entry-level budget GPU; you can’t expect running games on high or ultra settings. It might even struggle to reach more than 30 FPS on some very demanding titles.

It's on par with a GTX 770, which is three generations behind, and marginally better than the previous generation's GTX 950.

On the other hand, GTX 1050 outperforms the competition in the 130$ price range. Radeon's RX 460, for example, scored lower FPS in every game, even though it comes with two extra GB of video memory. 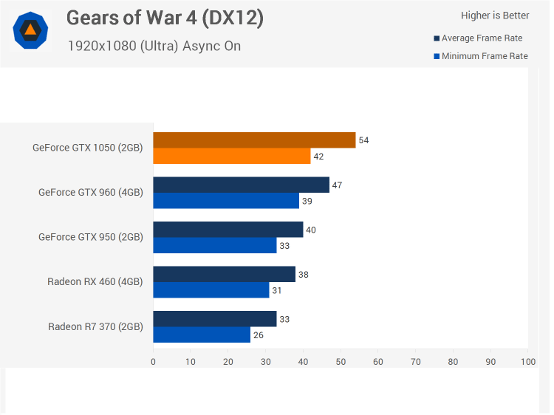 If you are on a tight budget, a GTX 1050 2GB is your go-to GPU for entry-level gaming. Although, if you can spare 30-40$ more, you would be better off getting the Ti version. 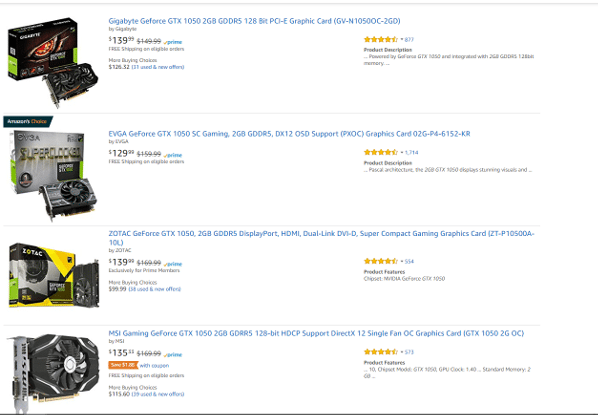 Cons:
-Unsuitable for beyond 1080p gaming, due to the 2GB of VRAM
-Can get better value for your money with more expensive models

The bigger sibling of the 1050, GTX 1050 Ti utilizes the Pascal architecture while offering an affordable solution for a gaming PC. With a larger count of cores and 4GB of video memory, it's a beefier version of the entry-level 1050. 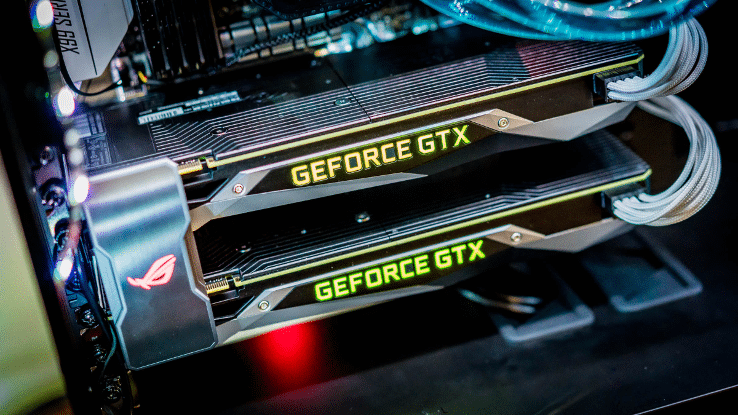 GTX 1050 Ti is equipped with Nvidia’s GP107 processor, the same chip that we will find on the 1050. But it comes with more CUDA cores and, of course, two extra gigabytes of video memory.

The feature that makes it stand out from its competition is the energy efficiency. At most, it requires only 75 watts to run. GTX 1050 Ti gets all of its power through the motherboard, without the need for an additional PCI-E connection to the PSU.

You won’t have problems running any current game with GTX 1050 Ti. You will probably need to lower the graphics settings a bit in AAA games, but they will be completely playable in around 40 FPS. 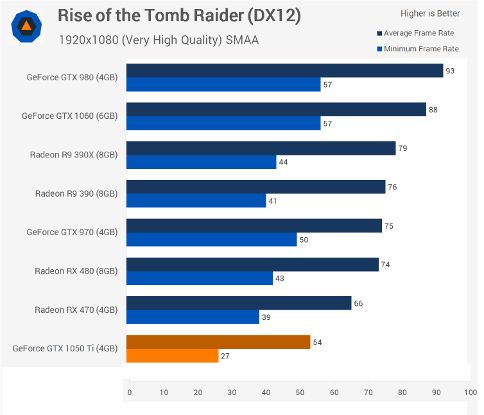 With GTX 1050 Ti, you can build a respectable gaming PC for under 500$. Which is impressive, considering that you are not going to need an upgrade on your GPU for the next two to three years. 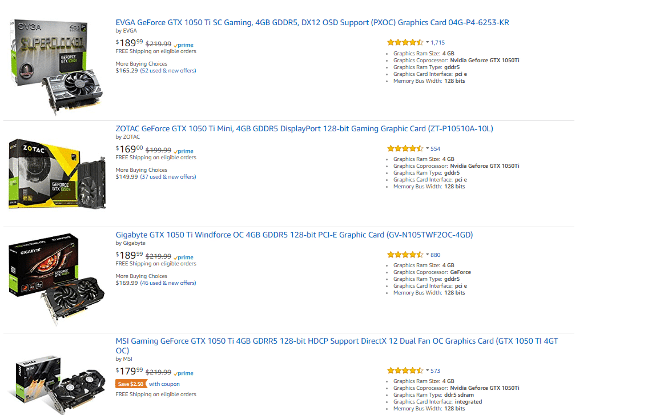 Similar to the 2GB non-Ti version, 1050 Ti is also ideal for replacing an ancient GPU on an any build, due to its low energy consumption. We won’t have to spend those extra bucks for a new PSU.

Pros:
-Excellent value for money
-With a few compromises, it can run any game
-Low energy consumption

Cons:
-Will need to lower graphics quality on demanding AAA games to get playable FPS

AMD’s 560 series was a bit underwhelming. Nvidia’s 1050 series provides a lot more value for our money in a similar price range. But RX 570 can make a case for the best midrange GPU right now. 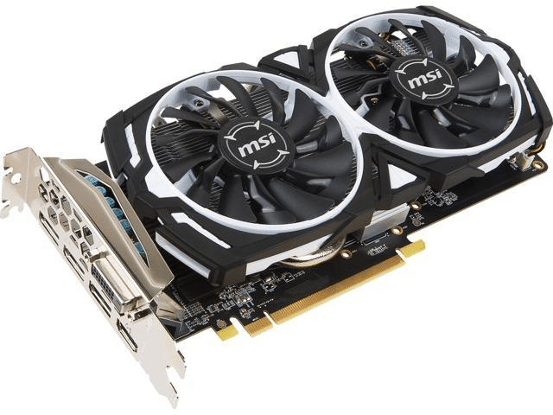 AMD redefined and tweaked the Polaris technology used in the RX 470. Seems like they learned from their mistakes and finally managed to produce GPUs with reference clocks far higher than their predecessor.

RX 570 can maintain 60 FPS, even with the most graphically demanding games at top settings. For 1080p gaming, you won’t have issues running any game.

Also, with Freesync monitors being considerably more affordable than G-sync models, this is another win for AMD's corner, for smooth gaming motion without tearing or other artifacts.

However, if you are using a 1440p monitor, or intend to get one in the next year or two, you will need a card with better specs. 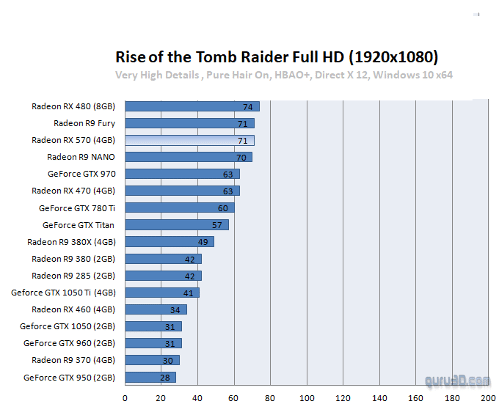 The 4GB of VRAM seems promising for our built’s future. RX 570 will be able to run new games in high settings at least for the next two to three years.

We would recommend RX 570 for anyone looking for a budget GPU to enjoy 1080p gaming. If you either building a new rig or upgrading your two or three years old PC, AMD’s mid-level GPU can be ideal. 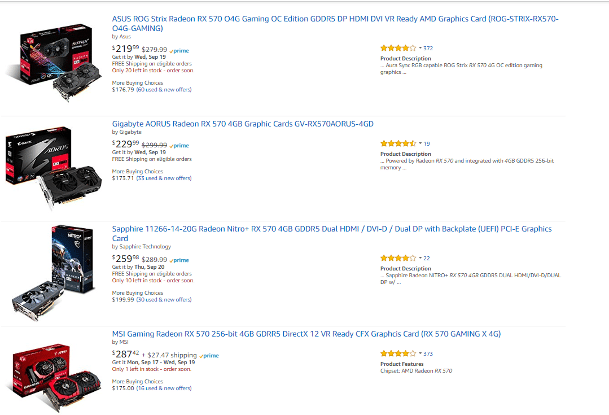 We wouldn’t recommend buying it if you already have RX 470 or a similar GPU. The improvement in the performance won’t be enough to justify the cost.

Arguably the best mid-level budget GPU right now, GTX 1060 3GB is aimed at those who want gaming at 1080p. It offers unbeatable performance for the price range, but it comes with a questionable future due to the amount of available video memory. 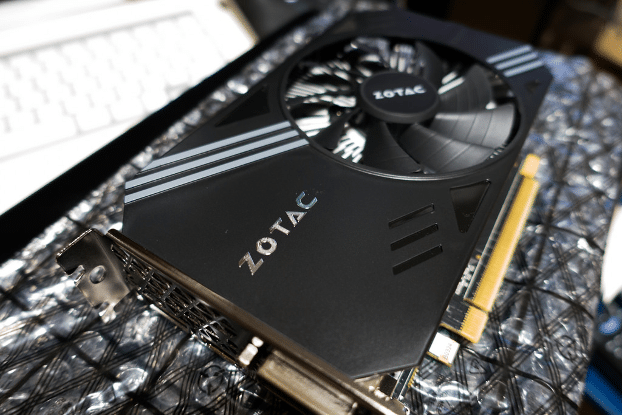 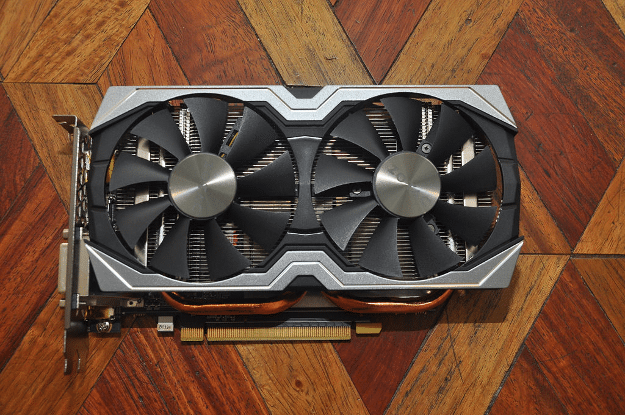 The 3GB of VRAM is an odd choice, provided that the lower end GTX 1050 Ti comes with an extra Gigabyte. Even so, GTX 1060 will perform better than the 1050 Ti in every conceivable gaming workload.

In various benchmarks, GTX 1060 3GB had a slightly better score compared to Radeon RX 570 4GB. Although, it is essential to keep in mind that Nvidia cards perform better in games built with the Unreal engine, compared to AMD cards. 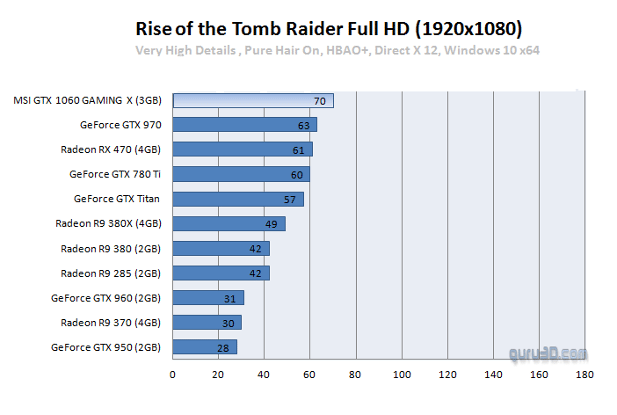 The GP106 chip has the power to run even 1440p gaming. But Pascal’s excellent memory compression can only go so far.

Games with high demand for large textures can result in stuttering, and our GPU will struggle to maintain performance, as opposed to the 6GB model, which easily provides +10 FPS. 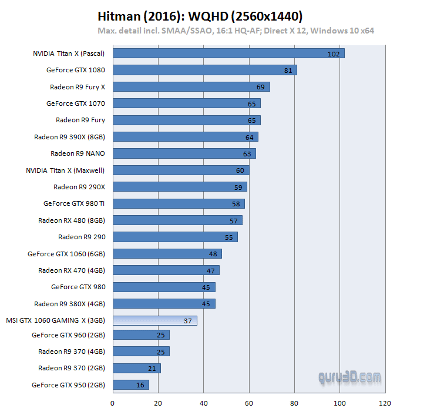 VRAM demanding games is the only challenge the GTX 1060 will face. And even then, it  will only take a minor compromise in texture quality, to keep our FPS steady.

GTX 1060 3GB, is the perfect GPU if you are a demanding gamer that tends to upgrade the graphics card every three years or so. It will serve your gaming needs without issues for a short-term period.

But if you want to invest in something that will last you a bit longer, a GPU with more VRAM, such as the 6GB 1060 might be a better option. 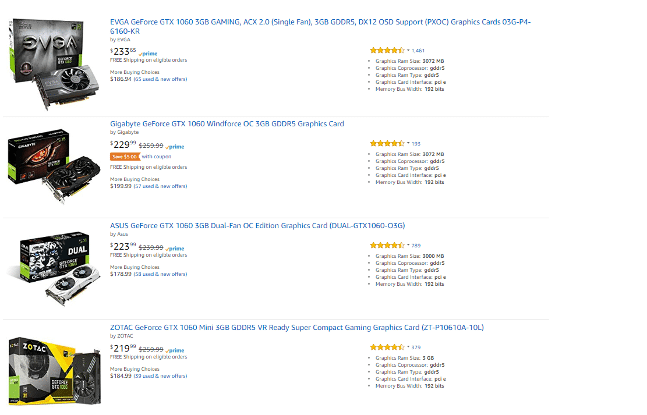 What's the best budget GPU for gaming in your opinion?

Do you have any positive or negative experience with any of those cards? Do you think there is another model that we should have mentioned? Let us know in the comments below.