Top
Home » Software » Browsers » Which Is The Fastest Browser On Windows 10? 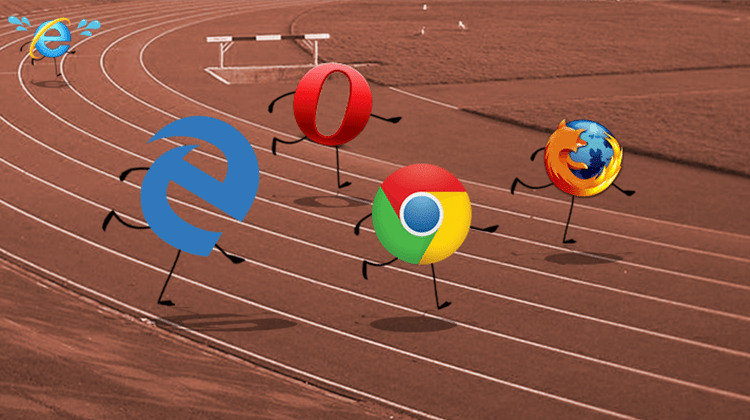 Most of the activities we do on a computer, we can do them online through a browser. So, it goes without saying that a fast browser can have a significant impact on our productivity. In this guide, we have compared the speed of the most popular browsers on Windows 10, including the latest Firefox Quantum, running a series of trusted benchmarks to determine the objectively fastest browser.

Why do we need a fast browser?

Browsers are among the most critical applications on any internet-connected computer. In fact, we most likely use our browser more than any other program.

Especially in the past few years, with the rise of the cloud services, browsers have found uses beyond mere browsing. For every task we do on a computer, there’s arguably a webpage that can do the same thing. 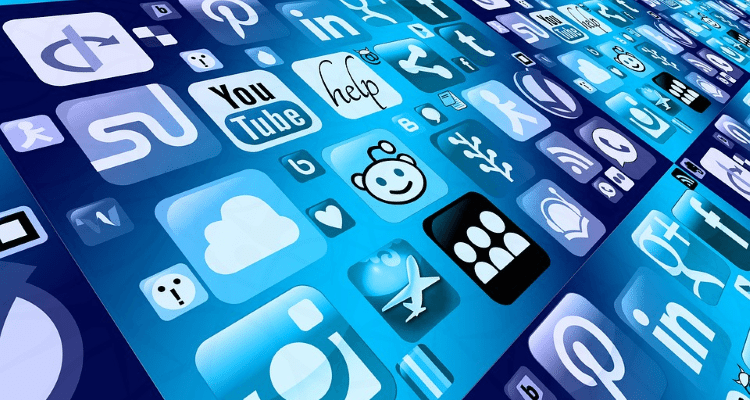 For example, we use webmail instead of an email client, or Google Docs instead of an office suite. Other times, we might watch videos and listen to music online, instead of downloading these files for playback locally.

Some websites allow us to edit photos and videos, without installing any third-party program. Not to mention the various social media sites, which occupy a significant portion of our free time.

For someone that wants to do all the above - and much more - a fast browser is a necessity. A slow browser not only delays our tasks, but it can also become irritating. 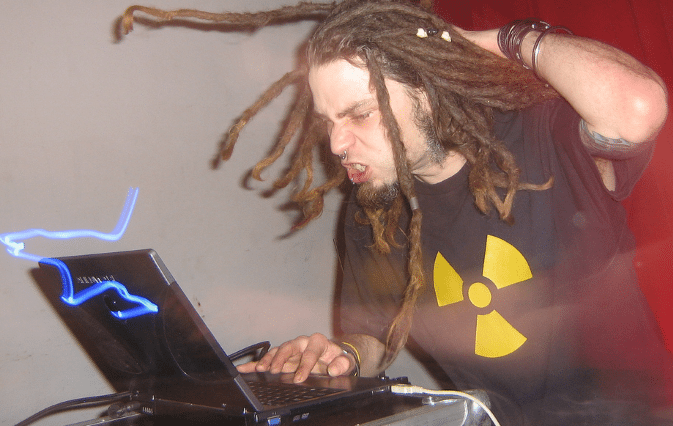 Of course, most of us choose a browsing program depending on other variables as well. We want it to support the extensions we use, or to have an elegant design.

An increasing number of users prioritizes security and anonymity. And other reasons might lead us to a specific browser, ranging from personal taste to brand loyalty.

In this guide, we will focus exclusively on browser speed. The fastest browser might not be the best browser for you, but if you have the need for speed on your internet browsing, here's how each major browser ranks.

We should mention that a computer’s hardware has a significant impact on the speed. To meet the requirements of an average PC, we made our tests on a dual-core virtual machine with 4GB of RAM. 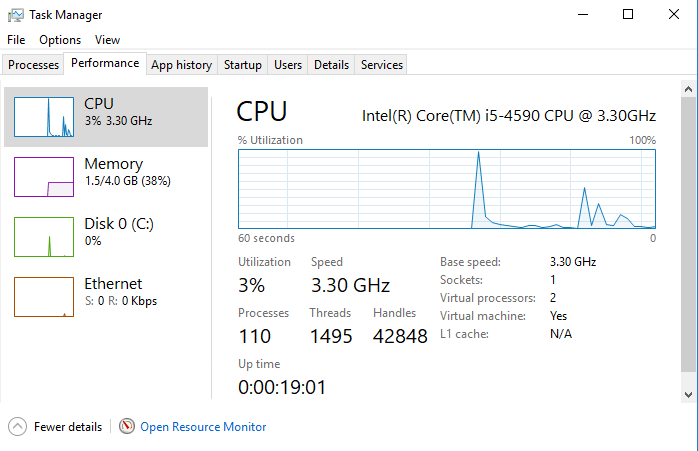 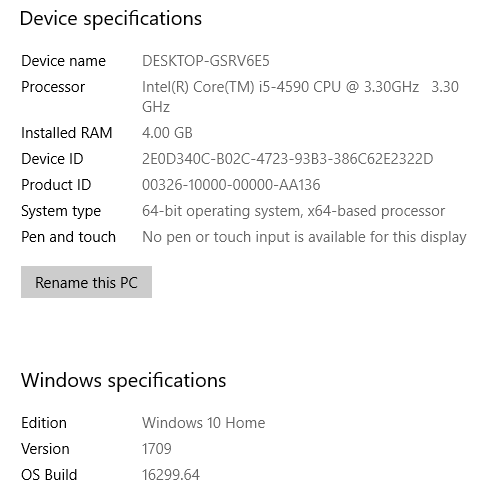 The most popular browsers

Chrome, Firefox, Opera, Edge, and Internet Explorer have the most significant share in the market. We excluded Safari since we are comparing the browsers only for Windows.

Until last year, Chrome was apparently the fastest browser to use. 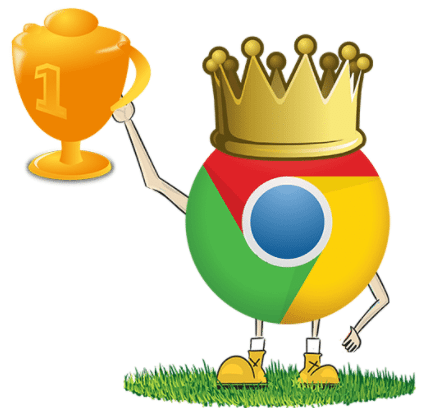 Edge was taking his first steps, while Firefox seemed old and not competitive at all. Opera had - and still has - a tiny usage share, and we can’t say we know why some people insist on using Internet Explorer in this day and age. 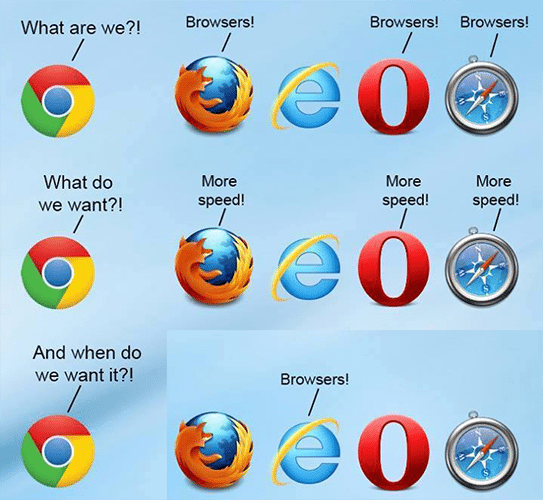 What changed this year?

In 2017, the usage percentages haven’t changed at all since 2016. The most considerable portion of users still uses Chrome.

Edge and Internet Explorer, as well as Firefox, are miles behind, while Opera is pretty much non-existent.

However, we may see dramatic changes in the speed tests, as the browsers have improved a lot - Internet Explorer is yet again excluded.

Firefox Quantum is the new version of Firefox that was released recently - in November 2017 - and promises that it’s the fastest browser out there. 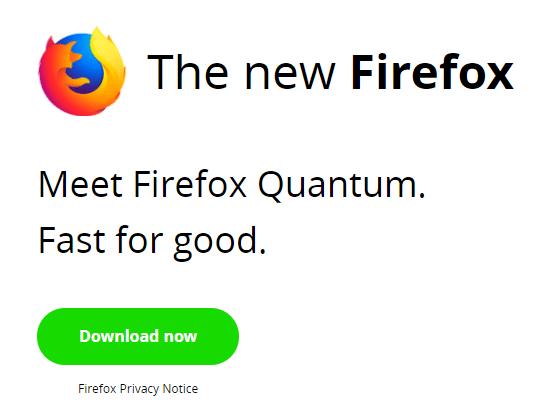 Mozilla argues that the new Firefox is also lighter, but in this guide, we won’t compare memory usage. We are only interested in speed.

Microsoft upgraded Edge as well, and the company claims that it is the fastest browser for Windows. 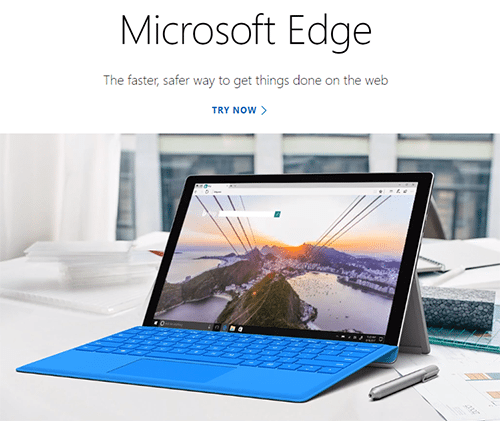 Let’s see who will win the first place.

Browser benchmarks are a variety of tests that measure the performance of a browser on various tasks. These tests are usually online and do not require a lot of time to run.

The versions of the browser we tested were the following:

All the browsers used in the trials were clean, with no add-ons that may affect their performance. Also, we did the measurements on the same virtual machine.

We performed each measurement multiple times, and the results show the average score.

JetStream gathers a series of JavaScript metrics, and the overall result is the combination of these parameters. 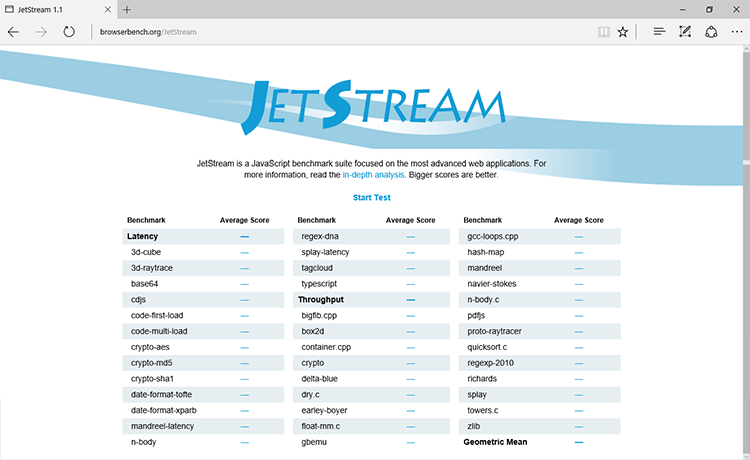 In this benchmark, the fastest browser is the one with the highest score. 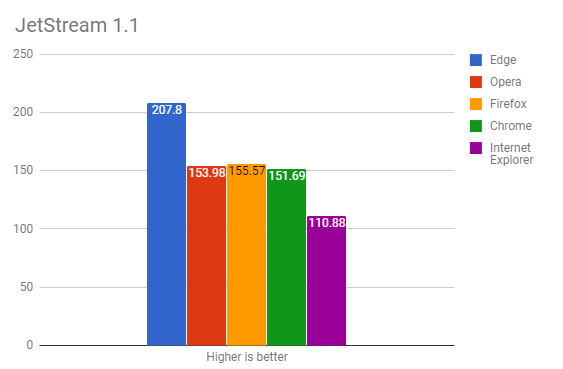 Edge was first in this benchmark with a significant difference compared to the others, which surprised us.

Chrome, Firefox, and Opera have a tiny difference between each other, so we can say they ranked second. Last is Internet Explorer, but that was no surprise at all.

Octane is Google’s benchmark that tests a browser’s speed in JavaScript. It uses a series of individual tests based on the most complex web applications the average user may use. 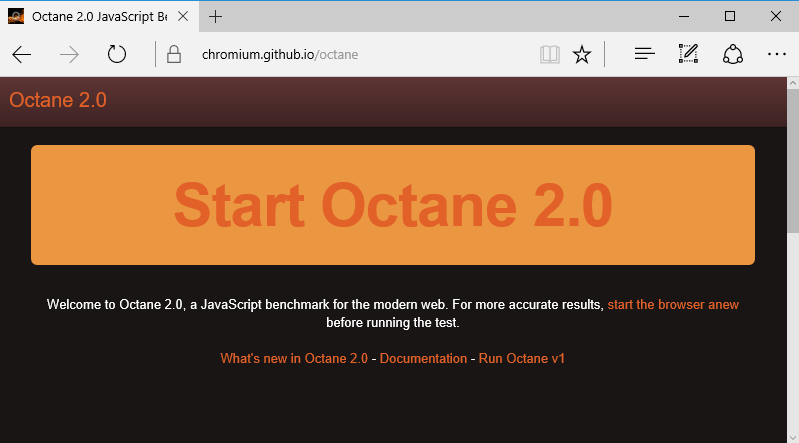 Just like in JetStream, the higher the score, the better. 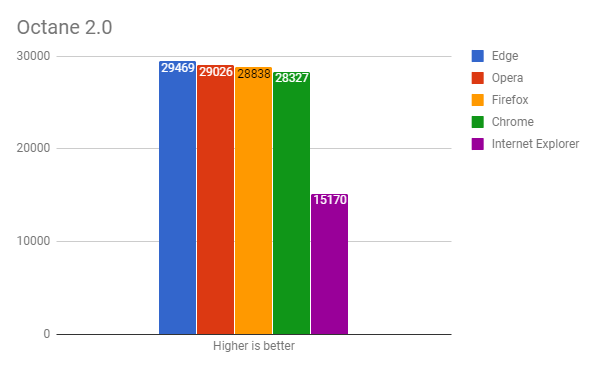 One would expect Chrome to come first since Google developed the benchmark. However, Edge took the first place once again.

With a minimal difference, Opera, Firefox, and Chrome follow behind. We do not need to point out that Internet Explorer is at the bottom of the list.

Kraken is the legendary sea monster that looked like a giant squid and terrorized the seas in various novels and movies. 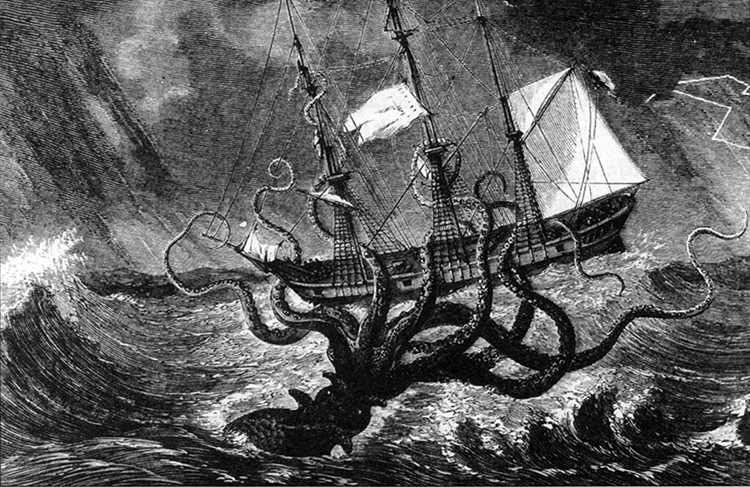 Apart from that,  Kraken is the name chosen by Mozilla for their JavaScript benchmark.

This benchmark measures audio, image, encryption, and more. It is a more straightforward test based on everyday browser scripts.

Unlike previous tests, the fastest browser in this benchmark is the one with the lowest score. It is probably the only way for Internet Explorer to get the most prominent bar on the chart. 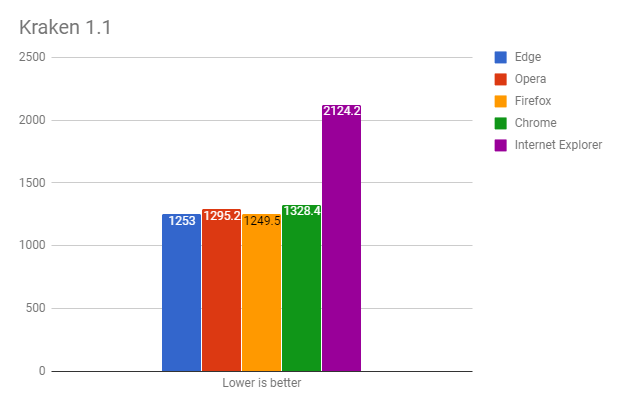 Firefox came first with a minimal difference from the rest. You might think that the benchmarked is biased since Mozilla created it. However, we have seen low scores in previous versions of the browser.

Second is Edge, with Opera and Chrome right behind it.

In short, it uses several scenarios to reflect tasks that we can run daily in our browser. Thus, it may be one of the most reliable metrics to find the fastest browser in real-world scenarios.

Once again, the higher the score, the better. 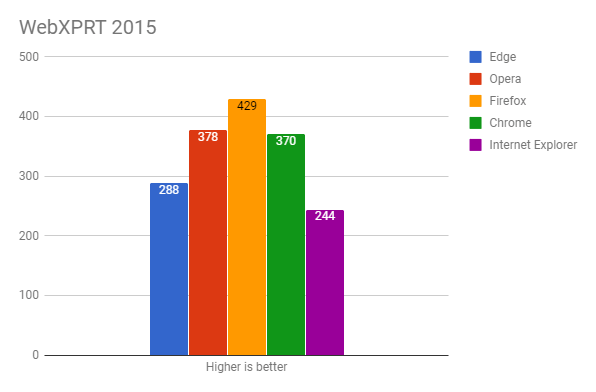 Here, Firefox won the battle. Opera and Chrome were pretty close behind, while Edge was further back.

Lastly, with HTML5 being the future of HTML, we could not skip a benchmark that measures whether a browser supports it.

The HTML5 Test gives one or more points for each feature of HTML5 that each program supports. 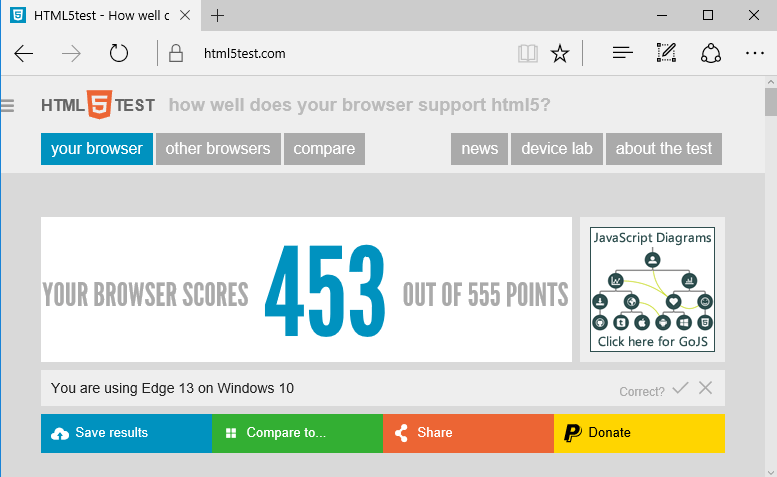 Although it is not a speed test directly, it is essential to know how many of these features can be used by our browser.

The maximum score is 555 and, of course, the bigger, the better. 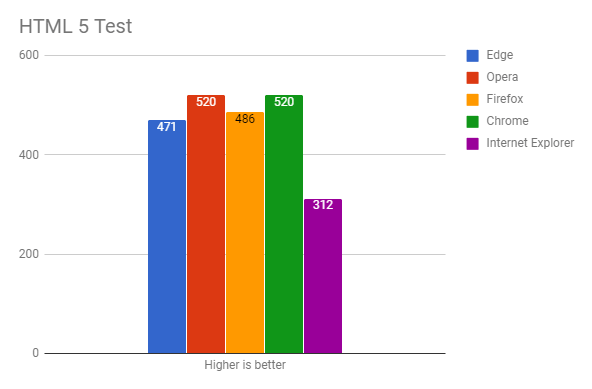 Here, Chrome and Opera rank first, allowing more support for HTML5. Firefox is third, with Edge a few steps behind.

Internet Explorer is again the last one since it only supports 312 of the 555 HTML5 features. It is worth mentioning that last year he supported more (345).

Impressive results, but where do we end up? Who is ultimately the fastest browser?

We do not know what Microsoft did in the new version of Edge, but it seems to have worked - at least regarding speed. Edge, leading first in two of the four speed tests, managed to take the lead. 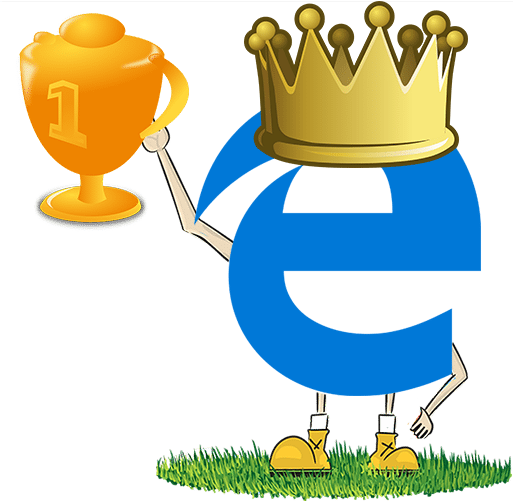 As for the others, Opera came second, Firefox Quantum third, and Chrome was last - although with minor differences.

Which browser do you use?

It is true that Firefox Quantum has managed to overcome Chrome - at least in our tests - though it was not competitive until recently. We would say that Mozilla responded to the expectations of users who were loyal to the good ol’ Firefox.

However, we saw that Microsoft's outsider took the first place in our race.

Of course, speed is not the only criterion for choosing a browser, especially when we talk about such small differences that are not even visible in use.

The issue of security is just as important, as is the consumption of RAM for older computers.

There are even more fundamental criteria, such as extensions supported by the browser. Edge suffers in that part, unlike Chrome and Firefox, who are more mature.

Also, it is crucial that Edge did not do so well in the benchmark that uses everyday scenarios to measure speed. This means that it may not be the fastest browser for everyday use, so let's not rush to switch from any browser we already use.

How to Change Default Browser in Windows 10

Who do you think is the fastest browser and how often do you use it? Write us in the comments if you are happy with your browser and if you would change it for something quicker.

Previous Post: « How New Gmail Add-ons Can Enhance Our Productivity
Next Post: How To Boost The Internet Speed With the Proper TCP/IP Settings »